This story was published on December 8, 2020. Curator Nigel Borrell has since left Auckland Art Gallery.

Te ihi, te wehi, te wana are concepts in te ao Māori that provide a handy vocabulary, lacking in English, for describing great big feelings. Te ihi (essential force), te wehi (a response of awe in reaction to ihi), and te wana (exhilaration) are often used to describe the response to haka, that lifting of your emotions to an almost unbearable point, and the high you feel as a result.

It’s also the only way of describing my response during my first visit to the incredible new exhibition of Māori contemporary art, Toi Tū Toi Ora, at the Auckland Art Gallery.

Filling the curator Māori role vacated by Ngahiraka Mason in 2015, artist and curator Nigel Borell (Pirirākau, Ngāi Te Rangi, Ngāti Ranginui, Te Whakatōhea) first pitched this show in his interview for the job at the gallery. Five years in the making (and another 70-odd years before that), it’s the largest survey of contemporary Māori art in 20 years, involving 110 artists, and more than 300 works.

“The whole show is really ambitious, and I just thought ‘I hope this works’,” Borell told me on a walk around the first floor of the show, the week before the grand opening.

He said he chose the Māori creation narrative to guide the curation of his exhibition, which has taken over Auckland Art Gallery’s entire exhibition space.

“I wanted to ground it in Māori worldview, as opposed to the western fine art world telling us where we fit into the art scene. Even the diverse understandings of the creation narrative, it was the one thing that we as Māori all had in common, so it became the elemental way of introducing a conversation about contemporary Māori art.”

It starts with Te Kore: the void, the potentiality, the pure, unformed energy at the beginning of time. It has parallels, Borell explained as he led me into the first room, with theories by physicists that our ever-expanding universe was birthed from a black hole. Plunged into darkness, Peter Robinson’s ‘I exist I am not another I am’ met us at the door, questioning a nothing/being binary (or are they ones and zeros? Or the name of Io, the supreme being?). A film work of stars by Reuben Paterson sat opposite Robert Jahnke’s ‘Whenua Kore’, an infinite window of light, extending the space in disconcerting ways. They invited us further into the darkness to discover what lay at the end of the room – Ralph Hotere’s ‘Black paintings’, but as you’ve never seen them. In the darkened space it wasn’t the familiar black panels that defined them, although the energy of those depths was still thrilling, but the thin vertical and horizontal beams of colour piercing the night, like the very first glimpses of light on the horizon.

“Of course Ralph wasn’t big on talking about his work, but he loved the colour black,” Borell told me, while I, slightly overwhelmed by their beauty, struggled to compose myself. “It was the ceaseless truth in his practice. For him, it wasn’t a dense colour full of nothing, but a colour full of potential. So just like our narratives talk about darkness holding potential, he was mining those philosophical ideas in his own work.

“We try to pay homage to that nothingness, and the murmurings of being.” After Te Kore came Te Pō, the night. Another darkened room but the forms were a bit brighter, bolder. “The beginnings of life are starting to take shape. The artworks in this room use shadow and light, and use transformation as a way to talk about some of those ideas,” Borell explained. We admired a glistening bronze river by Israel Tangaroa Birch, reaching through the room from this world into the next.

Through the next archway, Lisa Reihana’s ‘Ihi’, a tall, impossibly high-definition video work, told the story of the separation of Ranginui and Papatūānuku by their son Tāne Mahuta, and the creation of Te Ao Mārama, the world of light and understanding. Opposite, as if observing, sat Robyn Kahukiwa’s ‘Hinetitama’. There are some artworks that feel as familiar as family. Meeting Kahukiwa’s painting face to face brought back my swirling emotions again. For a second time, I castigated myself for fighting back tears.

I was struck by how meaningful it felt that young and old artists were sharing the spaces with such ease, no hierarchy, just whanaungatanga. Borell connected it back to the desire to disrupt institutional norms. “If we’re going to deconstruct the western art canon, then it’s about seeing us as a collective across generations. We’re having conversations with each other across time.”

The final gallery we visited, at that time not yet open to the public, was dedicated to the transition back to night, from life to the afterlife. “In this room we acknowledge the passing of day into night, the world of the living to the afterlife. So just as we do in the meeting house, we pay tribute to Hine-nui-te-pō, who looks after us in the after life.”

At first it was Michael Parekowhai’s huge elephant bookend sculptures that demanded attention. They’re hard to miss. Borell described them as “philosophical bookends to this idea of being”.

But it was the piece standing high at the end of the gallery that stopped me in my tracks.

Commissioned by Borell especially for the exhibition, wāhine collective Mata Aho’s large-scale textile installation named ‘Atapō’ looks at the story of Hinetītama, the dawn maiden, and her transition to becoming Hine-nui-te-pō. Two stories of layered black cloth with shrouded waharua-shaped windows through the work offer a glimpse beyond the veil from both the ground floor and the mezzanine above. Behind it sits it a second work by their mentor Maureen Lander, a lighter waterfall of materials adorned with hand-dyed muka in the colours of the dawn. Motion-triggered sensors filter the sound of the tīwaiwaka into the space, the messenger who warned Hine-nui-te-pō of Māui’s plans to enter her vagina in the pursuit of eternal life. 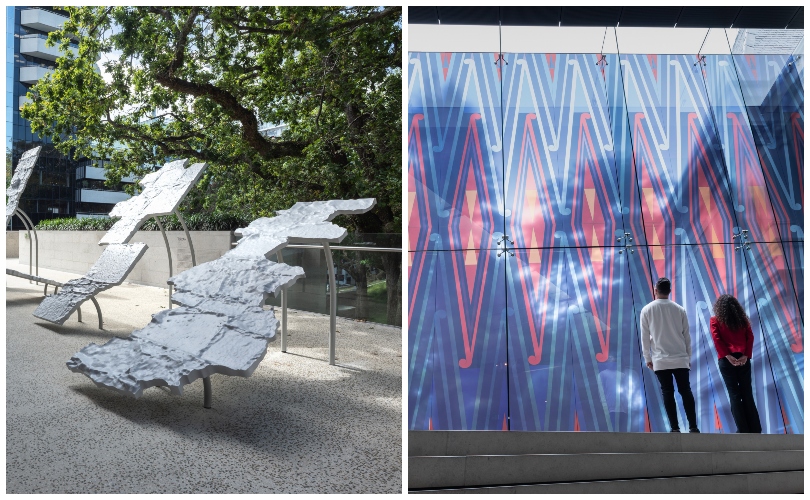 “Often in our narratives you hear about the male gods but not as much about the women, so in this room we wanted to pay tribute to women, by women. Such as the original ‘Digital Marae’ by Lisa Reihana, looking at our wāhine demi gods,” he said, pointing to Reihana’s spectacular digital print of ‘Mahuika’.

“It was important to have a good mix of male and female voices, and we actually have more women than men in the show, it’s about 60/40. Partly purposeful, partly just responding to what I feel is important and needs to be seen.”

For a third time I gulped down my emotions, coughing loudly to cover the quiver in my voice. Borell kindly assured me I wasn’t the first to become emotional. “For Māori who have a sense of this mātauranga, they’re going to come into this space and have a very different connection to this show. And someone who doesn’t, they’re going to learn it.”

It wasn’t until the following Friday that I got to see the rest of the exhibition. On the morning of the grand opening, at 4.30am, hundreds of people gathered for the dawn blessing. Led by Borell and Ngāti Whātua kaiārahi, the large group snaked through the galleries, up and down stairs, giving karakia to the work, its creators and those tasked with its care. Painting, weaving, carving, sculpture, video, jewellery and adornment, photography, ceramics – room after room of taonga unearthed by Borell and his team from the gallery’s collection, museums, public and private collections, and the living room walls and basements of artists and their whānau.

Lacking the vocabulary to describe art in terms that the art-literate would deem adequate, I can only tell you how these works made me feel. Proud. Sad, at times, thinking about the number of artists who weren’t given the same spotlight or accolades as their peers at the height of their careers. Surprised at how broad the expression of Māoritanga can be. Overwhelmed with gratitude to artists for teaching us about ourselves, and to Borell for fighting for the show.

And even then sharing these feelings can’t accurately describe te ihi, te wehi, te wana. So you’ll just have to go and see it for yourself. You’ll see what I mean.

I am writing an allegorical novel about alpaca breeders and democracy