Charlotte Muru-Lanning lifts the lid on an intriguing legacy.

When Māori Party MPs Debbie Ngarewa-Packer and Rawiri Waititi were sworn into parliament last week, both wore impressive hats. Their top hat and cowboy hat drew mostly praise, but also some criticism and confusion. In fact, some responses bordered on horror. How dare Māori wear hats!

People needn’t have been so shocked; Māori have been wearing all kinds of hats, headdresses and other head adornments for ages. Traditionally, bone, stone or wooden combs along with feathers, flowers and leaves were used to adorn the head – the most tapu part of the body.

Hats have played important roles in the public image of many notable Māori too. There’s Tāwhiao, the second Māori king, and his wife Hera, who were photographed multiple times wearing top hats. Mita Taupopoki, leader of Tūhourangi and Ngāti Wāhiao, famous for his ornate hats – adorned with feathers. Te Puea in her iconic white headscarf or Dame Whina Cooper with her brilliantly coloured versions. Poet Hone Tuwhare with his wool flat caps. Academic and writer Ranginui Walker and musician Dalvanius Prime with their respective fedoras of various brim sizes and materials. Activist Tame Iti with his famous bowler hat. Moana and the Moa Hunters in their 90s pan-African kufi and Zulu hats. Che Fu, with his various caps, beanies and bucket hats – far too often overshadowed by his famous backpacks. Even ex-Green leader Metiria Turei celebrated the passing of the vote for the 2013 Marriage Equality Bill in a feathered pink fascinator. Not to mention all the variations of impressive pōtae worn at marae events by kuia and kaumātua. Māori have always worn head adornments as symbols of authority, prestige and honour. 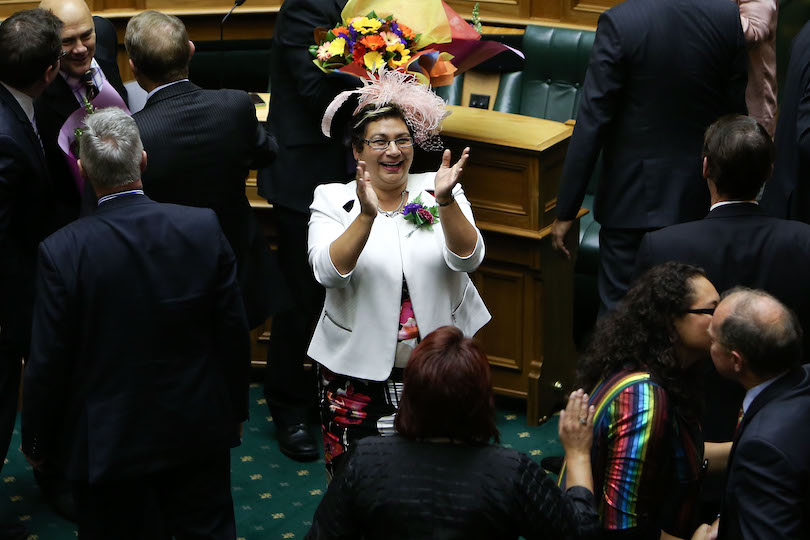 Metiria Turei during the vote on the Marriage Equality Bill in 2013 (Photo: Hagen Hopkins/Getty Images)

A bold hat has become a visual expression of being unapologetically Māori. They also literally take up space. So, it makes sense for Māori politicians to wear them to amplify their presence and to disrupt Pākehā norms.

“For Māori, the head is a very sacred part of your body. We always call the head tapu because it’s where you hold all your knowledge – it’s where whakapapa is held, karakia is held,” says Māori Party MP Rawiri Waititi. He sources his iconic cowboy hats from Australian brand Akubra and American brand Stetson and believes that “if you wear a hat, you should wear a good hat”. 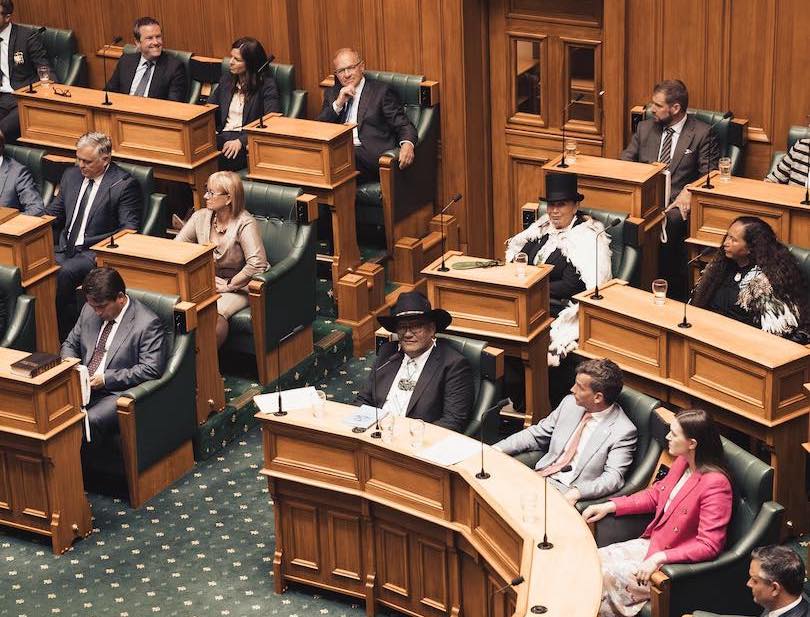 When the Māori Party threw their pōtae into the political ring again this year, the then Waiariki hopeful Waititi stood out immediately with his signature cowboy hat.

“It’s not just fashion – although I do like the look of it – but there’s sentimental value to why I wear the hat.”

Waititi, brought up on a dairy farm, wears his cowboy hat as a nod to his rural roots as well as to his tūpuna who fought in World War II. Their company within the Māori Battalion was also known as Ngā Kaupoi (cowboys), because horses were a common mode of transport along the East Coast.

For Māori, clothing can convey a range of information about the status of the wearer and the region they’re from – it plays an important part in iwi dynamics and identity. So while on the East Coast the cowboy hat has continued to be popular since World War II, the Kiingitanga have green tartan shawls or blankets and Ngāti Porou have purple scarves. These items of clothing have become a way for Māori to express associations with particular groups.

The regional significance of the hat is also reflected in Te Rohe Pōtae (area of the hat), the alternative name for King Country. The name stems from King Tāwhiao, who is said to have delineated the area of land by throwing a hat down on a map in the late 1870s. As we know, the head is sacred to Māori, and the idea that the pōtae related to authority over land was derived from the crown worn by Queen Victoria – a symbol of her authority. While the name “Te Rohe Pōtae” is most often associated with the King Country, it’s also used elsewhere to refer to autonomous Māori land.

While some have reacted with outrage at the pair for “breaking the rules” of parliamentary dress code, Waititi has checked the tikanga around wearing hats indoors. “If the roof is high, you can wear them.” In fact, historically there was a whole raft of rules and etiquette around hat wearing in New Zealand parliament. For example, if an MP wanted to speak after the doors had been locked for a vote, they had to be seated and wearing a hat. These days, it’s up to MPs whether or not they wear a hat. To everyone who has voiced concern – you can sleep easy tonight, Waititi and Ngarewa-Packer haven’t broken any rules. Chanel Clarke (Ngāpuhi, Waikato), is curator Māori at Auckland Museum. Clarke’s research looks at the social and cultural aspects of clothing and textiles – in particular, clothing worn by Māori in the 19th century.

Clarke explains that Ngarewa-Packer’s choice of colonial-esque outfit punctuated with a top hat harks back to when Māori began wearing European clothing – a style of dress that we’ve most likely all seen in 19th-century photography of Māori. Instead of dressing by European norms, many Māori “adopted and adapted” pieces of clothing. Shirts might be worn as scarves, piupiu or kākahu would be cloaked over blazers or lace dresses, and wāhine would wear hats traditionally reserved for men. In response to a commenter on Facebook questioning her choice of hat, Debbie Ngarewa-Packer replied defiantly: “As a wahine I’ll wear what I want”.

“It shows Māori agency in the way they’re dressing and that they weren’t bound by those European norms; so if a woman wanted to wear a top hat or a bowler hat, she would,” says Clarke.

Similar examples exist in other indigenous cultures too – Aymara and Quechua women in Peru, Bolivia and Ecuador wear bowler hats as a way of reclaiming their indigenous identity.

Historically, Māori women wearing hats was a way for them to display their status and to play with gender norms. According to Clarke, Ngarewa-Packer’s choice of hat clearly references these ideas.

In many ways these hats parallel the position of the Māori Party within parliament too. Just as wearing these hats is a disruption of Pākehā norms, so too are their political goals. It’s about taking Pākehā ways of doing things – whether that’s wearing hats or making legislation – and modifying them to liberate and empower tangata whenua. They’re also a joyful acknowledgement of tūpuna – a sentiment echoed last week by Rawiri Waititi in his maiden speech as he replaced his necktie with a bone pendant: “I will adorn myself with the treasures of my ancestors.”

“They’re making that political statement; this is who we are, this is where we’ve come from and as we move forward, we intend to keep referring back to those people who have put us here,” says Clarke.

Wearing a hat for Māori can be a totally practical decision; something to keep the sun off our faces, to hide a bald spot or bad hair day, to protect ourselves at work or to keep our heads warm. But the unwavering significance of pōtae throughout our history means that wearing one can also be imbued with a whole lot more meaning and be one small way of walking backwards into the future: ka mua, ka muri.