Māori journalists are used to receiving racist messages. Sometimes you get one that just hits different, writes Te Aniwa Hurihanganui for RNZ.

I shouldn’t have been checking my work emails. It was a Saturday night and I was in my favourite place, my grandparents’ house, where the rooms carry memories of my childhood and the walls hold the faces of my tūpuna.

In the kitchen, my whānau were sitting around the table, stuffing their faces with nana’s roast dinner and enjoying our first gathering since emerging from lockdown. My three-year-old niece, who shares my middle name Māreikura, crawled on top of me when I heard my phone ping. I lifted her little body from my lap and sat her down beside me as I opened an email from a sender I didn’t recognise.

“You are a European hating member of a slightly brown group of people who represent NZ’s worst stats,” the email said.

I was taken aback. Before I had time to comprehend what I’d read, there was another ping.

“Like all so-called Māori in this country, you have a chip on your shoulder a mile wide. Report on Māori gang members, Māori rape rates, Māori murdering their partners and children, drug use, unemployment, fraud.

Perhaps, if I was somewhere else, surrounded by different people, I might have laughed it off and deleted it. That’s what I usually do when I receive racist emails, and I receive a lot. But this time felt different. I looked over at my family, who are none of the things the sender described; who nurture and love me, who protect and guide me. I looked at my niece, who was so small and so beautiful, and the thought that she might one day receive a message like this made my heart sink.

Before I knew it, tears were rolling down my face. 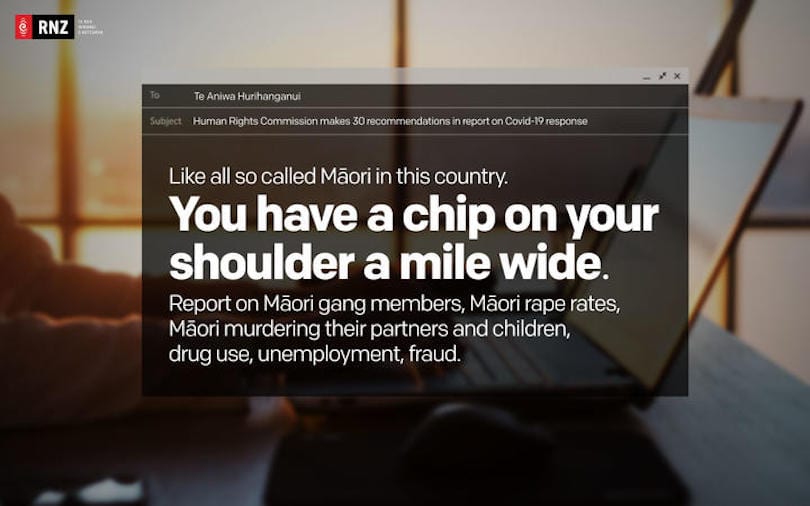 My reaction surprised me. Since I began my career as a Māori news journalist, receiving racist emails has just become a normal part of the job. I spend a lot of my time writing stories about racism and every time I do there comes a tidal wave of offended Pākehā in my DMs – not offended at the racism but offended that I’ve called it that. They’ll accuse me of being a Māori activist disguised as a journalist. Every time I publish a story about the state taking a Māori baby from a mother someone will cry: “But Māori are just bad mothers!”

If I mark the anniversary of a historic event where Māori rights were trampled on, such as Parihaka, someone will tell me Māori deserved it because they were “cannibals” and “lawless”.

Don’t even get me started on Māori wards: “Special treatment!” “Racist to Pākehā!” Eye roll. I’ve heard it all before and I’m sure Māori journalists everywhere have too.

The messages and emails are not only predictable and boring, they’re also stupid. They’re the same baseless, tired arguments conservative white New Zealand has clutched at for years to justify colonisation. And they reek of fear and shame.

So why was I so affected this time? Maybe I wasn’t – maybe I was just tired of it all. In this job I’ve learned a lot about what it means to be Māori. I’ve met Māori teachers and nurses who have taken to the streets to demand better pay. I’ve met activists who flock to parliament at every opportunity to challenge racist policy and laws.

I’ve met people who dedicate their lives to revitalising te reo Māori, or reclaiming it. I’ve met iwi leaders, students, volunteers and coaches who each have their own unique stories and life experiences. But there is a common thread in all of their stories.

Māori are always fighting for something.

But it’s exhausting taking on that fight with them and then coming home to our own each day.

Reporting and finding the sender

The emails reminded me that the fight doesn’t end when I clock off for the day. It reminded me of how tired I was talking about racism, and writing about it, and living it.

My whānau reminded me that day why we must fight. When they eventually realised something was wrong, I reluctantly showed them the emails.

Within seconds my siblings had come up with a number of possible plans of attack. I could make a complaint under the Harmful Digital Communications Act. I could expose the sender online. I could respond. My older brother, who somehow managed to track the sender’s number and address down from an old advertisement online, was eager to deal with the situation the “old-fashioned way”.

What I saw in each of them was a desire to do something, anything, to make sure the sender would never bother me again. And I realised then why we fight racism. We fight so that our siblings, our nieces and nephews and their children, don’t have to.

Instead, I told my work, who promptly blocked the sender from ever messaging me again. I also considered a Netsafe complaint but decided I’d go a step further and report the sender to the police.

I remembered a story I’d written about the Māori language academic Vincent Olsen-Reeder, who had received racist emails of his own and did the same. The police can set up a file and monitor future emails from the sender. They can also contact them directly.

A few days later I got a call back from the police. They’d paid the sender a visit, who turned out to be a white, older man. Shock. The man told them a friend had taken his phone and written the emails on his behalf. The police gave him a warning and left him alone. It’s the outcome I was expecting, but it gave me some comfort imagining his face when police came knocking.

I guess, looking back, I shouldn’t have checked my work emails on a Saturday night at my grandparents’ house because it allowed an age-old racist rhetoric to slither its way into my safe place. But it’s because of this safe place, my tūpuna on the walls and my whānau who raised me, that I know such rhetoric is unacceptable. It must always be called out and condemned.

My work allows me to write stories about incredible people, iwi and communities who work every day to improve the lives of those around them, and it’s a true honour. Disrupting narratives and deflecting racist emails are my small contribution to dismantling the colonised mindsets and institutions that this nation is built on.

It’s an uphill battle and burden that I hope my niece Māreikura will never have to carry. But, until then, ka whawhai tonu mātou.