James Stephens* was a teacher and voracious reader until 2015, when a stroke took his words. After years of speech therapy and hard slog he has now written – written – a book for others who have aphasia, and for those who love them. Books editor Catherine Woulfe reports.

n. Partial or total loss of the ability to articulate ideas or comprehend spoken or written language, resulting from damage to the brain caused by injury or disease

My dad has a form of aphasia that came out of nowhere and gets worse over time. It eventually leaves a person silent and shut in, unable to make sense of books or media or, most cruelly, conversation. Primary progressive aphasia, it’s called, and it’s a kind of frontotemporal dementia. He was diagnosed nine years ago, at 55, and has now deteriorated to the point that he needs hospital-level care. My dad is stubborn as all hell and he hated what was happening to him. As his words blanked out – the nouns went first – he would wave his hands in frustration, grimace, shrug.

“Ah, yah bugger,” he’d say, sometimes, and at those times he sounded exactly like himself.

After a few years he went completely quiet.

I read Stephens’ book through tears. I wish it had come in time to register with Dad; honestly he probably wouldn’t have been that into it (he liked Lee Child, Wilbur Smith) but I know he would have profoundly appreciated being seen. I know it will help others. 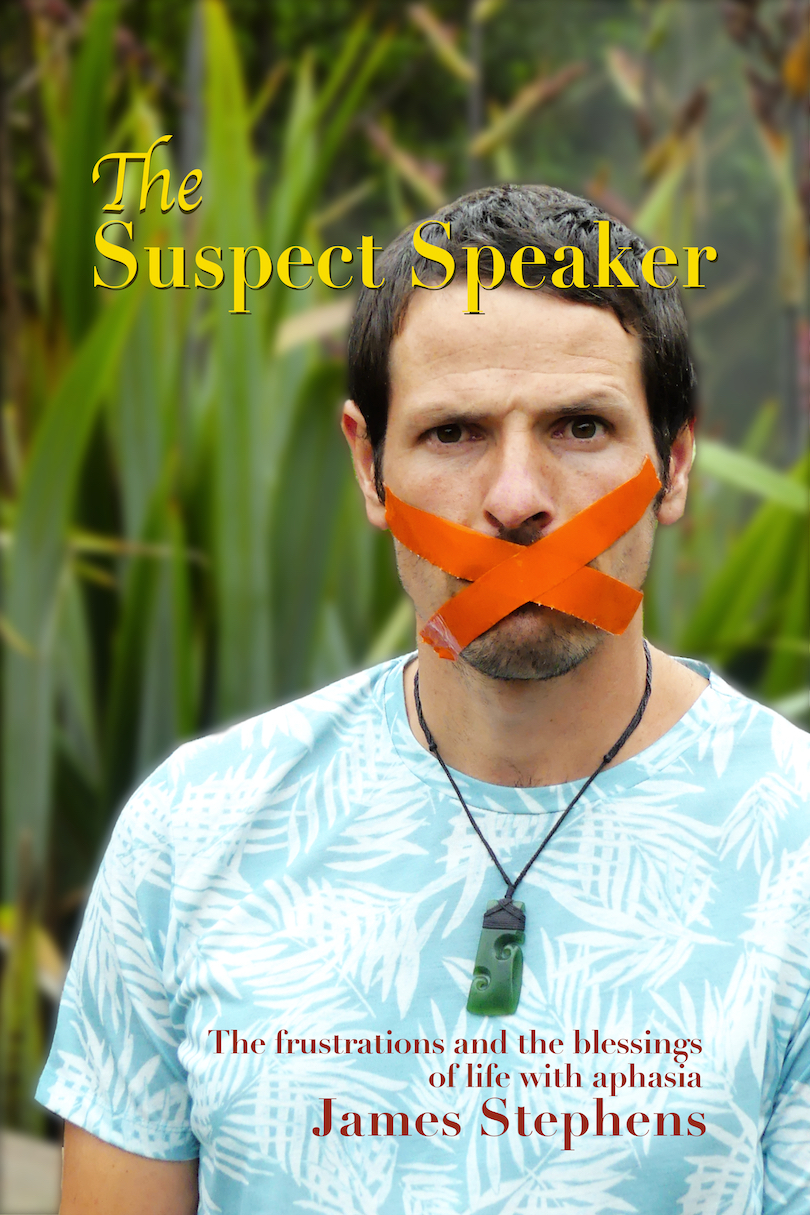 The Suspect Speaker, a book of short stories about aphasia (Image: Supplied)

The Suspect Speaker is a collection of very short stories that, in Stephens’ words, “contain a taste, an inkling, of what it is to have aphasia: the frustrations, the anger, the acceptance and the blessings”.

In these stories, a grandfather sings a wordless lullaby – lalalalala – and finally gets baby to sleep. A woman endures an extremely intense massage because her grunt of pain is taken for assent. A man tries to help a little girl who’s fallen on a beach:

The girl looked at me with fear.
I felt a hand on my jacket. A woman spun me around. “What did you do?” she said.

“You’re drunk! Get away from her!” She glared at me.

Very often, we hear what the protagonist is thinking, and wince at what happens when they try to get it out. It’s a helpful device, but it’s also Stephens’ truth, and the truth for thousands of other New Zealanders hit by strokes or tumours, injuries or primary progressive aphasia.

One story, Distancing, is about a walk during lockdown, and it is an aching thank you to his wife for her patience, her listening. I hope I listened to Dad half as well.

It all feels so familiar. Beaches and parks – spaces outside, which are less cluttered with words and inputs and expectations – feature heavily, just as they have in our last years with Dad. So do children, and with them, moments of transcendence.

“C’mon!” Tim shouted. Some things are easy to say. Because aphasia manifests in all sorts of ways, and because many people do claw back some language over time, Stephens has written three versions of each of his stories. He explains:

“When I was in recovery in the first or second year I could read sparse, short sentences. These are the A versions.

“The beauty of these stories is that can build up. After a person reads the A version, in later years s/he can read the B’version. They know the gist of the story, but they can have a richer experience. And so with the C version later.”

The C versions double as a primer for people trying to get a fix on aphasia; they can also be read to someone with aphasia who understands spoken words but not written.

The fact that this book exists at all tells its own story. It is Stephens’ great gift, his triumph; imagine the sheer force of will it takes to write a book, three times over, when just reading three pages of a novel is exhausting.

I wanted to pepper Stephens with questions. I felt that understanding him could help me better understand my dad – who was, of course, unable to articulate what aphasia felt like. We’ve been emailing for ages now, months, and I’m very grateful to him for putting so much work in. Here’s an abridged version of our back and forth.

The Spinoff: Tell me about your reading and writing life, before the stroke?

James Stephens: I have always read fiction and mostly fantasy or sci-fi.

When I was young, eight years old, I read Jules Verne’s Journey to the Centre of the Earth. It made an impression on me. Next was 20,000 Leagues Under the Sea. I decided to have a library and I invented a pseudo-Dewey system that I added to the books on their spine with a fountain pen. I am not sure my mother was impressed!

I read to my three children at nighttime – each in turn – the fairy tales by the brothers Grimm (the original stories). They were moral tales with deep, profound meaning. Then the Narnia series and the Earthsea trilogy – the same but more obvious.

I still read fiction, but my reading is slower now. I read The Luminaries by Eleanor Catton recently. It took me three and a half months to read it! Mostly, three or four pages at night is enough for me.

I have aphasia … I see the words clearly but when I speak they often come out wrong – especially “non-words” like it, is, if, in. I have dispraxia too … I can’t form the words properly. My mouth and tongue and teeth can’t form the words correctly. It is distressing, because I can’t read very well to my grandchildren now. Giraffes Can’t Dance and The Lion in the Meadow are OK – I have practised them enough. But Grimms’? Narnia? No.

What was it like for you to realise that your reading and writing was badly compromised by the stroke? Can you recall the moment you realised that?

The first year after my stroke I was, as they say, a stunned mullet.

My wife and my family were more concerned with my aphasia than I was. I was thinking: “Ha! I have a stroke! I can’t read or write the way I used to do. Ha! I can’t get my words out so people can understand what I mean. Ah well!”

I think it was so confusing and frustrating for my family and friends, but I was quite unaware. Now, I realise that I was quite impaired, communicatively.

But I knew that I used to be a reader and a writer, and I was determined to have that again, if you know what I mean.

So I created a blog, and wrote down quotes from a book of literary quotes. I expected that one literary quote would be a succinct and worthy entry for my blog. But I had to write each letter down individually! After six weeks, I could recognise most of the words, and after three months I was adding a sentence or two each day. I entered a blog post, every day, for 396 days. By that time, most of the blog was my creation and opinions. My writing takes five times longer than before, and I have to check up, proofread, everything – and I have errors too.

Can you tell me the sorts of books and stories that you read after your stroke? Have you found any other reading resources for people with aphasia?

I didn’t read anything of note for about one and a half years.

The first book I read after my stroke was (I cringe at the thought) the Hunger Games trilogy. Another was the sextet of the Shadowhunters books from Cassandra Clare. Both were fantasy with a bit of action. I tolerated the vomitous teenage angst.

The prose was simple. What I mean by simple is not many convoluted or parenthetical sentences. The level of the words is fine – I understand all the words but when the sentences are sooooo long, I can’t cope. For example, Victor Hugo (Les Miserables) or Thomas Hardy! Aphasia doesn’t reduce intellect, but intellectual stamina!

I read a lot of short stories: Joe Bennett, and the Six Pack volumes one and two – the winning writing from NZ Book Month – and short sci-fi stories (Orson Scott Card).

The worst thing about a novel that is too long is that I can’t recall some things that are germane to the story. Who did what? And where? And who is this person again?

Most of the people that I have been acquainted with that have aphasia don’t read. I think they don’t know what sort of books that would be appropriate.

That is one of the reasons I have published short SHORT stories, with “proper” language but short sentences and big gaps in prose.

Can you tell me how long it took you to write the book, and what reaction it has received from others with aphasia?

I toyed with the idea for three months but when I was really writing, it took about seven months, over all.

I don’t know who is reading the book, so I can’t answer about people with aphasia. The only “reviews” I have got is some of my friends, my speech therapist and the Aphasia NZ management.

Two friends said the stories made them cry.

Another one was amazed about the reaction of some of the characters – the ones who thought the person with aphasia was drunk. It happens.

And they were “impressed” (not the right word!) about how aphasia affects a person – every conversation, every day.

My speech therapist said: “Have been revelling in soaking up the words. Super inspirational, I’ve been sharing it with my colleagues and the Rotorua aphasia group.”

AphasiaNZ said: “James Stephens, a long-time friend and supporter of AphasiaNZ, has written a clever and innovative account of how aphasia impacts upon the everyday lives of all those affected by it. His stories are both moving and funny. They are also encouraging and uplifting. AphasiaNZ highly recommends James’s book to anyone with experience of aphasia. We also believe that those with no knowledge of what aphasia is or the profound difficulties it can cause will come away with greatly enhanced understanding and empathy.”

I guess they liked it!

The Suspect Speaker: The Frustrations and the Blessings of Life With Aphasia, by James Stephens, is available for approximately $8.99 as an ebook, or $10.99 as a paperback via Amazon.

*James Stephens is a pseudonym, and a serendipitous one: my dad’s name is Stephen James.