Owen Eastwood is a Māori mental performance coach who has worked with some of the top teams in the world. Jamie Wall reviews his new book, Belonging, which is based on the values of whakapapa.

If there’s a book that rugby administrators in this country should probably take a look at, it’s this one. On the surface Belonging is a kind of self-help book for teams – aiming to help them connect and find a shared purpose. It preaches the value of Māori culture, specifically the concept of whakapapa, in creating identity, worth and success in both the sporting and business worlds.

But once you get into Belonging, it’s clear that it contains more than just road maps for winning trophies or creating harmonious dressing rooms. It digs into personal growth, evolution and anthropology, as well as the journeys undertaken hundreds of years ago to reach Aotearoa and what they can teach us.

Eastwood (Ngāi Tahu) was raised in Southland and is now based in the UK. He has a pretty formidable CV, working with the British Olympic team and England football side, the South African cricket team, the Royal Ballet School, Manchester United, Harlequins RFC, and the New Zealand Warriors, among others. However, he is not from a professional sporting background – as a lawyer, he worked with Nato’s Central Command. I was left thinking Eastwood has really flown under the radar in terms of recognition in this part of the world. Perhaps that’s because he seems to have fallen into his work entirely by chance.

Maybe that public perception will change with the release of Belonging. It is a collection of stories from his experiences working with teams and individuals, bouncing from one sport to the next, always coming back to how the lessons of the past can be applied to modern team dynamics. A massive theme is that of storytelling, which started as literally sitting around a campfire and creating a mythos of identity. Eastwood frequently shifts from talking about a rugby or football game to taking a deep psychologically abstract dive, some of which admittedly takes a bit to get your head around:

We then look to the centre of the circle. Three stones lie there. Each stone represents a core value of this tribe. The leader picks up in turn and gives it meaning through Us stories from the past, present and future. The leader hands each stone to a team member. They feel it and hold it. They commune with it. They explain what the value means to them. Then they pass it to the person next to them. In this way, each stone, each value, comes to life.

Belonging is full of names and places familiar to sports fans. The explanations of whakapapa and culture are frequent and written for an overseas audience, which makes for an awful lot of repetition about something a lot of New Zealanders already know. But while this does sometimes come off as a bit clunky, it’s not just about our culture, but also how teams he has worked with have embraced their own, and the enduring similarities they share. The similarities between different indigenous cultures are examined, especially the South African concept of ubuntu, closely linked to what we know as mana. Each chapter is brief and to the point, drawing a lot on Eastwood’s own life and experience growing up in a bicultural environment. The storytelling element itself is a part of the shared experience he is trying to get across.

There’s plenty to be said about authenticity, loyalty, hierarchies and the dreaded “alpha” personalities. Perhaps Eastwood’s most high profile assignment was with Gareth Southgate’s England side that made a run to the 2018 World Cup semi-finals. The generational differences between Southgate’s time as a player in the 1990s and the world views of the team he is now in charge of are not shunned, but celebrated by the now highly popular manager. He pulls off a dramatic rebranding of his own image in the process.

The key point in Belonging is about knowing where you are from, but interestingly enough the most engaging stories aren’t about New Zealand at all, but South Africa. Sport played a part in the effort to legitimise apartheid, one that the All Blacks shamefully put their hands up for on numerous occasions. The South African cricket side, although tremendously talented, faced a massive identity crisis after being reintroduced to the world after the apartheid regime ended in 1991. Indeed the entire concept of being South African changed, as is stated in the book:

There was no unifying covenant to bind behaviour. There was a lack of team identity. At the time, what we could become was undefined, unknown and untapped. 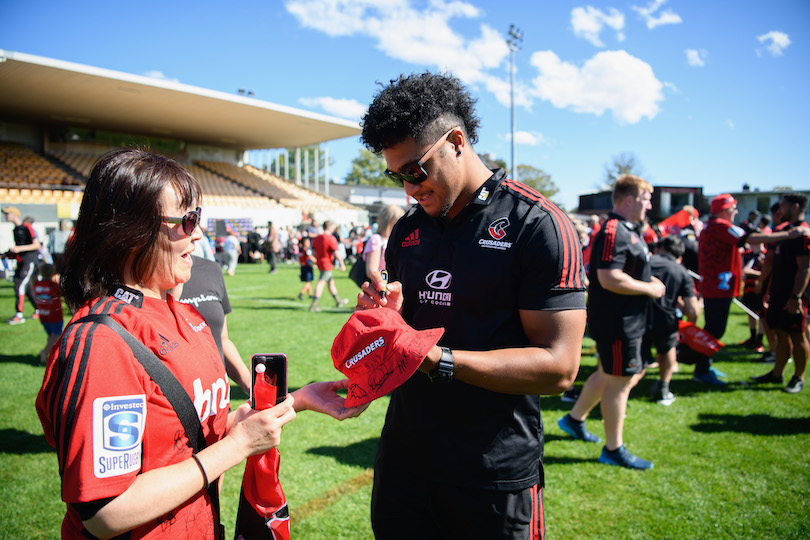 Leicester Fainga’anuku at a Crusaders open day in February. The team recently changed its logo but not its name, despite public pressure (Photo by Kai Schwoerer/Getty Images)

In an issue that’s sadly still relevant to New Zealanders in 2021, the team’s name was changed: the Springboks became the Proteas, due to the negative connotations of the former. This was another hurdle to overcome. Eastwood’s explanation of how the team came together and embraced the new identity is a fascinating one, as is the story of former Springbok captain Bob Skinstad’s family history in the country, and the resistance he faced from his team mates – the majority of whom were Afrikaners.

Another great tale is the reshaping of the identity of the Clermont Auvergne rugby club in France, coached by New Zealander Vern Cotter. Clermont is the home of legendary Gallic chieftain Vercingetorix, who famously threw down his sword and shield at the feet of Julius Caesar. Despite Vercingetorix’s heroics, his legacy meant that the region was known as the symbolic home of gallant losers. Centuries later, that story permeated into Clermont losing three French Top 14 finals in a row. The book explains how Cotter made a simple but brilliant switch in the narrative to change their fortunes.

While it’s impossible not to be moved by those examples, they do stand in stark contrast with Eastwood’s work with City Football Group, a gigantic Abu Dhabi conglomerate that owns Premier League champions Manchester City as well as New York City FC and Melbourne City FC. Man City were of course one of the primary drivers of the doomed European Super League idea recently, and have a reputation for being a “plastic” club – one whose success has been built on heavy injections of cash and an artificially-created fanbase.

Further, it gets a little bit tricky when Belonging conflates indigenous culture being used to bring together the Seattle Seahawks:

The noa takes the form of fast sharp practices amidst loud music, the incorporation of play and competing into team spaces and plenty of banter. The tapu includes a “no whining” rule, and no swearing or yelling is permitted either. Pete Carroll likens this rich environment to a class in school where a teacher is emanating positivity, laughter and music and you want to be a part of it.

Here’s the problem: the Seahawks have appropriated Native American culture in their branding since the team’s inception – and Eastwood’s veneration of Super Bowl-winning coach Carroll should really be accompanied by his less-than-stellar back story. Carroll is undeniably a great leader, but he only ended up at the Seahawks after leaving a lucrative position at the University of Southern California in disgrace, in 2010. He’d become embroiled in an NCAA violation scandal in which his already unpaid players were heavily sanctioned. In the aftermath, the 2004 USC team was forced to vacate its National Championship and star Reggie Bush had to give back his Heisman Trophy for player of the year.

But while this does take a bit of the gloss off the genuine stories of teams coming together, there is a real lesson here about how sporting bodies can reconnect with their fans. Right now, the biggest story in rugby in New Zealand has nothing to do with what’s happening on the field. Rather, it’s: Who is going to control the game financially going forward? So far it’s safe to say no one is coming out of it looking good. Add to that the generational disconnect that ordinary fans feel, which is obvious when confronted with rows and rows of empty seats at games around the country. To take Eastwood’s own advice, rugby almost needs a new “Us story”:

I regard this work as a sacred task. It involves immersing yourself in the three dimensions of an Us story: the past, the present and the future.

I reconnect to the past. This requires fully immersing myself in the heritage of a team and the tribe they represent. It is typical for me to spend months researching this and most impactfully meeting “ancestors” to hear the Us story through them. With Scotland [rugby team], this involved speaking to wise elders such as [coaches] Ian McGeechan, Andy Irvine and Jim Telfer. I construct a whakapapa of the team – including key ancestors, moments and legends. Alongside this I look at the wider story of the tribe the team represents – in this case the Scottish nation. This involves understanding the arc of the Us story.

I then connect to the future. What is the team’s vision for the next chapter of the Us story? This informs us what we are working towards and what the environment needs to enable and drive.

Finally, we focus on the present. Do we have a sense of identity that flows into everything we do? Do we see ourselves as part of an unbroken chain from our ancestors to those that follow us? More often than not, this needs mending.

As far as waning interest in rugby is concerned, this is absolutely bang on. Tell the story, fill those seats, make new fans for life and the wounds will start to heal – so the idea of whakapapa and belonging is something that is worth much more than money for an organisation like NZ Rugby.

It’s a situation that could use a bit of a reset, and Eastwood’s book and the lessons inside are definitely a good place to start.

Belonging: The Ancient Code of Togetherness, by Owen Eastwood (Hachette, $37.99) is available from Unity Books Auckland and Wellington.