One Greenland shark is more than five centuries old. Michelle Langstone thinks about it a lot.

I keep thinking about this shark that scientists think is 512 years old. The article I read didn’t say how they got that exact date, but they can tell the approximate age because sharks of this species only grow one centimetre a year, and this shark is five and a half metres long. This Greenland shark is out there, cruising the seas off the Canadian arctic, far north of where we live. I watch the news and the world still feels like it’s ending. The pandemic moves across continents leaving death in its wake; it moves like the shark, silent and lethal. In Japan they appoint a Minister for Loneliness, because mental health is declining and suicide rates are increasing. I wonder if there is a Minister for Loneliness in the ocean.

I go out to walk in the mountains near where I stay. I can’t get home because the country is in lockdown again, and going home means I might not be able to come back to my job. I walk up a track that miners used to walk in the gold rush, well over a hundred years ago. I place my feet in the dirt ruts I imagine they walked in, to feel their phantom footfalls. A grasshopper hitches a ride on my boot for a kilometre, and for a while, it is the only living creature that I see. I have an uneasy relationship to loneliness. In crowds I wish for the absence of people. In their absence I want the noise of their industry. Now that I cannot go home, I dream of my house in my sleep. I dream about the neighbour who mows his lawn every four days and wonder if he has his navy blue shorts on, the ones with the iridescent stripe down the sides. 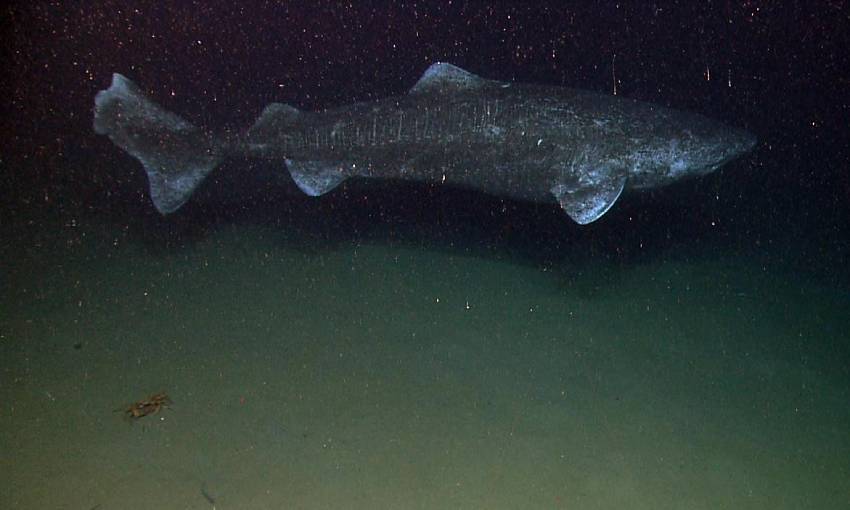 To make do in this brief hiatus from home I spend time trying to access the mind of  the Greenland shark. This shark is oblivious to Covid-19. It may even be oblivious to time passing. In the photographs it looks like it is made of stone, hacked out of a cliff face, it is so rugged and torn. By now the shark is blind, because parasites have latched onto its corneas, gradually obliterating its vision. It uses its sonar to move, and feasts on freezing cold fish. Other sharks of a relative age have been found with reindeer antlers in their stomachs. I see it cruising close to shore, waiting for unlucky mammals to fall in. I see deer drown and their bodies drift, and the shark eating the carcass in deeper waters, not attacking anyone at all. After 500 years you could elect to be a pacifist and nobody would notice. I wonder what the last thing it ever saw was, before blindness, and if it carries those memories behind its eyes, printed there the way a sun strike floods your closed lids with pulsing light and the outlines of what you were looking at before the brightness got in there.

The shark was alive when Leonardo da Vinci was painting. The painter put down his brushes and died and the shark kept moving on through dark blue water, in the colder parts of the sea. On land Henry VIII separated from his first wife, and embarked on the next marriage, and all the while the shark moved its grey body in clean lines through months and years. I wonder if the shark ever sought out a therapist for its loneliness. The remora fish who clean the shark’s body and hitch a ride through centuries might listen to its problems while they chew off the debris on its skin. I tell the grasshopper on my boot how I miss arguing with my husband, and that I miss the way the streetlight outside our bedroom flickers off an on at 2am. I don’t even know if sharks get lonely.

I wake in the night at the exact moment an earthquake strikes off the east coast of my home, though I have not felt it. The pull of the ocean becomes something to fear, and the shark is out there somewhere, far away from these tremors and those siren calls, and the people running for high ground. We wait, and watch the ocean for its temper. We wait on a wet day for the ocean to decide and all I can think about is that shark. A calendar with fins, five centuries old and witness to the birth of the modern age; the kind of acceptance that must come across you to have lived so long, and to have seen so much, to have felt the temperature and the water rise.

I watch a video that scientists in Newfoundland have taken of the shark. They are shining a light in murky water full of silt and debris. The shark undulates its long body, its eye a dull and veiled grey, like an old person with glaucoma. I watch it with the sound off, watch this grey ghost confused by what it senses but cannot see in the water. There are creatures clinging to its eyes. It has been bothered, appears confused, or interrupted. It swims from the light, the triangle of its tail the last to leave.

Michelle Langstone’s collection of personal essays Times Like These: On grief, hope & remarkable love is published in May and available for pre-order at Unity Books.