Touch of the ol’ existential dread? Wellington writer Tabatha Wood explains how reading horror might just take the edge off.

I don’t really like books with happy endings. I never have, they don’t feel real to me. When I’m anxious, I can feel it sitting like a rock, deep in the pit of my stomach. The only way I’ve ever managed to displace that, from as far back as my teens, is by launching myself into horror books. Forget happy stories filled with warm fuzzies. For me, self-care is unknown monsters lurking under the bed.

Last lockdown caught me in the middle of editing a canine-themed horror collection, Black Dogs, Black Tales, a charity anthology in support of the Mental Health Foundation of New Zealand. I spent my days working from home, finding an unusual sense of peace in tales of ghosts and grief. It came as a welcome distraction from the real horror – a deadly virus loose in the community.

Good horror will leave you with a feeling of unease. An itch in the brain that you can’t quite scratch, but equally you can’t ignore. It should squirm around in your head and leave you still thinking about what you’ve read for days, maybe weeks, after finishing.

Horror asks: “What would you do if … ?” And: “How would you behave if there were no consequences? Are you still a good person when no one is watching? Would you kill someone if you could, or if you had to?”

Horror, by its very nature, is confronting while showing us where the boundaries are. A lot of people hear the word “horror” and assume blood, guts and gore, but horror fiction does not have to be gruesome to be effective. It can be the most unsettling when it imagines danger in “safe” places. Consider multiple award-winner Elizabeth Knox’s Wake, which she describes as “sun-saturated Kiwi horror,” in which an invisible monster descends on sleepy Kahukura. Or Octavia Cade’s heart-rending short story The Feather Wall, which sees the protagonist holed up on Resolution Island, trying to survive an apocalypse. Horror is not limited to tales of scary monsters or evil people, it can also be loneliness, loss, depression and grief – the horrors of humanity, if you will.

And while some people want to shut out all the terrible things in the world, others, like me, see it as cathartic.

Here’s award-winning horror writer Casey Lucas: “Given the state of the world, there’s an allure to reading and watching stories that transform our fears into monsters we can slay. Some people are drawn to revelling in those horrifying emotions in a safe environment, as a sort of release valve.”

Anna Kirtlan, who has just published Ghost Bus, a collection of short horror stories set in Wellington, agrees. “The world is going through some of the biggest upheavals in generations and people have always used writing to make sense of things. I think perhaps people are noticing horror a bit more as they look for answers and distractions.” 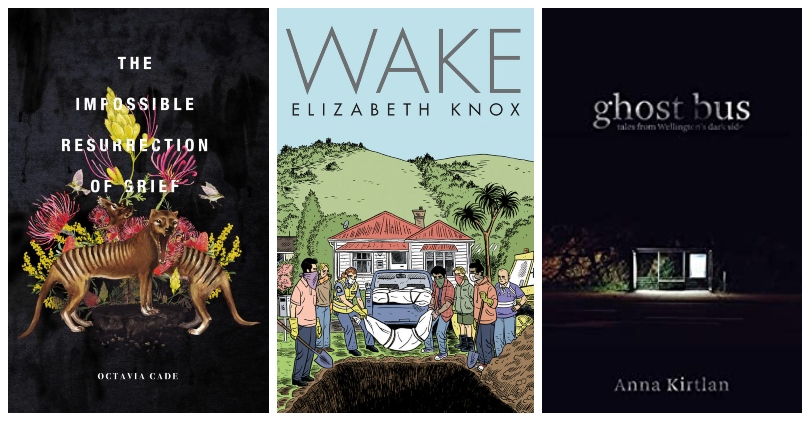 And you don’t need to look internationally to venture into horror fiction. There is a wealth of homegrown talent right here writing dark and disturbing stories – and many of these writers are women.

New Zealand horror offers a unique perspective that can’t be seen anywhere else in the world. Our landscape, culture and history are a vibrant wealth of inspiration for stories that speak to the soul.

“New Zealand is a small nation at the bottom of the world,” Lucas says, “yet both of its primary cultural groups were initially seafaring cultures with explorer spirits. There’s rich territory to mine there in horror. Māori and Pākehā both have that tradition of journeying far from home toward a new destination, and the further one journeys from one’s safety net, the more ripe the opportunity for horror.”

Our geographical isolation and low population density brings with it a heightened sense of remoteness, a keen awareness that yes, we are a team of only five million people on a small island at the bottom of the world. Unlike Australia or America, we don’t need to worry so much about dangerous creatures lurking in the bush. For the inexperienced tramper, extreme weather conditions or getting hopelessly lost are the biggest threats. Yet it is this specific geography that makes our horror distinctive and different, tempered by our unique New Zealand voice.

Octavia Cade, a botanist and science communicator by training and multi award-winning writer of ecological horror says, “Living in New Zealand, we have an experience of distance, of isolation, that’s very much embedded in our national psyche.

“Ecological horror is a way to make landscape and ecology seem mythic, threatening and other,” she explains, “while still being very much embedded in a realistic appreciation of our present and our possible future.”

Cade’s most recent antipodean horror novella, The Impossible Resurrection of Grief, explores how the collapse of ecosystems and numerous species falling into extinction heralds the arrival of Grief, an unstoppable melancholia that drives people to suicide. It speaks of creatures endemic to the southern hemisphere and the unbearable feelings of guilt, and complicity, brought on by their loss.

Isolated geographically and socially, our smaller community also means we are more likely to help each other out, and be more eager to speak out about things that affect us. We can’t get lost in a crowd so easily, but similarly, our two degrees of separation often means our private business is not always exactly that.

“New Zealand horror often includes its setting, the town or geographical feature it is written about, almost as a character in its own right,” Kirtlan tells me. “We have a love/hate relationship with the place we call home, which adds to our own unique flavour.” In Kirtlan’s humorous horror collection, the capital city is rewritten as a hub of supernatural activity. The statue of Katherine Mansfield takes vengeance on disrespectful seagulls and yes, there are ghost buses – and they’re chillingly real.

Location is extremely important in Kiwi horror. Take for example, Cassie Hart’s freshly-released Butcherbird, a chilling story of dark family secrets that is all the more enriched by its rural Aotearoa setting: “It was still there. The same two-storey farmhouse with the mountain looming behind it like a watchful guardian, the ranges reaching around so that the farm seemed almost nestled in their embrace.” See also Lee Murray’s Taine McKenna series, a ferocious collection of military horror that features Te Urewera National Park. Of course, our isolation brings with it insulation too; we may be more sheltered here from Covid-19, or the climate crisis, compared to the rest of the world. We have been watching from a place of relative safety while other countries struggle to regain control. It adds to a curious feeling of disconnection that can be both a blessing and a curse. A sense of feeling somehow adrift from reality. A tiny fish swimming in a vast ocean.

There is a lot of physicality to New Zealand horror fiction, and its writers are particularly talented at putting new twists on old tropes. While outside of our borders we seem to be better known for our horror comedies, thanks to What We Do in the Shadows, Wellington Paranormal, and of course Peter Jackson’s Braindead, much of our horror literature is not only serious, but incredibly intelligent and deeply nuanced.

“Good horror always responds and speaks to the political and socioeconomic climate in which it’s written,” Melanie Harding-Shaw tells me, “and New Zealand writers do not shy away from exploring human horrors – subjects such as racism, colonialism, gender discrimination and mental illness.” Harding-Shaw was a Sir Julius Vogel finalist for a psychological horror story that told a visceral, striking tale of a writer overcome by the latter.

Genre-blending is a common theme in homegrown horror too. There are more hybrid genres and crossovers, such as sci-fi horror, ecological horror and our own brand of dark and twisted horror comedy. Horror appears in places we would not necessarily expect, or in books we wouldn’t even call horror.

“I think our horror is less traditional and not always pinned to a specific genre,” Kirtlan says. “Many of the most horrific passages I have read, ones that stick in my mind the most, are from writers who would not necessarily label themselves horror writers. Kiwi writers are very good at seeing the horror in the everyday. We still have ghosts and vampires and our folk with murderous intent, but we like to take them to places they wouldn’t always be found.”

Elizabeth Knox’s Absolute Book, for example, is labelled as fantasy, not horror, but many of the themes she explores have a dark quality to them; from lost love, grief, and dead siblings to talking birds and terrible faeries. Twisting the threads of horror and fantasy is something Knox is particularly adept at.

And it’s not just Knox who has a knack for the macabre. A new wave of women writers are tapping into the horror vein. Why?

“I write horror to explore things that disturb me,” Harding-Shaw says. “Either within myself or within society. I can bleed my feelings onto the page in a uniquely visceral way and play on that to induce a gut punch of understanding in the reader.”

“I’ve been reading, absorbing, and thinking about horror for as long as I can remember,” Lucas says. “Horror comes naturally to me, because life is horrifying. The type of horror I write, no matter how far-fetched, is a reflection of the material conditions in which people live. It’s a way to confront the worst parts of the self, as well – our failures and our fear of failing, and our remorse for the worst things we’ve done.”

“The thing about horror,” Cade says, “good horror, anyway, is that seeded throughout is hope.”

Dark Winds Over Wellington: Chilling Tales of the Weird & the Strange, by Tabatha Wood (Wild Wood Books, $5.99) is available as an ebook via Amazon or Smashwords.

Most of the books mentioned in this piece can be ordered now through Unity Books Auckland and Wellington, but will only be delivered once we’re out of Level 4. If you’re desperate for a fix you can buy them as ebooks, or check whether the ebooks are available via the Libby app, free, at your local library.