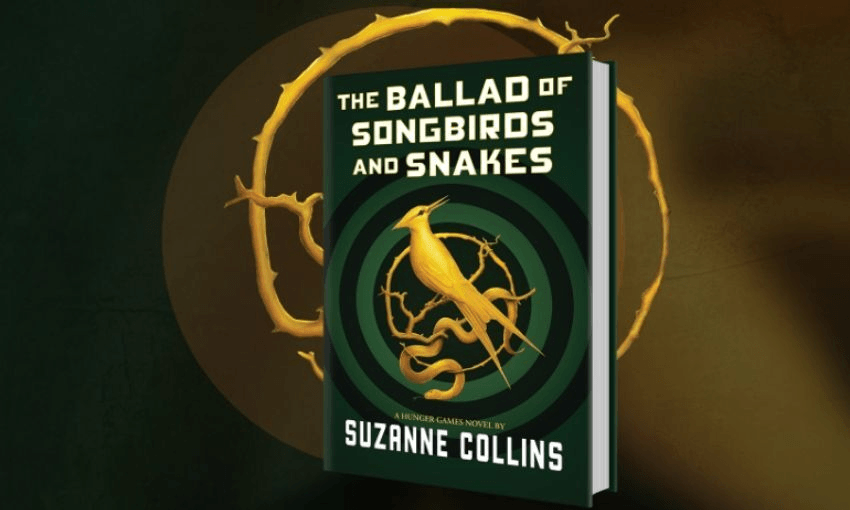 The prequel to The Hunger Games trilogy is a fascinating case study of narcissism and it has a right-now relevance (Photo: Supplied)

The Unity Books children’s bestsellers for the month of May

The prequel to The Hunger Games trilogy is a fascinating case study of narcissism and it has a right-now relevance (Photo: Supplied)

An unusually long board book. What this means is it’ll take your toddler an entire five minutes to clumsily turn each page, and what this means is that you get to actually drink your coffee.

The big winner at the 2019 New Zealand Book Awards for Children and Young People. This year’s finalists will be announced in a few days.

“Smart is not just ticks and crosses, smart is building boats from boxes.

The prequel to The Hunger Games trilogy tells the story of how a Capitol boy called Coriolanus Snow grew up to be Panem’s diabolical President. I was all kinds of amped about it, and as this is in the charts despite only releasing a week ago, clearly so were heaps of you.

Verdict: it is a joy to hang out in Panem again. This is a fascinating case study of narcissism and it has a right-now relevance. There are lots of deft Socratic scenes that I would like to shove in front of everyone who thinks the series is a shallow “teen” read (it reminded me of young adult fiction by Bernard Beckett). Some readers will recognise the subtly drawn creeper behaviour by teenaged Snow, too – at one point he sneaks up on his girlfriend when she’s alone in a field, for example, despite knowing she’s just been profoundly traumatised. Absolutely you can draw a line from this toxic, self-obsessed asshole, himself damaged by war as a child, to the tyrant he becomes.

But by about page 600 I was wearying of the way those lines were being drawn for us, and then highlighted and bolded and tapped with a pointer. You read prequels excited for a bit of exposition, but in this case every single stitch of the series was unpicked and sewn up again in full view. The snakes, the mockingjays, music, roses, Tigris, Snow’s sweet smell, his obsession with poison and games and opulence and with a certain girl tribute from District 12: we cover it all, exhaustively, and I do miss some of those being mysteries.

There are some pretty stretchy coincidences, too. Like the fact that Snow, a boy from the Capitol, somehow winds up spending time in the remote, broken-down house by the lake that will some 60 years later be Katniss’s sanctuary – and someone pulls up a katniss plant (it’s a type of reed that grows tubers) and they have this whole ironic conversation about it.

As a teenager I’d have loved that stuff – and of course these books are ostensibly aimed at teens – but for an adult it does take the gloss off.

“All Fly has ever known is life as a ‘gutterling’, living by her wits, sneaking scraps, always under the wrathful watch of her keeper, Black Bill. One day, as she hides from him, Fly finds herself in a tiger’s cage about to become his next meal, but as the tiger licks her bloody elbow, he stops and instead announces ‘You have blue blood – royal blood – in your veins’, then bows and calls her ‘Your Majesty’.” – Readings

Ashley Bloomfield’s got to be next. Or Siouxsie Wiles. Or Toby Morris!

Once again proving that Gecko knows what it’s up to, this is an adventure story about four kids who have to draw their own map across a wilderness. Prickle bushes, ruffians, dragons, nut-cracking, et cetera.

9  Wayside School Beneath the Cloud of Doom by Louis Sachar (Bloomsbury, $17, 8+)

“This absurd and absurdist series, about a 30-story elementary school with one classroom on each floor, has seen a new addition only once every decade or two since its inception in 1978, but it has still generated enough fan-feeding mythology to fill its own wiki.” – the New York Times

10 The Beast of Buckingham Palace by David Walliams (HarperCollins, $25, 7+)

I’m grateful to Walliams for the audiobooks he released free each day on his Elevenses page through lockdown, but honestly I never want to hear or read another of his books again.

3  The Book of Dust: The Secret Commonwealth by Philip Pullman (David Fickling Books, $35, 15+)

Susan Wardell reviewed this for us. “A savvy, multi-layered fantasy and perhaps most importantly Pullman’s characters remain complex and likeable, even when his ontology is looking a little glass-eyed,” she wrote.

You can try to be all cool and scornful about the Kuwi books but you know and I know that she’s sweet as hell and the books are clever and layered and very beautiful.

Black-and-white board book for the wee tiny pēpi. Better than most.

Slim, agile, intelligent. Also: Wanaka! “I don’t write for children. Kate de Goldi made me do it,” Wilkins told us.

Fifth in the extremely popular Miss Peregrine series. It’s the kind of bestseller where the author gets interviewed by Entertainment Weekly ahead of release:

“The peculiars are in serious trouble,” Riggs “revealed” last year. “War is brewing between fractious clans of Americans. Evil that Jacob and his friends thought they buried hasn’t been buried quite as deeply as they’d hoped. Jacob’s skills as a hollowgast hunter are put to the test like never before. There are some joyous reunions and homecomings. And a dark prophecy involving the newest peculiar of them all, Noor Pradesh, threatens to turn the whole peculiar world upside-down.”