Unacceptable traces of glyphosate in New Zealand’s honey has sparked a national discussion on the use of the chemical. But as Nick Stringer writes, a cost-effective alternative is hard to come by.

In January of this year, Japan threatened to stop importing New Zealand honey after finding excessive levels of glyphosate for the second time. If there was a third strike, Japanese importers said, New Zealand would be excluded from a market that provided $68 million of our total $498 million in honey exports for 2020.

In response to Japan’s threats, MPI has mandated glyphosate testing for honey exporters, imposing an extra cost for beekeepers and producers who are generally not the ones spraying the controversial herbicide. But according to Karin Kos of Apiculture New Zealand, it’s a necessary development to match consumer demands.

“There has obviously been a lot more global awareness about glyphosate use and pesticide residues… People are looking at these things all over the world, and as a country, as an industry, we have to be prepared to respond,” says Kos.

The growing pressure around the world is forcing producers and regulators to mitigate their use of glyphosate – even powerhouses like the European Union are discussing removing approvals for the chemical by 2022.

But New Zealand’s primary producers who use glyphosate as an integral tool for production argue they will need both time and techniques to transition away from this very efficient and cheap chemical.

The history of glyphosate

But how bad is glyphosate on New Zealand farms and orchards?

First, it’s probably worth understanding what this controversial chemical actually is. Glyphosate – most commonly marketed as Round Up – is a herbicide sprayed onto the green foliage of plants, and absorbed within that plant to cause its death in about two weeks. Essentially, it kills the weeds that compete with the chosen crop for nutrients and water.

Glyphosate today is still the preferred product within many agricultural sectors. It is cheap, easy to apply, and comparatively non-toxic compared to many alternatives. It first appeared on the market in the 1970s. Agriculture across the world was modernising rapidly as a result of technological advances combined with post-war population growth. Things were booming and glyphosate was a major tool, along with cheap fossil fuels, more advanced machinery, and synthetic fertilisers. Glyphosate enabled food production on a scale previously unimaginable. 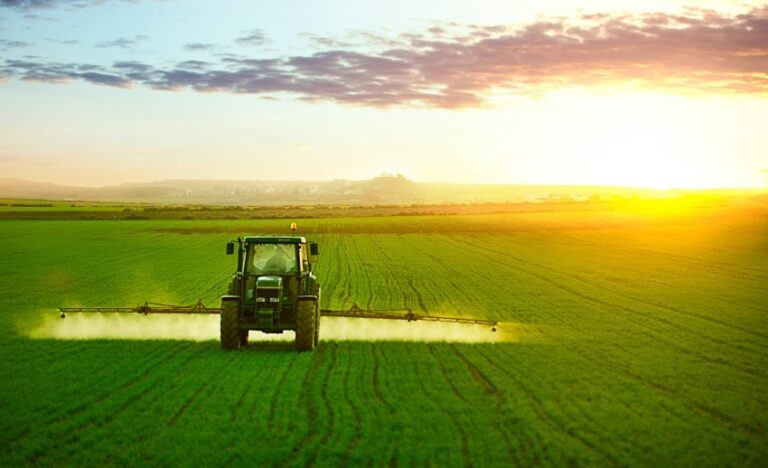 Many crops are mass-sprayed with herbicide and pesticide (Photo: Getty Images)

In the 1990s, crops such as soybeans and corn were genetically modified to resist glyphosate. Fields of these crops could be exposed to more glyphosate with less targeted application, and every plant would be killed except the corn or soybeans.

However, this period also saw a surge in health complaints around the world. To date there have been about 125,000 legal cases between complainants and glyphosate manufacturers, most of which have just reached settlement last year. German multinational Bayer, which now produces glyphosate after buying US giant Monsanto, agreed to pay US$10.9 billion to settle approximately 100,000 law cases alleging carcinogenic harm from glyphosate use. While this has had little or no effect on the global sales of glyphosate, it has invariably influenced consumer perception.

More light was cast on the chemical in 2015, when the International Agency for Research on Cancer deemed it a “probable carcinogen”. While the IARC’s statement was subsequently disputed by parts of the scientific community, which argued there was limited evidence to support the claim that glyphosate would cause cancer in humans, some New Zealand scientists maintained that a lack of evidence did not mean the herbicide was harmless, and that it warranted further scrutiny by the EPA.

While the scientific community may be divided on the harm of glyphosate, there is another significant issue which is prompting the growers themselves to ask questions about the risks of using one product so intensively – crop resilience.

“With all chemicals, same as medicines like antibiotics, there is a resistance that builds up when it is being used continuously,” says Colin Hurst of Federated Farmers. “So it’s just starting to develop in New Zealand where we become resistant to glyphosate. That comes about because of the continual use of just one product.”

“Farmers think they have this amazing chemical in glyphosate, but it comes with unforeseen consequences and one of those is resistance.”

In the age before glyphosate, cultivation was the method to kill unwanted plants and sow crops. Burning and hand-weeding were the back-up methods for large and small scale situations. But excessive cultivation degrades soil structure, and exposes the soil to erosion from strong winds and rain. This is exactly why many farmers prefer to use glyphosate as it allows for less cultivation.

“I do know that people can mow. Or you can grow certain crops that grow up and smother the weeds, then crimp them with a special roller that flattens the crop…That is the alternative that organics people use.”

New methods are developing within certain sectors of agriculture, such as mulches, weed-mats, underground irrigation and even shallow-rooted native plants that provide ground cover without competing with deeper rooted crop plants.

As highlighted by Ed Massey of Sustainable Wine Growers New Zealand, these alternatives are all just “different methods are trying to provide nutrition to the [crop] without providing nutrition or sunlight to the weeds.”

For Massey, this ingenuity in weed control is key not just to Aotearoa’s agricultural brand-image, but sustainability in general. “We’ve got to really focus on the alternatives that can promote yield whilst ensuring the herbicide use is kept to a minimum. That’s essentially the guts of our goals in the pest and disease space. We want to be the world leader in sustainable alternatives.” Organic vegetables are grown without the use of herbicide (Photo: Getty Images)

Nick Mills of Rippon Vineyard and Winery has been growing grapes organically without glyphosate for nearly three decades. He offers simple advice for anyone wanting to transition towards these sustainable alternatives:

“Make compost. Understand life. Get your hands in it. Feel its warmth. Start inoculating your land with life every year, and you immediately say ‘why would you do that then go and kill it?’ You just wouldn’t do it. It’s inefficient and doesn’t make sense.”

Soil health, and consequently, the health and nutritional content of the crops growing out of it, is another reason why heavy glyphosate use is being questioned. Research has shown that long-term glyphosate use can kill certain biology within the soil, disrupting the “soil food web” and turning living soil into barren unproductive dirt.

Elaine Ingham, a world-leading microbiologist who has devoted her life to studying the biology of soil and the complex life cycles that occur unseen beneath the soil (the soil food web), has discovered this very phenomenon through her research.

“Glyphosate is an herbicide, it kills plants. Does it kill just weeds? No, it kills lots of other things. And so when you add that glyphosate into the soil, you are killing some of the very microorganisms that will protect your plant against diseases and pests,” says Ingham.

While this body of research is relatively recent, it suggests that within healthy soil there’s a thriving food web of bacteria, fungi, protozoa, nematodes, microarthropods and more. It’s this food chain within the soil that converts nutrients in that soil into plant-available forms, feeding plants and therefore feeding all life above the soil.

These hidden processes are what have made the high-yield benefits of glyphosate such a mixed blessing. Although it has enabled very efficient food-producing systems, Ingham says “it’s turning soil back into dirt. And you can’t grow good crops.”

As for New Zealand’s honey, the latest developments show that glyphosate doesn’t simply affect the crop and soil in its growth phase, but also the viability of the end product. Perhaps most alarmingly, the fact that experts don’t fully know how the chemical got into the honey in the first place highlights that gap in knowledge about how it spreads. After all, mānuka trees are not sprayed with glyphosate, so where are the bees picking it up?

“We’re uncertain how the glyphosate got into that honey,” says Federated Farmers’ Hurst. “Whether they picked it up flying around, or if they have visited flowering plants that just had glyphosate on them.”

Despite all the controversy, New Zealand’s Environmental Protection Authority, the organisation responsible for regulating such chemicals, has historically stood by its own research that glyphosate is safe. “Our position on glyphosate has not changed: we consider it safe to use, provided the specified controls and precautions are followed,” says Dr Chris Hill of the EPA.

But on the 28th of April it issued a call for information.

“We want to understand whether products containing glyphosate may be damaging the environment or human health, despite the clear rules in place. We also want to know about the economic benefits of glyphosate’s use, and any potential alternatives. The information gathered will be used to help inform our next steps,” the EPA said.

This assessment by the EPA will take place over the next couple of years, following the conclusions of the European Food Safety Authority and European Chemical Agency, due mid-2022.

But what effect would a regulatory ban on glyphosate have for New Zealand agriculture? “It would affect our cost of production, no doubt about it,” says Hurst.

Conversely, Sustainable Wine Growers’ Ed Massey says a reduction in glyphosate could have enormous economic benefits for New Zealand’s organics market, which was already worth $600m in 2018. Changing consumer perception is bound to boost it further, he says.

“The new generation of wine consumers wants to know more about how the product is produced, and where it’s made, and what are the processes that go into that product… it’s that combination between premium quality and organic production that is driving consumer interest overseas, and long may that continue.”

For Nick Mills of Rippon Vineyard and Winery, the true value of any agricultural product is up to the consumer.

“We’ve all got to change our habits, and it’s got to be consumer led. Your decision to purchase wine or food has an impact, somewhere, on a piece of land.

“No farmer is going to stop using glyphosate or anything else for that matter, unless it makes economic sense. They’ve got to feed their children too.”