Ten years after it first opened for the 2011 Rugby World Cup, Wynyard Quarter is being celebrated as a world-class model of waterfront redevelopment. Michael Andrew asks what makes it so unique.

‘Wonderful!” “Magnificent!” “An enormous success!” These are just some of the glowing words I’ve heard people use to describe Wynyard Quarter – the redeveloped precinct near the western edge of Auckland’s waterfront.

Hearing this praise, I felt like I’d missed something. I haven’t spent much time in Wynyard Quarter, but whenever I have it hasn’t blown my mind in the same way. Sure, its buildings and parks are well designed, its cafes have character and the silos are quite novel. But really, without context, it’s quite easy to judge it as just one of a number of Auckland urban redevelopment projects; modern, pleasant, gentrified – certainly not a place I’d go out of my way to visit. Sir Bob Harvey has an entirely different take:

“It’s one of the great waterfronts of the world!” declares the former mayor of Waitākere. “Waterfront developments have to be treated with enormous care, because you can really stuff it up. It’s got to be people friendly. It’s got to have cafes and restaurants. You’ve got to make it live. And we gave Wynyard Quarter life.” As the former chairman of Waterfront Auckland, which had a heavy hand in the development, it’s understandable that Harvey would think so much of it. But there’s another reason why he, and many others, laud Wynyard Quarter with such acclaim – they remember what used to be in its place.

For much of its life, Auckland city’s waterfront consisted of separate wharfs, sealed off behind barbed wire. With ship yards, chandlers and bulk storage facilities dominating the shoreline from Mechanics Bay to Westhaven Marina, the waterfront was a grey, rusty spot on the map; a place the public seldom went, and only to buy some fish or boating equipment if they did. Such sprawling industrial waterfront estates were typical features in many countries throughout the 20th century. Which is why, in a great wave of retrospection in the early 2000s, multiple cities began taking stock of these areas, with the hope of diversifying them and making them accessible to the public as mixed use zones. It was in this spirit that the Ports of Auckland transferred ownership of the majority of Wynyard Quarter to the Auckland Regional Council in the early 2000s, which then worked to regenerate it and build the Wynyard Crossing bridge in time for the 2011 Rugby World Cup.

With Britomart and the Viaduct to the east, the development created an east-west axis that pedestrians and cyclists could use to travel seamlessly across the northern edge of the CBD, without being blocked off from some of the most picturesque harbour views in Auckland.
“I think people forget what a terrible relationship the city of Auckland had with the water,” says Jeremy Hanson, project manager at Britomart Group. “There were very few places in the heart of the city that you could actually go and spend time beside it. Wynyard Quarter has helped provide another big slice of that.”

On hearing such rave reviews, I decided to head back to Wynyard Quarter to see what I had missed on earlier visits. With the 10-year celebration happening today, August 7, it also seemed a good time to ask whether the development achieved what it set out to do. Did it actually become a place where people and families would want to live and visit, and allow them to connect with the sea? And if so, what are the features that set it apart from the more tacky, varnished waterfront developments?

When I went back down there for an afternoon stroll, I discovered the answer almost immediately – it smells like fish.

The Auckland Fish Market has been a fixture of the city’s seafood industry since 1904. Managed and stocked by Sanford and Sons, which operates an active fishing fleet and fishmonger from Wynyard Quarter, the fish market was revamped and reopened as a modern food court in 2018. The resulting odour, which permeates the alleys and courtyards around Jellico St, is the perfect embodiment of what separates the precinct from other “SoDoSoPa”-type developments – it’s a working marine environment jumbled in with a corporate and residential hub. Rather than simply leveraging the rough industrial aesthetic, Wynyard Quarter has deliberately embraced its barnacled roots. Other than Sanford, the area is home to a number of maritime businesses along Wynyard Wharf to the north, all actively working with the water as they’ve always done. Juxtaposed against the very modern ASB building, the Willis Bond apartments and the cafes and boutiques, the medley of industries and businesses is a carefully engineered attempt to balance the old world and the new.

Frith Walker, head of place making for Eke Panuku – the council-controlled organisation leading the regeneration – agrees this combination has made the quarter a success.

“It’s about retaining those very important marine services, which are vital, and also opening up the waterfront to the public. Parts of Wynyard Quarter are polished, but other parts are also still rough and working and proper,” she says. With an expected 3,000 residents and 25,000 employees across multiple office buildings by 2030, Wynyard Quarter has been designed so that neither group is isolated from the other, and that walking is easy and free flowing between the open spaces. The heavily landscaped Daldy St works to create a north-south axis connecting the apartments and cafes of Wynyard Central with the Datacom, Microsoft and IBM headquarters further towards Victoria Park, and the Amey Daldy Park sits in the centre like a kind of open green hub. Rapidly maturing native trees and shrubs spill out from every verge and swale; deliberate features that Walker says were carried out in accordance with Māori design principles in partnership with mana whenua, who were heavily involved in the quarter’s redevelopment.

Of course, the most well-known feature and another example of the working history of the precinct are the silos. Previously used to house bulk materials and liquids, they are now either decorative, used as venues, or as a canvas for the popular film screenings. The petrochemical companies that once used the silos have since moved to Tauranga, and a decontamination process is ongoing for a number of the areas.

“Those bulk storage guys were incredible partners for us to work with,” says Walker. “They were generous and clear because it wasn’t always safe or straightforward. There’s a huge amount of work being done around decontamination.”

“We made the weird decision quite late in the piece to screen the movies onto the silo rather than on a screen on the gantry, which was the original plan. But we put them on the silo and it worked. So that’s part of the charm.” 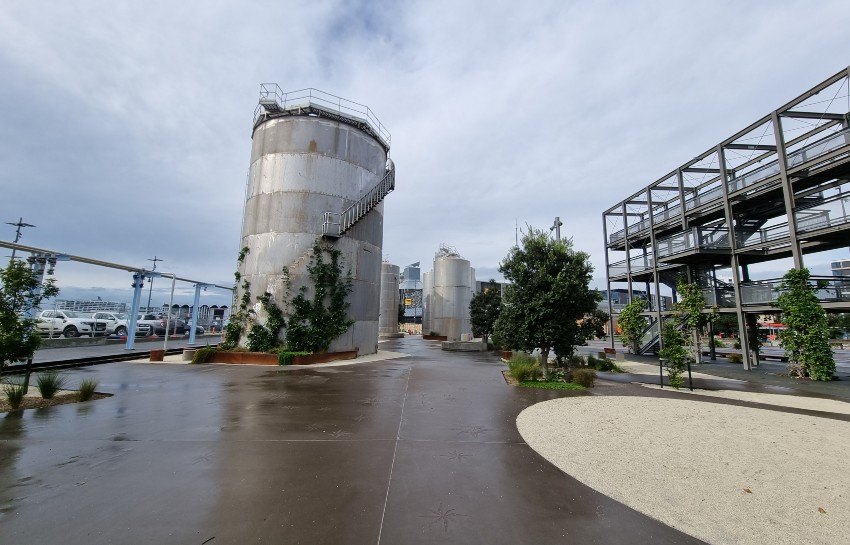 Patrick Clifford, principal at Architectus, which worked on much of the quarter’s design and the master plan, says keeping the silos is just one of many instances where a natural decision to retain a piece of infrastructure added so much to the end product.

“When we discussed the silos, they were something we never wanted gone, even if they couldn’t be used. They had memory and scale. But at the time in the 2000s, people weren’t all that comfortable with density and height.

“We had to work really hard to keep the rest of it rusty. All the features: the park, the artwork, the sculptures, the native trees and bits of old infrastructure, all of it has gathered together like barnacles on a mooring rope. It’s a fantastic, ongoing project.”

When you’re not distracted by the silos, the ASB building’s “decaying leaves” exterior, or the avant garde playground, it’s easy to see what he’s talking about. Almost every feature, from the corten steel benches to the vine-covered gantry to the sunken tram tracks have been deliberately preserved or modified to pay tribute to the old industry, and somehow infuse it with a sense of nature.

Residents Mark and Pamela Peryman moved to Wynyard Quarter 18 months ago, after they sold their North Shore home. They say the balance between the industries, residences and businesses has made it a fantastic place to live.

“We love it,” says Pamela. “And it’s not just old people living here. My son lives a few apartments down from us.”

“People think it’s quite noisy too,” adds Mark. “But it’s not. It doesn’t have the same nightlife as other parts of town. Down at the end of the wharf you can sit by the water, and it almost feels rural. It’s very serene.” I follow the couple’s tip and head down to the end of Wynyard Point, where Eke Panuku plans to begin phase two of the development and construct the future park space – currently cordoned off for decontamination from petrochemical storage.

Mark’s right; there’s nothing but the red bill gulls, the fresh salt air, and the green Waitematā lapping at the wharf.