Nobody in Auckland knows where they can pee any more. Self-described ‘SheWee Lady’ Judy-Anne Dentice has some ideas.

Judy-Anne Dentice wants to send a SheWee to the prime minister. Following the conflicting inter-bubble toilet advice that arose from Monday’s press conference, where Jacinda Ardern warned Aucklanders “if you haven’t got a good bladder, don’t stay for long,” Dentice thinks she can solve the dunny dilemma. “I would have been all over that,” laughs the part-time nurse and part-time SheWee distributor for New Zealand. “I’m always up for a bit of SheWee chat.”

The SheWee she is referring to can best be described as a flat, flexible funnel that allows users, who otherwise wouldn’t be able to, the chance to pee standing up. Since its invention in 1999, the cult of SheWee has gone global, with one sold every three minutes across the world. In more recent times of pandemic restrictions, sales have boomed 700%, with the Guardian declaring that 2020 has changed urination due to the rise in portable device use.

SheWee’s journey to New Zealand began, naturally, during a Rod Stewart concert at The Mission Estate, back in 2005. Dentice was there with a friend, and both had recently had babies. “We were drinking a lot of wine – those were in the days when you could bring heaps with you,” Dentice says. They quickly became desperate to use the toilet mid-show, and found themselves at the end of a “hideous” portaloo line. After a few minutes of waiting, her friend grabbed her tightly by the wrist, announcing that she would wet her pants if they didn’t act immediately.

The pair turned and sprinted behind the line of portaloos to find a private spot to relieve themselves. In the darkness, Rod Stewart crooning in the distance, Dentice realised that dozens of other women had followed their lead. “I just looked at the scene of all these poor women squatting in the dark and I thought ‘there’s got to be a better way’.”

Dentice began doing her research, convinced that the first person to come up with a urination device to fix her portaloo problem would become a millionaire. “I really just put it out to the universe,” she says. Just a few weeks later, settled on the couch with a glass of wine in front of Dragon’s Den UK, Dentice was gobsmacked to find the universe had heard her call. A woman named Sam Fountain was pitching to the dragons the SheWee, a discrete plastic device that allowed the user to pee while standing up.

The dragons were disgusted by it but Dentice was thrilled, tracking down Fountain’s details immediately and sending her a frenzied email asking where she could get one in New Zealand. There were no stockists here, but Dentice had a plan. “I thought ‘if I want one, I know a hundred others who would want one too’.” She made a bulk order from the UK and eagerly awaited their delivery, planning to dish them out to “basically everyone” for Christmas.

When the order arrived and she was able to take the SheWee for a spin, Dentice was delighted. “It gave me this instant freedom that I had never had before,” she says, explaining that she grew up on a big farm with four brothers, and was ridiculed everytime she had to pop a squat on family adventures. “Squatting on stinging nettle, squatting on the beach, squatting in the dark at a campsite when everyone’s flailing the torches around on your bum, squatting over the bait bucket,” she laughs, “I don’t know how many times I’ve had to do it in my lifetime.”

Armed with the SheWee, Dentice peed everywhere and anywhere. “I stood and peed with my boys against a fence on a long drive, I peed off the side of a boat,” she boasts, admitting that she keeps several SheWees stashed away for any surprise situations. “I can go wherever I want now and not have to worry, because I have SheWees everywhere. I’ve got SheWees in my car, I’ve got SheWees in my bag, but of course I do – I’m the SheWee lady.”

The SheWee lady became official when she secured distribution rights in New Zealand, soft launching through a handful of Trade Me listings. People were quick to respond with their distaste. “I had this dude sending me all these messages that I was revolting, disgusting, unladylike,” she recalls. “It was just ridiculous. You’d think I was trying to sell something even more scandalous than sex toys.” Trade Me took the listings down following the outrage. The move disappointed Dentice, who says the SheWee can genuinely change lives. 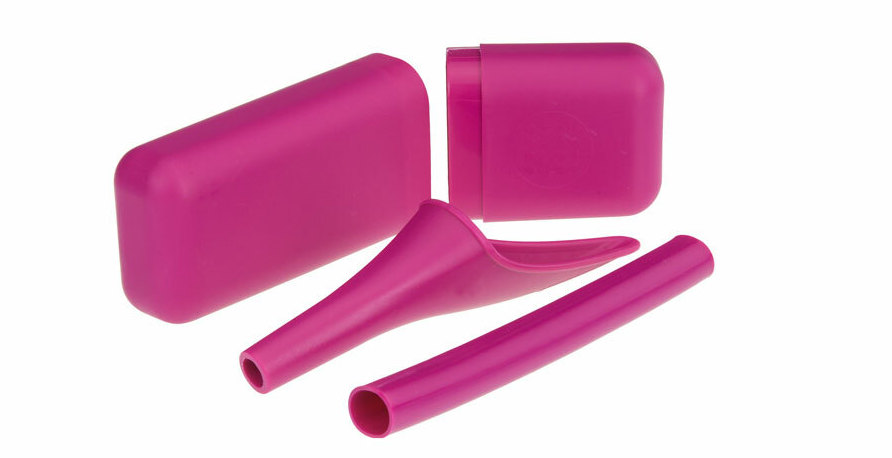 As a nurse, Dentice was extremely motivated by the health and accessibility benefits that devices like the SheWee can provide. “For those who have incontinence issues, they are really good for bladder training. For those who might otherwise be catheterised, this can allow them to pee from the edge of the bed.” She speaks of countless stories she has heard from women who, due to having a weak bladder, have put limits on their activities. “Eventually they just stop going out on boats, stop going for long walks, because it’s just not a possibility for them.”

Illustrating her point, Dentice says the SheWee has been embraced in Aotearoa by those looking for more flexibility when out and about. “Keen fisherwoman, climbers – one woman even took her SheWee to the top of Mount Everest.” The products are stocked in Hunting and Fishing and Bivouac Outdoors stores nationwide, and Dentice has been supplying offshore packs for the New Zealand Army since 2007. “It’s been a real uphill push. We’re talking about something that people think is too personal to talk about, but slowly people have realised the benefits.”

Which brings us to 2021 and another Covid-19 outbreak that has seen people’s movements restricted and, until recently, public toilets shut down for safety reasons across the country. Dentice says there has been a “steady increase” in local sales since Covid-19 began last year, but she noticed a distinct spike during last summer’s festival season. “I’ve really been promoting the use where there are no toilets,” she says. “It gives you so many more options.” For users on the road, she recommends “giving it a shake and popping it back in the container – you can wash it when you get home.”

Although she is yet to see a notable uptake following the latest easing of restrictions, Dentice received a call this week from a store in Te Awamutu, currently within the Waikato alert level three boundary, who had three separate people come in and ask for SheWees in one day. For Aucklanders in particular, Dentice says people should consider the freedoms that could come with SheWee use. “If you are really serious about controlling the spread and not entering someone else’s home, with all of those different surfaces, then you should think about it.”

With a SheWee in hand, Dentice says you can rise above the confusion and easily stick the current advice to stay outside. “Instead of worrying about whether or not you can use their toilet, you just have to ask ‘can I borrow your lemon tree’,” she laughs. Although she won’t be indulging in any outdoor bubble meetings due to being an essential health worker, Dentice reveals one final surprising benefit that comes with taking the SheWee out for a hoon in one’s own backyard.

“I don’t like to skite, but let’s just say my citrus trees are doing very well.”