It’s been a rapid rise to the top for Peach’s Hot Chicken. How’d they do it? And can you perfect their secret recipe at home during lockdown? Chris Schulz finds out.

Alex George knew it couldn’t last. In 2017, he and his wife had left their jobs to launch a food truck specialising in fried chicken, based on a family recipe. They bought a tiny, single-axle caravan that used to serve miso soup and ice cream at the beach, painted it white, ordered some stickers, and began rolling into events around Auckland.

Word quickly spread about the new chicken king in town. Just three months after launch, queues were stretched as far as the eye could see from the caravan’s tiny window. People craved George’s take on authentic, Southern-style fried chicken. “It was absolute carnage,” says George, who called their truck Peach’s Hot Chicken. “We’d sell out everywhere we went.”

The problem? There wasn’t enough room. At downtown Auckland’s Albert Park for the Laneway music festival, they’d regularly serve 800 hungry punters ordering from a menu of spicy fried chicken burgers, mac and cheese and tater tots. The truck was just 3×5 metres, barely enough room to fit George, his wife Olivia, and the family and friends they’d roped in to help.

Then there was the fat. “We would get to about 170-180 portions [of chicken] then we’d have to change out the oil,” says George. “The oil gets too shattered. You could smell it. It tastes burnt.” With no filters, the entire 20-litre batch needed replacing, and that’s a tricky job to do in a tiny caravan.

The solution? George would tip the old oil into buckets, carefully carry it out of the caravan, then heat up a brand new batch, a process that would take up to half an hour. Meanwhile, service would grind to a halt. “You’d have to drop everything … and you’d do it as fast as possible,” he says. “It was a big bottleneck for us.” Just a few months after launch, George’s fried chicken joint had outgrown its home in a small caravan. He added more fryers, set them up outside the caravan, and encouraged friends and family to help out. “That’s how we would do 800 burgers: me, Olivia, her mother, Olivia’s sister, her partner, and then her partner’s brothers,” he says. “It was ridiculous.”

The crowds kept coming, demand kept growing, yet the operation was still too small to keep up with demand. But they had no other option. “We kept going another year at that point,” he says.

George is American. He grew up in Nashville, the home of fried chicken, and often ate the region’s specialty dish for dinner, cooked from a secret recipe by his mother, and grandmother. He met Olivia, a New Zealander, while working in a five-star resort. She asked if he’d like to spend a gap year in Aotearoa. He said yes, so they moved here, and haven’t left. Initially, George took on a job cooking at a nearby bistro, working seven-day, 90-hour weeks. He flamed out in three months.

Exhausted, the pair launched their own operation. First, they catered from Olivia’s mother’s kitchen, taking on “weird” one-off jobs while keeping an eye on the local food truck scene. “We thought, ‘Well, there’s a gap in the market for really good fried chicken in New Zealand,” says George. “We just knew we could execute it better and went after it.”

George’s version of the celebrated takeaway staple is inspired by the fried chicken his grandma used to make. It’s authentic: whole thighs are marinated, then crumbed and deep fried, served with pickles and sauces and a choice of spice level. That ranges from mild to hot to “holy cluck”. The quarters are George’s favourite, “just the fried chicken on the bread”.

It quickly took off. At events like Mt Albert Night Market and Food Truck Fridays in Britomart, they’d always sell out, despite delays caused by the oil switch-outs. After months of negotiation, they opened a restaurant in the suburb of Panmure, and expanded their menu to include craft beer and desserts cooked by Olivia, including key lime pie.

That took off too. “We completely miscalculated how popular it was going to be, and how busy it was going to be,” admits George. Queues would often run out the door and down Queens Road, with a 45-minute wait for tables. His mother-in-law helped with the dishes to cope with demand. “We go through a half-tonne of chicken every week and we’re only open for five days.” On weekends, when he pulls the restaurant’s roller doors up at 11.30 each morning, every single table at Peach’s is full within 10 minutes. It stays like that until they close at 9pm. When the doors go down, hungry diners still swing by or text George, asking if they can get a last-minute burger. I tried this myself once – it didn’t work. “It’s chaotic at best,” he says.

Ask him why he thinks it’s so popular, and he’ll reply: “It’s the quality of what we offer … there’s not a lot of people who do what we do.” Then he’ll pause and give another answer. “The truth is, fried chicken never goes out of style. Everybody loves it – always,” he says. “Every culture, background, around the world, has some form of it. It’s a very accessible food.”

Right now, George isn’t dealing with hangry crowds, boxes of chicken thighs and litres of hot oil. He’s stuck at his Panmure home, with his wife and pets. He’s spent Auckland’s level four lockdown catching up on paperwork, and making heavy use of a brand new Playstation 5. He may not be cooking fried chicken right now, but he’s been busy trying to perfect his own version of his favourite takeaways from home. 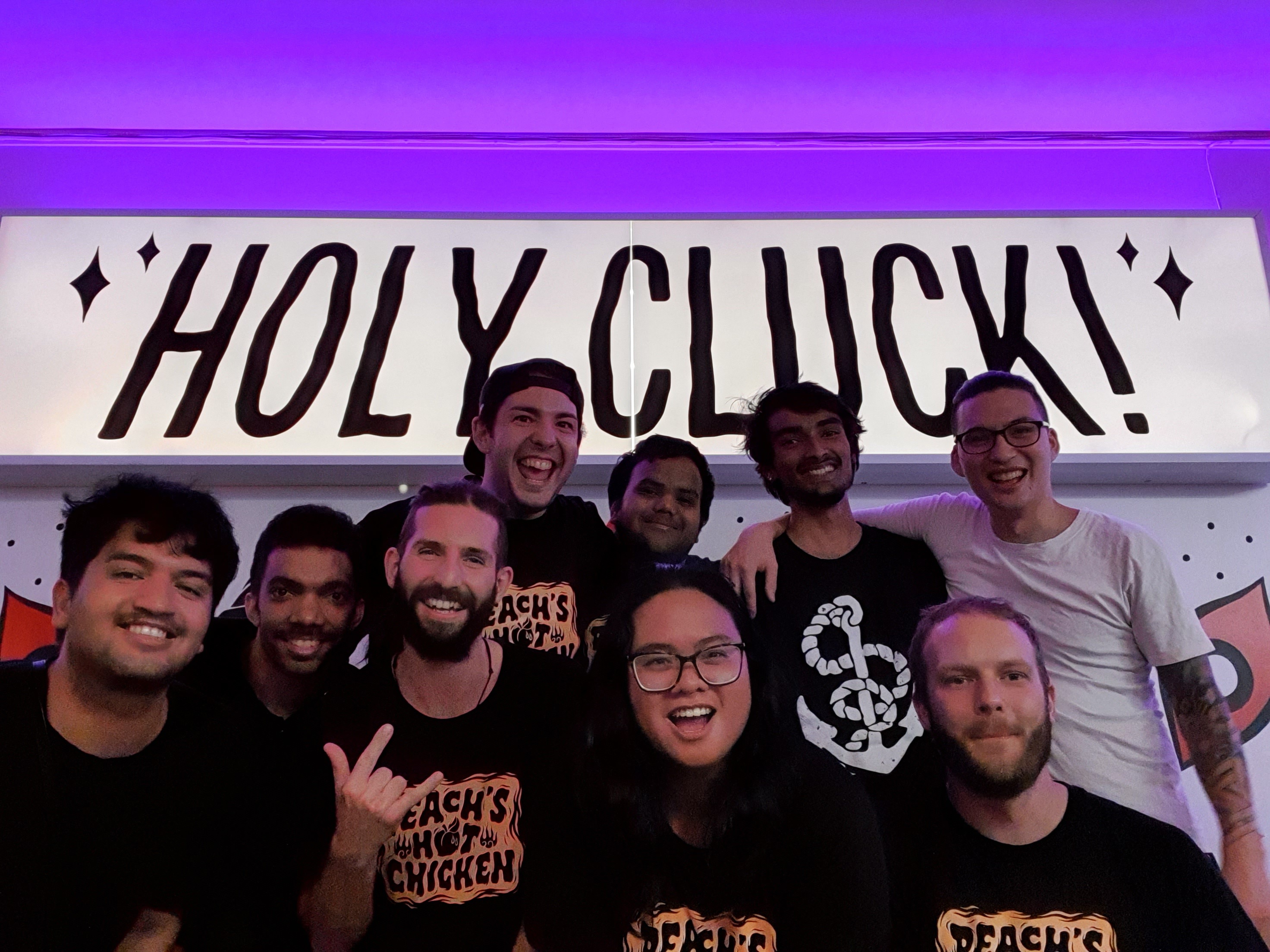 He’s made cheesecake, slow-cooked lamb shanks and dan dan noodles. “I made pizza this week and we enjoyed it and it scratched an itch,” says George. But, like everyone else, he’s missing the real thing. “It’s not proper wood-fired, lovely thin crust, chewy Neapolitan-style pizza.”

He knows fans miss his fried chicken when every takeaway joint in town is closed. George is prepared for “carnage” as alert levels drop and Peach’s gets up and running again. “These upcoming weeks are going to be really difficult and tough,” he says. “There are a lot of new rules we have to enforce.” He also knows they’re going to be as busy as they’ve ever been – if not busier.

That’s why George is happy to answer my questions about making great fried chicken. Everyone’s craving it, and people are trying to recreate it at home, with varying degrees of success. He admits it’s a complicated dish. “It’s a little in the ‘too hard basket’,” he says. “You need time, you’ve gotta clean up, you’ve got three litres of piping hot oil (to deal with). It’s a big mess.”

But for those brave enough to give it a go, he’s got some tips. First, the marinade. George says either yoghurt or buttermilk will work fine. “They’re all cultured cream – they’re the same thing,” he says. The purpose is two-fold: it tenderises the meat, and gives fried chicken its acidic tang. How long is too long? He suggests marinating chicken thighs in the morning, so they’re ready in time for dinner. “Six hours is good.”

How about the batter? When I interviewed Taskmaster NZ’s David Correos recently, he suggested using cornflour for a crispier finish. George says Correos is onto something. He’s got another suggestion too. “Dredge it in flour and spices and let it set for a bit,” he says. “When my grandmother would make fried chicken, she’d … bread it in the flour and let it sit on a rack. The buttermilk soaks up all the flour and it gets this skin around it, then she’d dust it again. You create all those nooks and crannies, those valleys and peaks of really delicious fried chicken coating.” Some of the food on offer at Peach’s Hot Chicken (Photo: Victoria Baldwin)

Finally, the oil. This is a little more complicated. Here, George says I’ve been doing it all wrong. “Coconut oil is a good way to turn an already calorie-dense meal into a calorie comet,” he says. So coconut oil is out. You want to use a lighter oil. “I would use something like canola or a mixture of canola and shortening,” says George. Make sure it’s hot, and turn on the vents. You don’t want your whole house smelling like chips.

Hungry yet? You’re not alone. If you’re craving a fried chicken sandwich, you could attempt to make your own. Just be warned: now you know the secrets, you might be tempted to eat it all the time. George says that’s not a good idea. “You’re eating something that’s submerged in fat,” he says. “It’s not meant to be enjoyed every single day.”

But if you can’t be bothered cooking it yourself, you can just wait until alert levels drop and Peach’s Hot Chicken opens again. That’s what George is doing. He hasn’t cooked fried chicken at all this lockdown, but he can’t wait till he’s back in the restaurant, serving hungry diners and dealing with the thrill of a busy service again. “I’m very excited to have my first baller sandwich when we open back up,” he says. “I do love it.”