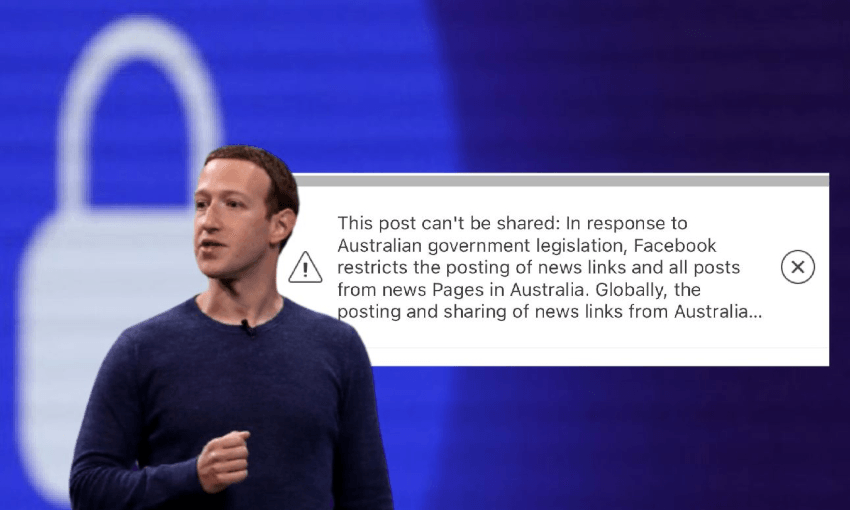 Duncan Greive analyses a shocking development in the global pushback against big tech.

At 7.38am today a short email arrived from Facebook News Partnerships. It contained a total of five sentences, the most important reading: “I am writing to confirm that due to new laws in Australia, from today we will reluctantly restrict publishers and people in Australia from sharing or viewing Australian and international news content on Facebook.”

Despite its matter-of-fact tone and brevity, it could hardly be more consequential – this is the end (for now, maybe forever) of Facebook as a news distribution channel in Australia. Facebook says news represents less than 4% of content on its platform – but for publishers it can be the source of as much as half their traffic. And for Facebook, the risk is that even if it is only 4% of content, if users consider it critical, do they become less reliant on the platform?

This decision impacts New Zealand operators, too: more than 500,000 New Zealanders live across the Tasman, with many avidly consuming news from news organisations here. It’s as if our second-largest city has dropped off the map overnight. It means, for example, that if you live in Australia and follow The Spinoff on Facebook, links to Spinoff content will no longer appear in your feed. (Please consider instead downloading our app and signing up to our newsletters.) If you try to post our content (or any news organisation’s content) from Australia, you’ll see this:

The timing is instructive – Google, which had previously held firm with Facebook on its own, far more consequential threat to withdraw search from Australia, yesterday capitulated and signed a revenue share deal with Rupert Murdoch’s Newscorp. Google has been doing deals with all major news providers in the lead up to the code passing. In total, Google will be paying at least $100m a year to evade the code.

There will be much more to come on this story, but here are some immediate questions it raises and answers.

This has been brewing for months – what’s the background?

Former head of news at Newshub, Hal Crawford, has been covering the saga for us, and outlined the positions in September of last year: “Australian consumer watchdog the ACCC has crafted legislation so that every Australian news organisation has a right to strike a deal with Facebook and Google over what they will pay that organisation for indexing, linking to, and summarising its news content.

“There is an underlying assumption that there is more value for Facebook and Google in this relationship, and therefore the mandated payments only flow from platforms to news. The law is a bargaining law: when the parties can’t agree, it appoints an independent arbitrator to choose which of the two camps’ final offers is the fairest. From that moment, the deal is binding and there are very heavy fines – up to hundreds of millions of dollars – for each breach.”

It says that its relationship with news media is very different from that of Google. “Google Search is inextricably intertwined with news and publishers do not voluntarily provide their content. On the other hand, publishers willingly choose to post news on Facebook, as it allows them to sell more subscriptions, grow their audiences and increase advertising revenue.”

This can be read as them being furious with its big tech counterpart for blinking. But it’s also a reflection of market power – Microsoft had signalled a willingness to engage with the arrangement through its Bing search service, meaning Google ran the risk of losing the Australian market. No search substitute product exists with any kind of penetration and functional similarity to Facebook, perhaps explaining its comfort with this level of aggression.

Does Facebook have a point? Here’s tech investor and analyst Benedict Evans on the contradictions it entails:

“In principle, taxing internet companies to subsidise news provision is a coherent policy decision, but instead Australian politicians have convinced themselves that this is a competition and copyright problem (‘Google would pay if it didn’t have market power’ – even though no-one has ever paid to link), and that these links have more value to Google than the newspaper. Hence Google and FB are now being told they have to link, have to pay, have no idea what they’ll have to pay and no control over the links. Unsurprisingly, they said they can’t do business like this and might have to leave.”

The big experiment – how will audiences respond?

One thing which was both brave and fascinating about Stuff’s decision to quit posting to Facebook last year was how little was known about its impacts. Would its audience simply substitute that behaviour for going direct to homepage? Or start visiting organisations like Newshub and the NZ Herald that remained avid Facebook posters?

Without access to Stuff’s data, it’s impossible to know – but the fact it has stayed with its experiment appears instructive. It does appear to have lost some total audience share, but it’s not yet clear what relationship that has to revenue – it’s possible that users heading to the homepage read more stories, and thus make it a wash in terms of ad impressions, for example.

Thrilled to end the year on a journalistic high – @nzherald extends its lead as NZ’s biggest and most popular news website. With a monthly unique audience of 1.877m, we’re ahead by 176,000 (Nielsen). Thank you to our loyal audience including 92,000+ Premium digital subscribers!

The bigger question is how the vast Facebook audience will respond. Will they direct their anger at government for making Facebook less useful? Or Facebook for breaking its service rather than contribute financially to news in Australia? Will they simply start going to homepages again, like the good old days, or simply consume less news? And what will this do to the news ecosystem? For all its complexities, Facebook has been a great equaliser, allowing startups (like, say, The Spinoff) to achieve large audiences in a short space of time. That period of new entrants and fresh energy might be stifled if sharing becomes a far smaller amount of traffic.

The fact this is happening during a pandemic raises the stakes considerably, too – there is a chance Facebook becomes a mess of disinformation with no news content to counterbalance it.

Whatever happens, the world will be watching. Not least New Zealand, which shares (mostly) close relations with legislators across the Tasman, and follows trends there more closely than most. If it passes without major tumult, don’t bet against your Facebook feed changing here, too.

A note for readers of The Spinoff in Australia