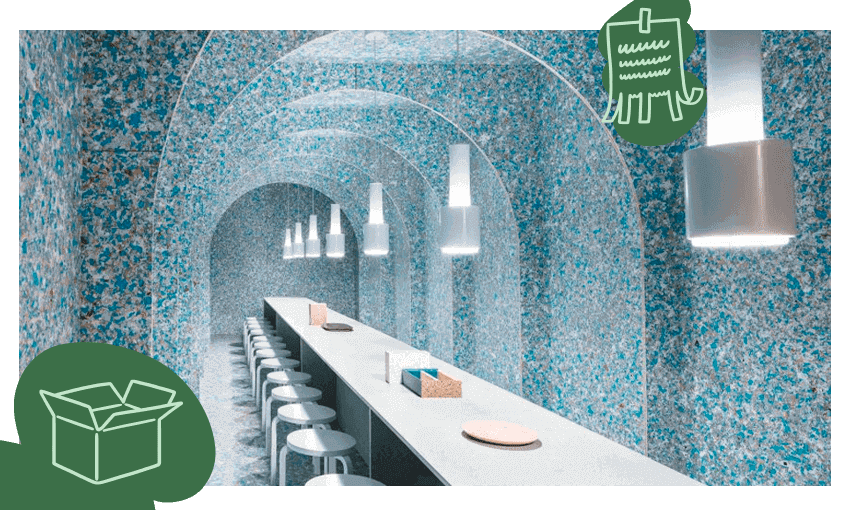 SaveBoard has the backing of a major logistics company and is selling into a market short on in-demand building supplies. But even its CEO says the low-carbon building materials startup can’t save the industry.

For the last 10 weeks, every two-and-a-half minutes a factory in the Hamilton suburb of Te Rapa has been churning out building materials made from the sorts of plastic waste that our food, drinks, packages and mail come in.

Operating a working week of five eight-hour days at the start of late 2020, production in January ramped up to three 24-hour days a week. But SaveBoard hasn’t gone “full throttle straightaway”, says chief executive Paul Charteris; current output is half the factory’s 200,000-board capacity. “It’s a balancing act, matching production with demand. We’re getting close.”

It can’t have come at a better time. The building materials manufacturer produces a low-carbon alternative to plasterboard, more commonly known in Aotearoa as gib board. It’s a product in hot demand, yet supply is strained. Last week, Winstone Wallboards, New Zealand’s only manufacturer and largest marketer of gib plasterboard, announced a freeze on all new orders for July 2022 deliveries onwards. Instead, gib will be made available through an “allocation model”. A backlog of orders, and the resultant longer lead times, caused by last year’s lockdown was the explanation.

Even if SaveBoard were to reach full capacity, transforming 4,000 tonnes of plastic waste, it would occupy only about 2% of a market dominated by Winstone’s 94% market share. Still, the global pandemic has wreaked havoc with global supply chains, shipping costs and building materials, and SaveBoard is benefiting from the disruption. The company has been contacted daily by builders, developers and homeowners eager for alternative wall-lining products, says Charteris. While the startup is helping relieve some stress, it won’t be much, he concedes. “We can probably do about 600 houses a year but there’s 40,000-plus consented at the moment. We can’t save the building industry, but we can add capacity that doesn’t exist.”

SaveBoard may be a minnow but it’s got some serious backing from food packaging manufacturer Tetra Pak, sustainability and landfill solutions consultancy Closed Loop and logistics company Freightways. That last investor, Freightways, might raise an eyebrow – it’s perhaps best known for the portfolio of package and mail businesses it owns, including flagship courier brand New Zealand Couriers, with its red and yellow livery and lightning bolt logo. So why would it care about building materials? It turns out that for about 15 years, Freightways has traded at the edge of the waste industry – secure document destruction, e-waste recycling and even the disposal of medical waste.

Now it’s turned its eye to plastic. After all, coffee cups and discarded milk cartons still need to be picked up, processed and delivered before they are shredded and turned into plasterboard, says Freightways chief executive Mark Troughear. “The idea that you can build something 100% out of rubbish, here in Aotearoa, and get it into the hands of customers – we’ve had a massive amount of interest. About 300 potential customers have approached us since the initiative has been up and running.”

Initial interest might be there but part of the difficulty that upcycled building materials face is wider market acceptance; their success or failure depends on effective marketing against tried and tested products. Consumers do prefer low-carbon products as long as they’re cost-competitive with traditional materials, says Graham Burke, an executive director of the New Zealand Construction Industry Council (NZCIC), the peak association made up of bodies representing everyone involved in constructing a building. And if all else is equal and supply can comfortably satisfy demand, success wouldn’t be too hard to achieve. But: “If the client doesn’t want the product and designers aren’t going to specify it, then construction businesses can’t incorporate them.”

It’s a hard sell, and SaveBoard has anticipated the task. Under a heading entitled “Not perfect”, its website reads: “If you are seeking perfection, then SaveBoard is not for you. Use a brand-new product that hasn’t been used to give you a flawless finish or look.” Even its CEO notes the product has a “natural texture” compared with gib’s “perfect flat finish”. Burke says New Zealanders are accustomed to clean, “monolithic” interior finishes and some short-term resistance to products that have lines, creases, press marks and veins in the finished surface is expected. On the other hand, when it comes to building roofs, the ability of substrate board to help drain away water and remain durable is far more important than aesthetics. It may prove to be easier for SaveBoard to find customers for its roofing substrate product.

Similar technology in the US has more than a decade of use, including by electric vehicles manufacturer Tesla for the membrane roof substrate of its giant 200,000-square-metre “Gigafactory 1” plant in Nevada. Some 336,000kg of embodied carbon emissions were saved compared with substrate made from plywood. But SaveBoard isn’t a silver bullet, and Charteris recognises as much. A hundred more companies doing innovative work in different areas are needed to make a real difference, he says. “We’re still a drop in the ocean relative to the amount of waste.”

About 252,000 tonnes of plastic waste, or 8%, is dumped in landfills every year. Building a house and demolishing a building is more wasteful, with that waste making up between 40% and 50% of rubbish tips. At least half of it could be diverted if it was sorted though. As for greenhouse gas emissions, buildings are directly and indirectly responsible for up to a fifth of New Zealand’s emissions. Globally, construction makes up a third of the world’s overall waste, built from roughly half of the 100 billion tonnes of raw material extracted from the planet.

SaveBoard claims its products are not only low-carbon (less than 90% compared with traditional materials) but zero water, glues, chemicals or formaldehydes are used in the upcycling process. There’s no “green premium” added to the price tag – the business says products cost about the same or below equivalent traditional materials. Bulk orders are cut to length, eliminating unnecessary waste, and the processing factory at Te Rapa can recycle any offcuts into future products.

That circularity appeals to NZCIC’s Burke, whose first impressions are positive. SaveBoard is the kind of innovative solution that’s needed to help Aotearoa reach net-zero carbon emissions by 2050, he says. Yet, while the building and construction sector is onboard with the government’s ambitious climate change goal, it’s in the early stages of acquiring the knowledge and skills to build low-carbon, energy-efficient buildings. And, at a granular level, builders are still trying to figure out “where they can add their bit”.

Andrew Eagles, the chief executive of the New Zealand Green Building Council (NZGBC), wants the country’s processes and structures to drive the construction of greener buildings. “For instance, maybe half your development contribution costs are reduced or there’s a faster consenting process,” he says. “If we’re intelligent, let’s flip things to reward people who are building better, lower-carbon homes and buildings.”

NZGBC is the leading sustainable building not-for-profit in Aotearoa, offering green construction standards “Green Star” for commercial buildings and “Homestar” for houses. Five years ago, 500 homes were being built consistent with the “Homestar” rating tool, a mark of quality assurance that measures a home’s performance and environmental impact – similar to the energy ratings that appear on washing machines. In the last six months, 5,000 homes have been built accordingly, and that number could multiply by 20 this year. Eagles says New Zealanders – from consumers to corporates like Countdown, Fisher & Paykel Healthcare and Genesis Energy – are increasingly demanding cleaner, greener buildings. “We may see a switch from green products being the norm and dropping the ‘green’ tag to non-green products being labelled as something like ‘grey’ products.”

For all the buzz that sustainability generates, SaveBoard’s Charteris is slowly going about the task of winning people over. The current heightened demand for plasterboard alternatives may make him nervous – “we could sell out tomorrow” – but short-term client satisfaction mustn’t be a one-off, he says. The startup wants enduring customer relationships – the kind that construct homes and buildings out of upcycled coffee cups, used beverage cartons and soft plastics.