With crowd-friendly dance tunes and affordable drinks, a new dancehall and bar opening tonight is hoping to make going out more accessible for Aucklanders.

“In many ways, it’s fucking stupid opening a nightclub in the middle of a global pandemic,” says Sam Walsh, one of the three owners of a new dancehall and bar opening tonight just off Karangahape Road in central Auckland.

The trio, all originally from Hamilton and long-time Karangahape Road locals, have been friends for over 15 years and each have plenty of experience in the hospitality industry. Walsh is a familiar figure on Karangahape Road, where he runs art and book shop Strange Goods. He’s also one half of new publishing house Dead Bird Books. Ayesha Green (Kai Tahu, Ngāti Kahungunu) is a visual artist whose work is featured in the Toi Tū Toi Ora exhibition at Auckland Art Gallery. She recently moved back to Auckland after living in Dunedin for a couple of years. Joel Flyger is a musician, previously of bands DMA and Popstrangers. He returned to Auckland in March last year after five years overseas.

Their new spot Soap Dancehall fills a gap in the going out options for Aucklanders, whose choices are largely limited to either sit-down bars or intense night clubs. Soap Dancehall is designed to be something in between.


“We want it to be a place where people can go, feel comfortable, it’s not out of reach in terms of money and is just a really nice fun time,” says Green.

Standing in the soon-to-be-opened space, you can just as easily imagine having a late-night boogie on the dancefloor as perching at a table for late-afternoon proseccos with a friend.

The team’s business model is all about being lean: simple menu, simple drinks list, simple set-up. They’re focused on the key things they think people need to have fun, and they’re very happy for people to shift tables and chairs around in the space to suit their preferences and needs.

Beers all come by the can, including their house beer, fresh-tasting Korean lager Cass. The wine selections are all organic. There’s also prosecco, whiskey, rum. The most expensive price for a drink on the menu? $12.

“One of our goals was for our most expensive thing to be the same price as what was often the cheapest thing on smancier places’ menus,” says Walsh. Pies, toppers, quiches and packets of chips make up their no-frills tuck-shop-esque menu. Food isn’t something they’re too focused on here though, and they’re encouraging people to bring their own, especially if it’s from one of the many neighbouring restaurants.

It’s one of many examples – including inclusive prices and paying all their staff at least the living wage – of the trio’s community-centred approach. And while Soap Dancehall looks decidedly different to the swathes of trendy new hospitality businesses popping up in the area, they’re reflective and honest about their role in the gentrification of Karangahape Road.

There’s an emphasis on “positive, fun vibes” at Soap Dancehall, and music is central to that. What’s played through the sound system will be solely about what people want to dance to, the trio say, which means instead of gigs or big-name DJs, they’re opening up the music selecting role to “people that we know, people from the neighbourhood, anyone who’s keen to just come and play songs that people want to dance to”. 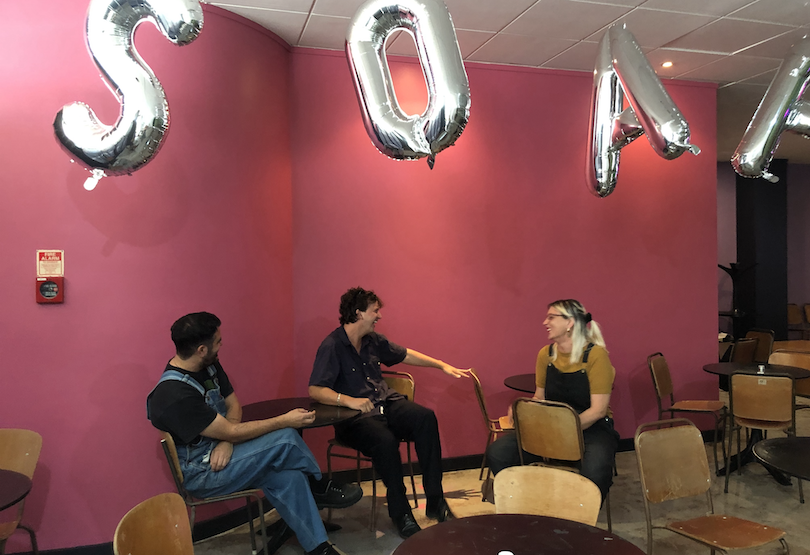 A tight budget meant that along with doing the renovations almost entirely by themselves, they also had to figure out the rigmarole of council applications and licences necessary to open.

It was an expensive process, summed up by the four licences on the wall that they’ve worked out are worth more than the entire fitout. “So we put them in $3 Warehouse frames,” says Flyger. He says that while licensing was the hardest part of a process that often seemed unnecessarily slow and confusing, they’re happy they did it themselves. “Now collectively our knowledge of this stuff is pretty incredible.”

Flyger says that opening a spot like this “was something we’d always talked about as a joke, then the ball starts rolling”. Surprisingly, what really got this ball rolling was Covid-19. “Our plans turned to smithereens, so we were like; why don’t we just pool our resources?,” says Walsh. They re-routed money from plans foiled by the impacts of the pandemic and got underway with the process.

It also allowed for a reflective moment for the three owners. While so often young New Zealanders move away to bigger cities overseas in search of more exciting urban experiences, more opportunities to dance and to socialise, they began to feel that they could instead improve Auckland.

“We’ve got it pretty good here, so why not just take some risk and invest more into what we already have here?” says Walsh. It’s an incredibly hopeful line of thinking that’s becoming far more widespread. We can shape Auckland into the city we want it to be, one night out at a time.

I am writing an allegorical novel about alpaca breeders and democracy