Claims that cherry pickers can pull in $400 a day should have all of us packing our bags and heading south. But is orchard work really that lucrative?

Every year, as a crisp and blissful summer thaws the South Island out of its languor, students at the University of Otago toss up their end-of-year options: they can either return to their homes and towns for the holidays, and maybe find meagre jobs in hospitality or retail. Or they can head west, into the mountains, and make an apparently monstrous haul of summer cash by picking cherries.

I was at that university a decade ago, and even back then I’d regularly hear rumours of how much money could be made plucking those plump little orbs: $300 a day was probably the largest score I heard someone boast – an astonishing rate for a feckless 20-year-old. But I never went cherry picking myself, so I never found out if that figure was bullshit.

Today, with the summer fruit industry facing a potentially disastrous worker shortage, the wages of fruit pickers are in the spotlight. The seven-week cherry-picking season starts around December 20, and because the first wave of RSE (Recognised Seasonal Employers) workers won’t arrive until January, orchards are desperately trying to muster idle New Zealanders to fill the shortfall – something like 5,000 heads in Central Otago alone. They’re offering free food, discount accommodation, and better pay, with one owner saying a good picker can earn a whopping $400 a day in peak season.

However, the appeals are being sternly rebuffed by locals, who claim that the pittance the orchards pay for strenuous and erratic work is not worth their sweat.

Facebook comments on a story about the fruit picker shortage (Photo: Screenshot)

So what’s the reality? Will a cherry picker make a decent amount throughout the summer? Or will they be forced to endure extreme discomfort for a paltry minimum wage?

According to Tim Jones, CEO of 45 South Cherries and chair of Summerfruit New Zealand, it depends on the company. But because the pay is always scaled by productivity, an efficient picker can earn far beyond the minimum wage.

“In our business, I’d suggest the average picking rate over the last two years – and they were reasonably tough seasons from a fruit quality and quantity point of view – was about $25 or $26 dollars an hour for picking work,” he says.

“If I was to estimate what it might be this coming season, I would put at least another couple of bucks on top of it because we’re sitting on what looks to be the biggest cherry crop that we’ve seen in the district for a long time and the picking is going to be great.”

It’s difficult to imagine many people turning up their noses at $28 an hour – including entry-level journalists. So how does the pay structure work?

Again, Jones says it depends on the orchard, but at 45 South, a picker is paid around a $19-an-hour base rate for an expected 20 buckets a day – or 2.5 buckets an hour. However, for every additional bucket that a picker fills, they get paid a per-bucket bonus, which is determined by the day’s conditions and therefore the quality of the fruit. While other orchards may apply a per-bucket rate only, Jones says the systems are all designed to reward and incentivise productivity.

“And that’s what enables people to get up to that $25 and above per-hour rate reasonably easily, and particularly when there’s a lot of fruit to pick.”

The quality and amount of fruit available to pick – and therefore the per-bucket bonus – depends on the conditions of the day. Rain is the biggest influence. If it rains, the pickers can’t pick, and the fruit absorbs the water, causing them to split and spoil. So, if a summer shower makes for slim pickings, the per-bucket bonus goes up to reflect the longer it takes pickers to fill a bucket with quality fruit.

“Instead of just picking the fruit and putting in a bucket, pickers might be asked to actually look at the fruit. They might have to throw 10% of it out because it’s not up to the required standard. That takes longer than before, so the bonus rate or the packet rate goes up to compensate for that.”

OK, so now the most important question. Can someone really make $400 a day picking cherries?

Again, it depends on numerous variables. But Jones confirms that this outlandish figure is not, in fact, a fiction.

In the picking is good, then a nimble, swift-fingered worker can indeed earn $300 to $400 a day, he says. In fact, orchards usually have records of highest amounts of buckets filled – sometimes in excess of 70 by day’s end.

“I’m not saying that everyone could do it,” Jones says. “Which is why the easiest thing is to talk about what the average is, which for us has been $25 to $26 per hour.”

But what if you’re a lousy picker who doesn’t have what it takes to be a champion bucket-filler? Does it mean you don’t get paid or get the sack? It seems unlikely. Workers are typically on employment contracts, and due to the labour shortage, are needed desperately for the entire season. Of course, some companies have been known to be exploitative, so it is critical for any worker to thoroughly vet their employment agreements before signing and assert their entitlements once starting the work.

But if someone is just not suited to picking, Jones says orchards also require plenty of staff for pack houses, where, at 45 South, they get paid the living wage – $22.10 an hour.

Clyde-based journalist and former multi-season cherry picker George Driver says he was transferred to the packing shed when he first started as a 13-year-old because he was no good at picking.

“I didn’t realise they monitored each bucket – you put a number in the bucket so they can track you – and the cherries I picked were so shit that I got taken off picking and put into the packing shed to work.”

It wasn’t until a few seasons later that Driver took up picking again and started earning decent money.

“Thirty dollars an hour if the going’s good,” he says. “Probably only get a couple of days in a season like that though. If you get a tree full of ripe fruit and no split cherries, you might get a few days of six buckets an hour at $5 a piece.” 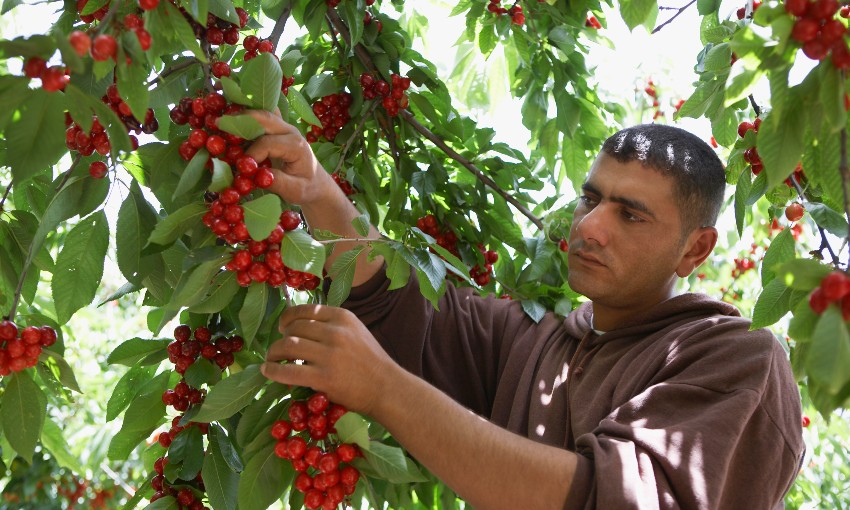 A good cherry picker can earn up to $400 a day if the fruit it plentiful (Photo: Getty Images)

However, having not picked a cherry in 10 years, Driver, like many others, doubts whether the perks are as good as they were back then.

“When I was picking the minimum wage was $14, so to average about $20 an hour was still really good. But now you’d be working hard for only slightly more than minimum, I feel.”

Of course, another feature of cherry picking that must be factored into the finances is the saving on expenses and rent. Many orchards offer onsite or nearby accommodation for far less rent than you’d normally pay: 45 South has four-person cabins for $100 a week, and camping options for $40 a week. Couple this with the free pizza and beer that employers are offering, and expenses will barely make a dent in the $780 after tax weekly income a worker would be pulling in at $28 per hour.

But this is just one company. Others may pay less. According to job search platform Indeed NZ, the average wage for pickers and packers in New Zealand is $21.98 per hour – just shy of the living wage. Then there are the harder-to-quantify variables like working conditions and management, which haven’t always been the best in parts of the industry. This is certainly a risk for anyone looking to make the huge move to Central Otago.

But until the 2,000 RSE workers turn up in early 2021, it’s a picker’s market. For those looking for a new gig, it might be prudent to shop around for the low-hanging fruit; researching which crowd pays the best rate, offers the best perks and is in the best location. After all, there are worse ways to spend two months than working in the fresh summer air of the Central Otago mountains.