Rebecca Wadey has an unnatural affection for homegrown reality TV, so the arrival of The Block on her doorstep was a big deal. The open homes? Double that again. //

There was never any point at which I which I wouldn’t have gone to The Block open homes. I love a local reality TV show at the best of times, let alone one that’s being filmed in my ‘hood with arguably the most likeable cast in reality TV history. I mean, Dunedin might have Daniel Craig but we have Damo at the dairy. That’s not even a level playing field. The only waver in my confidence came when a friend, who was planning on taking me up on my offer of parking in my driveway, sent me a text that read ‘Will be there 5.30am. Have packed portable stool, iPad, sunblock, raincoat, snacks’.

I contacted TV3’s PR department, clearly as a Very Important Member of the Media I should not have to queue with the plebs (i.e. my kids). I’m desperately bereaved now that the teams have moved out, their funny coloured Honda Jazz’s no longer parked on the side street. It would be plain rude of me to let them leave town before I’d even properly welcomed them.

So, the day before the Open Home I wrangled a private viewing. I followed the strict instructions to walk to Newell St from Pt Chev Rd (let’s just say, local lore has it that not at ALL of the residents have been star struck by this A List production rolling into town, and some haters have the council on speed dial should any resource consent conditions, such as parking, be breached) and was greeted at the site by the lovely Amy from TV3 publicity.

I forget what she was saying because OMG there’s Peter Wolfkamp talking to some tradies on the footpath and Maree is right – he is kind of cute! I interrupt Amy (shoes off something something, living areas and landscaping embargoed something something) – ‘is Martin the hot Scottish builder here today?’ ‘No’, she says ruefully. ‘Sign him for his own show now!’ I hiss. ‘He can be the new Coxsy!’ 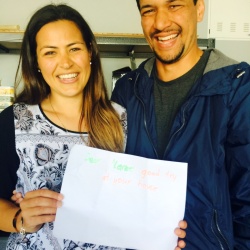 From Toby: ‘Dear Maree, good try on your house’ 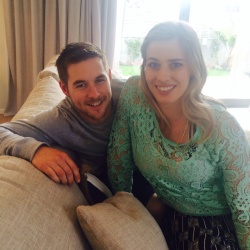 Ben and Quinn hanging at Jo and Damo’s. So Melrose… The kids mosh pit. A three hour wait will do that to them. 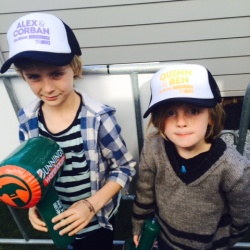 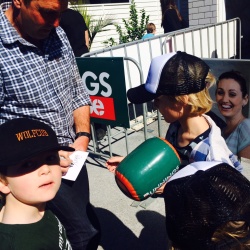 Note Peter ‘The Wolf’ Wolfcamp’s son and his cool hat.

First stop, Alex and Corban’s house. They’re leaving as we’re entering, sadly this is to be my only ever interaction with the elusive Alex and Corban. Although I did notice they were totally checking out my gold Beau Coops for Karen Walker shoes that I parked in their room-winning garage.

First thoughts, upon entering their house, was WOW. Or, to steal another phrase from the reality TV vernacular, it looked expensive. I guess I was expecting the sort of house built by a time crunching reality TV show and decorated by someone who until recently was a buyer for the ‘fashion’ brand Pagani (I’m sorry Alex. Call me?). Seriously, this house is beautiful. It looks like no expense has been spared either. A luxurious, Scandinavian feel, masterful colourful palette and Tom Dixon trinkets scattered throughout.

We leave house number three and trot down the driveway to Jo and Damo’s and OMG Jo is in the garden doing some planting. Her and Damo run over to chat and happily pose for a photo holding cards my sons made them (shameless tactics, I know). Damo says they’d love to move to Auckland but can’t afford it. I confidently tell him there’s never been a better time to buy in the Chev. That might not be true.

Shoes off again in the garage, where Damo’s lightbulb still seems to be broken and the infamous Block BBQ stands front and centre. Inside is a lovely, sunny, kitchen and lounge opening to a generous backyard that offers glimpses of Meola Creek and beyond. Ben and Quinn are lounging on the sofa as if they’ve popped over for a cuppa. This spins me out. It’s like Melrose Place only without Amanda around to sleep with the men and burn the place down.

Quinn tells me she was really tired those first few weeks but is feeling good now. She says that they’re looking forward to heading home to Christchurch and that as much as they’ve enjoyed Auckland they’re definitely more suited to the quiet life.

Next stop is their pad. And. Well. I feel sorry for them. It’s obvious that this house has been done on a much tighter budget than the others, without the winnings of splashy prizes and cash. The carpet feels cheap on my bare feet and the fittings lack the designer flair of the other houses. Still, there are aspects to the house that will definitely appeal to buyers and level the playing field; a large turning circle outside the garage makes a great second outdoor play area, awesome bifold windows in both spare rooms, glimpses of the creek from two of the bedrooms and a sun drenched balcony off the master bedroom.

I bump into Quinn again as I’m leaving and she says she’s really proud of what they’ve done, that it was obvious from the first week that they were in way over their heads but that they just tried to have fun and not take themselves too seriously. I remember how Alex cried once after winning yet another challenge, and said how awful she felt for Ben and Quinn and that she hoped they weren’t too disheartened. Is this how an All Black feels after playing Australia?

Man, I would love to go to a Block dinner party. Not a dinner wars one, obviously, but perhaps one where Damo’s manning the BBQ and I’m drinking wine with the ladies, discussing the merits of Auckland’s best vintage stores.

Last stop on the press tour is Maree and James’s house. By now I feel like I’m actually living Notting Hill. And to be honest, I’m every bit as excited as if I was meeting Hugh Grant and Julia Roberts. Speaking of Julia Roberts, Maree is gorgeous. Like, seriously beautiful. You can see how she was Miss Samoa new Zealand. Clearly the weeks spent on telly with no sleep, her hair pulled back in a ponytail and rocking a MaiFM hoodie didn’t do her justice but she’s here today, rested and with her hair blow waved, make-up on and quite frankly I feel giddy looking at her. But not too giddy to get her to hold up a letter from my son while I take a photo.

And that’s that. I skip off home high as a kite. It was just like that time I sold Kylie Minogue a pair of shoes in the ’90s. A brief interaction, sure. But I’m sure whenever she puts on those Blahniks she remembers the Kiwi girl who sold them to her, and the laughs and good times we had together.

The next morning my phone beeps at 5.40am. ‘We are here, 20 people ahead of us in the queue’. This is my friend who swears black and blue that she only does it for her son as it means so much to him. But at the end of a long, tiring day she admitted to me that when Damo came out, two hours into queuing in the freezing cold, she accidentally announced to the stranger next to her ‘I’m happily married but I’d tap that’.

Her and I were madly texting each other to pass the time before the doors officially opened at 9am. The people behind her had flown up from Christchurch for the occasion. Someone from Bunnings walked around handing out inflatable hammers, an excellent idea for a crowd of bored children to entertain themselves with. NOT. The woman next to me had come alone, save for her portable stool and knitting. She was unimpressed with the hammering. I enviably eyed up her knitting and wondered if it might be finished in time for me to wear. It was cold.

Eventually some volunteers came out and started handing out autograph cards. The kids went wild, screaming, jumping and climbing the barricades to catch a glimpse of them. ‘They’re nobodies’ I screamed at my kids, in an attempt to calm them down. The MoreFM photographer glared at me. Finally the crowds surged – the doors opened and the contestants ran out to work the line. Jo and Damo and Alex and Corban went straight past us and down to the back of the line. My kids lost focus in the scrum and were too small to make it.

My six year was all sweaty, flushed, over-excited and he started crying ‘I’ve missed them’ he sobbed. So I did what any self-respecting mother would do – I picked him up and pushed my way through to the front of the crowd. Maree remembered me, bless. (Such a good pageant girl) Autographs with Maree, James, Quinn and ‘Ben-Dog’ secured, we entered the houses where we joined the throngs of people oohing and aahing, reminiscing about the good old days, worried about the future of our new friends, but now confident in their ability to make it without us. Amongst Pt Chev though, there is a feeling that things will never be the same again. This must be how Wellington felt when all those hobbits left town.