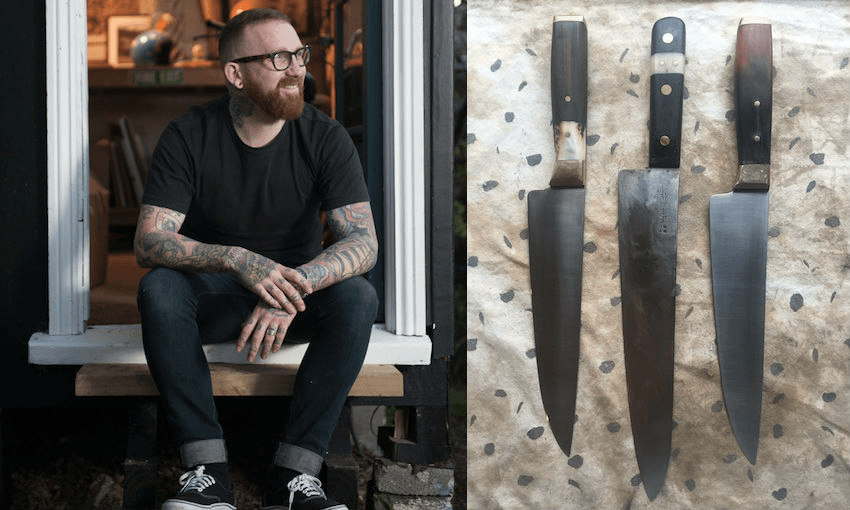 Chef Hayden Scott makes knives as a side project to his main gig working for Al Brown, and demand is growing (Photos: Baxter Richardson)

Blades of glory: The knives chefs go nuts for

Chef Hayden Scott makes knives as a side project to his main gig working for Al Brown, and demand is growing (Photos: Baxter Richardson)

In a world replete with generic knives, Auckland chefs are moving towards something a little more special.

Sam Mannering’s favourite knife is the one that cut his finger off.

Forged by legendary Kiwi craftsman Peter Lorimer in Omakau, Central Otago, the knife sliced so cleanly through the bone of Mannering’s left index finger, just above the second knuckle, that the appendage was later successfully reattached – but not before he sprayed the kitchen he was working in with blood.

“I then made a poor choice to go to some media launch at SkyCity later that day still loaded on ketamine, and there are all these photos of me bleeding all over Annabel Langbein and Lauraine Jacobs with this half-glazed look on my face,” says Mannering, a food writer, chef and restaurateur who co-owns Homestead cafe at the historic Pah Homestead in the Auckland suburb of Hillsborough.

In a world awash with mass-produced kitchen knives and the incessant obsession of gear geeks with steel blends and the Rockwell scale, New Zealand chefs are turning to function without sacrificing form.

“You know when things are made with love, it doesn’t matter if it’s something with truffles or mac ‘n’ cheese,” says Mannering. “And in the same way there are knives that, versus your average generic Global knife, are something made with love and care. It’s a totally different game.”

But Mannering says he couldn’t care less about the finer details of forging steel.

“It’s a little bit like molecular gastronomy to me. If you’re into finding that shit out, then fine, but I love the Peter Lorimer method of just taking a big lump of iron and melting it down, banging them out and shaping them into these really beautiful knives.”

Right now, no one besides Peter Lorimer knows as much about knives that just work than Hayden Scott. Right-hand man to celebrity chef Al Brown, Scott began crafting knives as a form of mental hygiene. Working by night, he produces a knife a week at maximum capacity under his brand Champion Knives, juggling the process around a young family and the ludicrous demands of the Brown food empire.

“Being a chef, to create a knife for myself to use, was a bit of a buzz,” says Scott. “Then lots of people said, ‘hey, shit, we’d like to buy one of those,’ and so it keeps growing and growing. Now I get lots of messages from people wanting to buy them and I guess it appeals to a certain type of person that likes the story behind things, and likes the personal touch.”

Scott sources his blades from Victory, a blue-collar company that supplies most of the major fish and meat-processing companies in Australasia. Utilitarian to a fault, they are the plastic-handled tools you might spot on a wharf or in an old tackle box – knives that, first and foremost, do the job.

“When I was 18 I spent a year working at Finegand freezing works in Balclutha,” says Scott. “The first day there, on the night shift on the gut trays, I didn’t really think I could handle that, but I sucked it up and ended up doing a full season. I saw it as building the skills to become a chef, you know? Being around the butchering of lambs and so on. Just using a knife every day.”

The knives he used? Victory. After a decade following Brown from TV show to deli spot to bagel shop, Scott took the ugly but effective blades from the freezing works and jazzed them up in much the same way the pair have their restaurants across Auckland.

For Brown’s own knife, Scott “took some beef bone from the restaurant [Depot] and inlaid that into the handle and it was extremely personal. I made it to make him feel happy.”

For Mannering, Scott crafted a knife with kohekohe wood from the front door of the Pah Homestead. It was the first of three Champion knives Mannering would buy.

“Hayden is one of those guys that just – even his cooking and his food – everything is made with so much love and care and authenticity, really.

“He was going out and getting these beautiful chunks of pōhutukawa with lots of amazing little knots in them, so you’ve got really, really interesting wood, and every point of this knife was just sort of extraordinary. Really I only need one, but I can’t help myself because they are just so beautiful.

“These things are built like iron shithouses – probably because they once were. But shit, if anyone puts my knives in the dishwasher…”