Perzen Patel explains the special place the South Indian breakfast staple holds in her heart – and how you can make it at home.

As a 16-year-old Indian living in Auckland in the early 2000s, I made my peace with the fact that my mother would never put coriander in our food again – there was no way she was paying $3 for a bunch. What I couldn’t accept was dosa, originally the staple food of South India, but also my favourite after-school snack, would no longer be a regular part of my life.

Mum tried making up for it by bringing home a dusty cardboard box of Gits Dosa Mix from the not-so-local Indian shop. But we gave up quickly because the dosas that box made (OK, I made) would stick to the pan and look like scrambled eggs had a fracture.

I spent many wintry Auckland mornings with my eyes closed, imagining I was biting into a crispy golden dosa stuffed with a delicious potato and onion sabzi, grated cheese spilling out of the sides.

My love affair with dosa has stood the test of time. When I’m arguing with my husband, I often tell him that the only reason I moved from Auckland to his childhood home in Matunga, Mumbai was because it’s the dosa mecca of Mumbai. Nestled in the back streets near his house are 100-year-old Udipi restaurants.

Udipi, a small place in Mangalore, India, is the original home of the masala dosa. Many believe that it was invented in the process of a Brahmin Adiga (cook) trying to get on the wild side. Since Brahmins weren’t allowed alcohol, he tried to ferment his own with rice. It did not work. So, he poured it out on a pan and made a crepe out of it. Dosha in Kannada means “sin”. Dosha, his attempt at sinning with alcohol, later turned into dosa.

As the Shetty, Nayak and other business-minded communities of South India moved out of Mangalore, they took their cuisine with them. Today, their Udipi restaurants are in every corner of Mumbai. Such is the popularity of Matunga’s Cafe Madras and Hotel Ram Ashraya that people line up at 6am on a Saturday morning. There’s no long, lingering brunch allowed here. You will often find strangers squeezed together on a table silently eating their dosas. These restaurants don’t even have a written menu. You’re expected to know what you want by the time you get to your table or choose from the five or six dishes the server decides to rattle off.

The one dish that they’ve continued to serve for over a century? Dosa with sambar and chutney.

When my husband and I decided to migrate back to New Zealand, I went into a kind of dosa frenzy. Three months before we left, I would have my morning shower and then head to Ram Ashraya by myself. I’d order myself my favourite podi ghee roast dosa, three plates one after another, and then sip on some filter coffee. It’s the kind of meditation I recommend everyone do.

A week before I left Mumbai, I accepted that I had to learn to make dosa at home. There was no way I was going back to a life of Gits again. 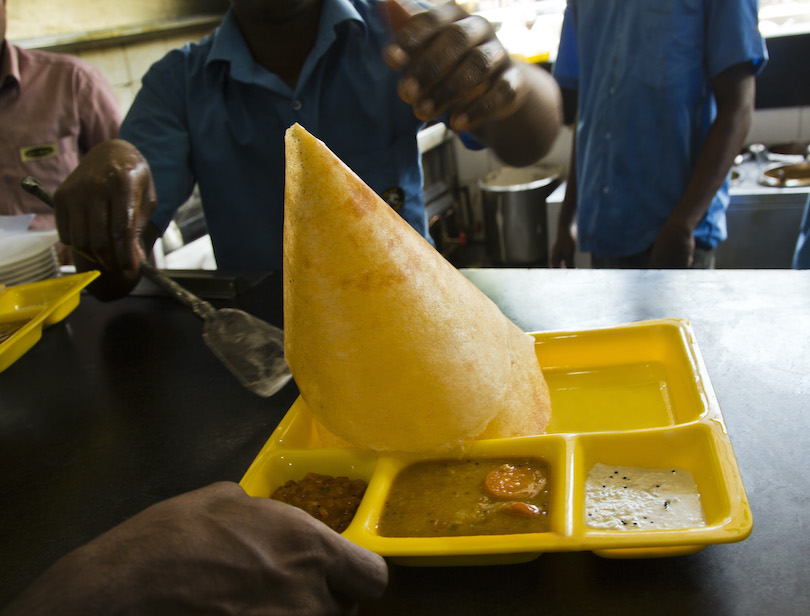 Masala dosa being served up at a restaurant in Chennai (Exotica.im/Universal Images Group via Getty Images)

Theoretically, making dosa at home is simple because all you need is black lentils and rice in a 1:2 ratio. My adventure, however, didn’t start well because I bought the wrong kind of lentil – the unhusked black urad rather than its Pākehā cousin – and all our dosas were dark grey. Another time, I started prodding them with my spatula, and they protested by sticking to the pan. Yet another time, I left the batter inside a cold oven which meant it didn’t ferment.

What’s worked in my favour is that I didn’t give up, unlike Mr Original Brahmin Adiga. Each time I make dosas, I learn a new technique. And since I’ve initiated my two boys into our dosa faith, they eat all the failed experiments, so it is a win-win.

My recipe’s below – I urge you to give it ago. But if you’d rather leave it to the experts, you could hit up one of my two favourite places for dosa in Auckland. Saravanaa Bhavan in the central city does the authentic South Indian ghee roast dosa – they’re the largest South Indian dosa chain in the world, starting in Chennai in 1981, and are open for takeaways at level three.

They’re also open for takeaways at level three, but I recommend heading to Maya’s South Indian Bistro in Flat Bush when we’re out of lockdown if you want to stuff your face with dosas – they have an excellent Sunday all-you-can-eat South Indian brunch for $20 per person. Mix the rice and dal in a bowl. Soak with water until just covered. Cover and leave in a warm place overnight. The top of your boiler is a great one.

In the morning, grind in your food processor/Nutribullet with a little more water into a smooth batter. It will take 3-4 minutes of grinding to get a smooth consistency. If you don’t have a powerful food processor and have a dry coffee grinder instead, grind the rice and lentils first and then soak them.

Add in the salt and spices, if using, and mix well.

In a flat pan, add a ladle of batter in the centre and move the ladle in concentric circles to make a thin crepe.

When bubbles form on the surface, and the dosa lifts from the edges, add a bit of ghee in the centre.

Put in your choice of stuffings – cheese, spiced potatoes or leftover roast meat.

Fold over and serve hot along with coconut chutney.