With the help of her faithful four-legged assistant, Jean Teng disregards commonsense and ‘only for pet consumption’ labelling to review dog food fit for a king (or at least a cavalier king charles spaniel).

Three months ago, I was reviewing fine-dining restaurant The Grove. Today, I’m reviewing vacuum-sealed frozen dog pizza. Such is life.

Dog On Restaurant serves up fancy food for fancy pooches. It takes the shape of our own favourites – like pizza, sushi or tacos – mostly to satisfy our desires for them to have the same experiences as we do, because we’re self-obsessed like that. It’s pretty cute. It’s also the kind of shiny influencer-driven business that thrives on social media, similar to Celebration Boxes, or the cat cafe craze that swept through our feeds not too long ago. A golden retriever? Blowing out the candles on its own birthday cake? That’s premium content, baby.

Dog On is financially backed by Bill Smale, the name behind North Shore’s “next-generation neighbourhood” Smales Farm, but the menu is conceived and cooked by a certified pet food chef and stylist – Sunny Won, the mum of Dog On owner Sam Kim. Won flew to Korea to complete a course in this very specific culinary art. “Mum comes up with the recipes and has created her own version of KFC chicken, Domino’s pizza, sushi and tacos. All the food is lactose-free and has no seasoning and spices,” Kim told the NZ Herald earlier this month.

The business is currently delivery-only (nationwide), with an Auckland dine-in restaurant opening soon, delayed due to the Covid-19 pandemic. Dogs will be able to order their own chef-made hot meal, not just beg for a cheeky chip sneaked to them under the table. In further silly but wholesome frivolity, they will get their own bean bags to lie around on, and can invite doggie friends for birthday parties. Call it ridiculous all you like, but there is potentially a huge market for it: in 2019, there were about 103,000 dogs registered in Auckland alone.

The fact that Dog On exists says something about current food culture, and our boundless desire for increasingly novel dining experiences. Instagram, and other avenues of food media, has encouraged a culture of excess that lets these faddish trends thrive in fleeting cycles before fading away quietly. (I’ll never forgive or forget freakshakes.) Add to this the normalisation of eating at restaurants – it’s now treated as an everyday habit rather than a privilege – and it almost feels natural to believe that dogs deserve a nice meal out too, never mind the fact that many would happily eat cat shit from the garden.

Human-grade ingredients are used in Dog On’s meals – no cat shit here – which means everything is technically safe for humans to consume. There are no bones, feathers or preservatives either, leaving only “nutritious goodness” for your pups. All up, it seems above board. So I’m going to eat some, and review it. When I started this whole food-writing business, I pledged to cover all the highs and lows of the industry: from fine dining to fast food, pubs to food courts, and bistros to, obviously, dog chow. It would be remiss to ignore such a milestone in our culinary history; this dine-in dog restaurant will be the first one in Aotearoa.

I’ll have an assistant. Oreo, my nine-year-old shih tzu mix, is already a bougie brat, and fussy to boot. I buy him overpriced grain-free kibble and have fed him a raw diet on and off the last nine years – a somewhat cult-ish subculture of dog cuisine that I would describe as the paleo regime of the canine world, except probably tastier (to a dog).

It was Oreo’s birthday a month ago, so we bought one Birthday Pack Gold (includes a cake!) and a slice of salmon pizza – total cost $48.80, including a first-time customer discount of 20% – and had a belated birthday feast.  Read on for a joint canine-human food review, where I – spoiler alert – discover the importance of salt.

Disclaimer: Dog On’s menu is not for human consumption. Eat at your own risk.

Taste: This is the only one I spit out, driven by some primal instinct that I should not be eating it. Bitter, meaty and metallic. Felt a bit like Gordon Ramsay in Hell’s Kitchen, and, like a medieval king, briefly considered feeding Oreo my chewed-up remains.

Canine-approved? Oreo was not having it. Rejected it at first, even when I tore it up into smaller pieces and did the baby voice. Ate some after I walked away and didn’t immediately offer anything better.

Taste: Just a whiff of chicken

Canine-approved? Reluctantly ate the piece I gave him but didn’t come back begging for more. Ran off to the other end of the house, in fact – the canine equivalent of complaining to the kitchen.

A sumptuous spread (but skip the jerky) (Photo: Jean Teng)

Smell: These smell like dog food – like canned dog food, or maybe a seafood broth you get served in a small shallow porcelain bowl at an expensive restaurant. One or the other. Perplexed and terrified.

Texture: I would have killed for some rice. Dogs can eat rice, right? As it is, extremely stodgy.

Taste: Bland and dry white chicken breast. Black sesame? Hmmm. Sorta like what I’d expect white people’s “meatloaf” to taste like, if I was forced to think about it. Not bad, but don’t expect a thank you note for your dinner party.

Canine-approved? Oreo is a worldly and sophisticated dog, just like his owner. He enjoyed the sushi. 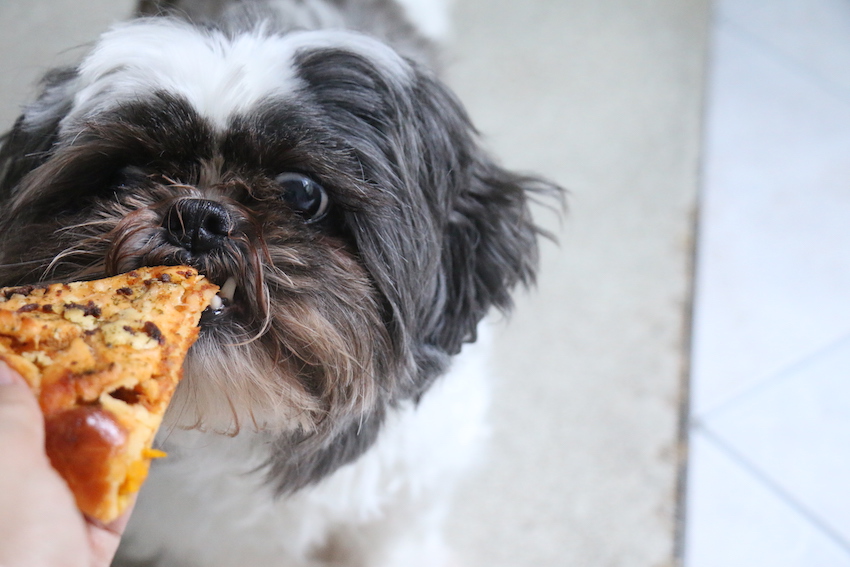 Smell: Disappointed by the lack of discernible smell, which is half the joy of a usual meat-lover’s pizza.

Taste: Meat-lover’s?! There was only chicken breast on that piece and maybe a sprinkle of beef mince. Robbery! The “dough” also made me appreciate the very glorious mineral salt so, so much. Miss ya, love ya, wish you were here.

Canine-approved?: Sniffed it grudgingly, and looked at me like I could do better. But ate it all in the end. That’s right, you beautiful dumb dog.

Texture: Squishy, like canned tuna. But it had intermittent bites of crunch from the capsicum, which was great.

Taste: This ill-advised social experiment just proves our human flavours and spices are wasted on dogs, and me feeding Oreo my leftovers from dinner must be the equivalent of someone raised on meat and two veg discovering Chinese food for the first time. Culture shock at every mealtime, poor baby. Anyway, it tastes fine, like nearly everything else I tried – dry chicken and sweet kūmara.

Canine-approved? Licked all the kūmara from the plate, which is a true testament.

Smell: I nuked this baby in the microwave and it smelt just like regular old salmon. In the face of everything else – heavenly.

Taste: I would not be fazed if I consumed this exact flavour in some small-town lunch bar, maybe through a really bland seafood pie, because the fishy salmon, even sans seasoning, really carries it. The kūmara pleasantly sweetens the salmon, actually.

Canine-approved? I just knew this would be Oreo’s favourite, because it has salmon and that shit’s expensive. He was so excited. Started licking it straight from my hand and wolfed it down no problem.

Smell: Someone call the Colonel, because this actually smells like KFC once it’s been warmed up. A goddamn poultry miracle.

Texture: Dry chicken breast that’s been cooked so long in the oven, the chook died twice.

Tastes: However, oven-baked chicken breast, straight from the freezer, reminds me of when I was seven years old and would come home from school only to have Mum whip out the bag of Tegel’s frozen chicken nuggets. Back then I would have to absolutely douse it all in salt, so the two are practically the same. These are just chicken tenders! Serve this at a children’s birthday party at Chipmunks and I would be none the wiser.

Canine-approved? Oreo sniffed at this very suspiciously and even ran away from it at first, but happily downed it once I cut it up and let him inspect the insides.

Two things. One: Singing happy birthday to my dog while he licks at his very own chicken cake gave me a lot of serotonin (made me happy). Gourmet pet food seems to be for the happiness of humans more so than the happiness of dogs, which is good, because humans have control over the money, and dogs don’t, unfortunately.

Two: There’s really no getting around that dog food is bland as hell, but apparently they like that, and it’s good for them. Leave the pupsticks to the dogs and buy your own KFC.