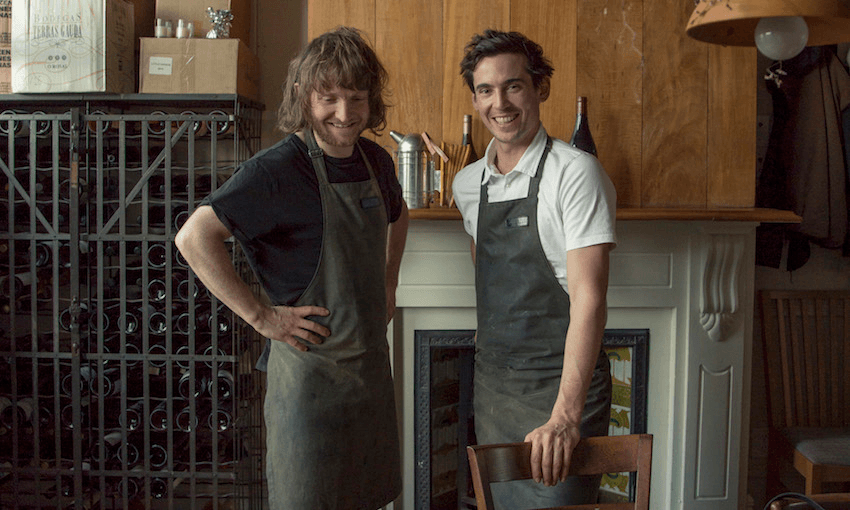 Zero waste, maximum taste: The restaurant with no rubbish bin

Meet the UK chef inspiring his Kiwi counterparts with a radical approach to food waste.

More accurately, the English chef binned the concept of the bin — there’s never been one at his restaurant, which opened four years ago in the heart of the famous seaside town.

That’s because Silo is a true zero-waste eatery. McMaster and his team source ingredients directly from growers, farmers, fishermen and hunters, cutting out the middle men and with them, the packaging.

“We’re going to the source, the absolute beginning of where food is born, and we are taking it from that source ourselves,” he explains.

They mill their own flour, churn their own butter, roll their own oats and make their own almond milk. It’s nose to tail and root to tip, meaning every part of every animal is used, and the same philosophy is applied to plants. Furniture is made from upcycled materials, there’s a brewery on site and a compost machine turns all natural waste, including the likes of napkins, into up to 60kg of compost in 24 hours — which is then returned to the growers. “It’s a closed loop,” explains McMaster.

It’s no mean feat, and the 31-year-old jokes that running Silo has pushed him to “the very brink of sanity”. But “creatively speaking, it’s a riot. There’s so much subject matter to get excited about.”

McMaster was in Auckland recently as a guest of Orphans Kitchen, where he cooked a special menu on two consecutive nights as part of the Ponsonby eatery’s fifth birthday celebrations.

Among the nine courses diners ate were spotted gurnard with nasturtium and horokaka (a native coastal succulent also known as ice plant), and cauliflower with black garlic and buffalo curd. Every bit of the gurnard that wasn’t on the plate — the bones, the head and so on — went into an earlier course, a clear gurnard broth with incredible depth of flavour, while the whey left over from making the buffalo milk curd was used in a later dish of potato, grapefruit and buckwheat.

It’s about maximising resources, says McMaster. “Every whole ingredient is synchronised into one menu in a way that’s diverse and exciting.”

“I think what Doug has set out to do and accomplished is really transparent,” says Hishon. “I’d never tasted his food before but because of that transparency, there was a certainty it was going to be delicious.

“There’s something really naked about both of our food — that’s what we have in common.”

There was a connection beyond Instagram — Veronica Bartleet, former restaurant manager at Silo, now works at Orphans Kitchen.

“We’re similar dudes,” says McMaster of Hishon. “We’re both quite passionate about doing the right thing and not compromising. Tom reached out and Veronica, who now works here, was my restaurant manager, and there was a big conversation between Veronica and Tom about Silo.

“It’s pleasantly surprising to see Tom pushing as hard as he is,” he adds. “Because it’s so difficult to do what he’s doing.”

Unlike Silo, Orphans Kitchen didn’t start out with a no-waste philosophy at its heart, says Hishon. “It’s been more of an evolution from seeing the waste that comes through the door and trying to minimalise that.

“We compost all the plant matter we don’t use at [the restaurant’s sister bakery] Daily Bread, and we work with suppliers to remove as much packaging as possible.” In addition, leftover oil from the deep-fryer is saved up in 40-gallon drums and used to power Hishon’s Land Rover.

Creating New Zealand versions of Silo signature dishes was a pleasure, says McMaster. “The produce you guys have is just phenomenal. I can’t believe it’s winter! We don’t have that abundance, that diversity.”

He visited the Orphans Kitchen plot at the Kelmarna community gardens in Herne Bay, where much of the produce used in the restaurant comes from, “and it was like a plethora of food opportunities”. McMaster was pleased to find Alexanders (smyrnium olusatrum), an ancient flowering plant that commonly grows wild throughout Europe, which he used in an appetiser course. It’s about the only thing that grows in England in the depths of winter, he says.

“If you went to a farm in England in the middle of winter, there’s nothing. We live and die by what grows on the farm — that’s our only lifeline. We don’t have a guy we can call to get something in from France. So we have to get creative.”

Silo started its life in Melbourne as a collaboration between McMaster and Dutch artist and eco-activist Joost Bakker, a temporary restaurant that ran for a year before the chef decided to take it home to the UK.

McMaster earlier worked at Fergus Henderson’s much-loved London restaurant St. John, famous for championing the nose-to-tail philosophy; he says it was a formative period. He didn’t do well at school (he’s pretty sure he’s dyslexic) and then became a “rubbish chef” and “continued to feel worthless”.

While working at St. John in 2009, he entered BBC Young Chef of the Year on a whim and, to his surprise, won. “It was that moment — ‘Oh, I’m not rubbish, I’m not worthless, I’m quite good at cooking now.’ St. John was a big part of that.”

There was something missing, though. “Like an emptiness,” he says. “I guess the feeling of wanting to apply being good at something to something that means something, to something with value, and I didn’t know what that was.”

He went travelling and met Bakker in Australia, who gave him the idea of starting a zero-waste restaurant. “That day was just like, ‘Ah, this is what I’m going to do with my life — I’m not going to have a bin. And I don’t want it to be just about not having a bin — that’s just the catalyst, the thing that sparks all the other wonderful, creative, meaningful value in what I do.”

Silo Brighton opened in 2014 and in 2016, was named best ethical restaurant in the Observer Food Monthly Awards.

Two years on, McMaster is still constantly working to reduce the restaurant’s tiny waste output even further. He says wine bottles are the only real option if Silo is to have a decent selection of natural wine, and these are currently being recycled — better than going to landfill, of course, but still not ideal.

“I wanted to do better. Every single material that comes into Silo, we take it upon ourselves to manage and close that loop. Glass was the missing link — that was the only thing coming in that went to recycling. It wasn’t enough.”

It was bothering him, so the chef recently partnered with potter Mark Ciavola to crowdfund a machine that crushes glass to sand and another that grinds the sand to powder. The powder can then be mixed with water to make an emulsion that Ciavola will cast like porcelain.

They successfully raised £7000 (more than NZ$12,000), plenty for an Expleco glass crusher — manufactured, as fate would have it, in New Zealand — as well as the other machine, with a few grand left over for product development and the purchase of wine barrels (to lessen their need for glass bottles at all).

“As a restaurant owner it will take years before we have too much crockery,” McMaster says. “When we’re done making crockery, we’ll make tiles and tile the bathroom, then we’ll make something else. It will mean we do not recycle anything. For me, that’s like I can retire now.”

Before he does that, he’s got a book to finish, however. Silo: The Zero Waste Blueprint, which will be published later in the year by Leaping Hare Press, is aimed at showing other hospitality businesses how they can adopt aspects of the Silo no-waste model.

Next year, Silo will follow Orphans Kitchen in celebrating five years in business — and McMaster hopes Hishon will reciprocate by coming to Brighton to join him in the kitchen.