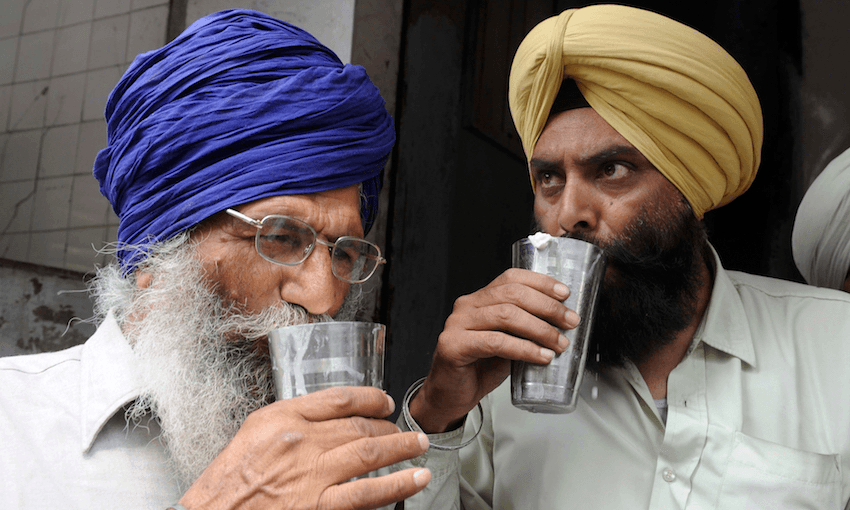 Punjab is basically the Taranaki of India

Ardent carnivores may struggle in Amritsar, the second biggest city in Punjab state, India. In the bright sandstone main square, signs at the doors of Maccas and Subway declare them strictly vegetarian eateries, and most restaurant menus are meat-free. We didn’t notice any butcher’s shops in this place of pilgrimage for Sikhs, but the streets are lined with lassi vendors and ice cream spruikers, purveyors of pulse-based curries made silky with cream, plush breads glistening with butter, and paneer skewers deliciously charred in tandoors. Docile cows roam freely — technically state-owned bovines, they’re offered the first chapati of the day by local families and scoff food scraps from public bins. Punjab is a place where dairy rules, and we felt right at home.

I have a lot of time for milk and all its delicious offshoots. My partner Jack is a Taranaki farm boy whose parents always comment that we are “doing our bit to support Fonterra farmers” when they see the contents of our fridge. Cheese is at the bottom of my personal food pyramid — an ‘eat most’ food. We buy silver-top milk and scrap over who gets the cream off the top of the bottle. Jack and I plan our road trips north to visit his family around when the Fonterra cheese factory shop in Eltham, South Taranaki, is open. Its fickle hours are its only downside, and well made up for by the $2 wheels of Kāpiti Kikorangi and giant misshapen lumps of parmesan that cost a fiver and fill our fridge and freezer.

When we read about the food of Punjab state — heavy on the tandoor, heavy on the bread, heavy on the cream — we were keen. I kicked a strong bout of Delhi belly that had followed me from its eponymous city through North India just in time to indulge. Punjab has the highest rate of dairy consumption in India, a fact that’s unsurprising to me when I retrospectively analyse our Amritsari diet.

Our first meal in the city sounded unchallenging: famous Amritsari kulcha, a stuffed bread similar to naan but with a layer of fillings like spiced potato or minced cauliflower. I chose the paneer filling, and it came out on a thali plate with chickpea curry and a dollop of vinegary onion pickle. Sitting on the bread was a gigantic, ominous lump of fridge-cold butter, just starting to melt into the surface. After swirling around for full saturation, we tore into our breads and immediately realised we might not be cut out for the Punjabi life. The butter plus paneer plus rich curry was a lot to deal with.

The lassi did not help — not recognisable as the same product as a mango one from your local Indian takeaway, it was strong and tangy and sort of farmy, unflavoured but slightly sweetened. After it’s churned by hand from fresh curd, the lassi is topped with a dollop of butter and extra cream to create a dairy ménage à trois. Jack couldn’t handle the taste — it reminded him of barrels of colostrum kept in the dairy sheds back home on the farm.

Near Amritsar’s famous and incredibly photogenic Golden Temple, touts aggressively sell their kulfi, sticks of an Indian ice cream that is much denser and sweeter than the likes of Tip Top vanilla. The pyramid popsicles have that caramelised note like canned condensed milk, and come studded with pistachios, crushed almonds or dried fruit. I sat in the shade one afternoon eating kulfi in the square when, without warning, a woman popped her bonny toddler on my lap. He immediately started screaming as she took a photo. I wish I’d asked her to send me a copy.

At a restaurant that specialised in convincing tandoori fake meat, the roti rolls that come in pairs contained an honest to god ingot of paneer each. Despite always complaining that there’s never enough paneer in Indian food at home, this was just too much. At Kesar Da Dhaba, a famous backstreet curry house that’s been slinging thali for 102 years, my dal makhani (here’s a hint: ‘makhani’ means ‘with butter’) tipped me over the edge. I became convinced that I could smell butter everywhere, that I was actually starting to sweat butter.

After four days, I was craving lettuce. We gave up and got Subway.