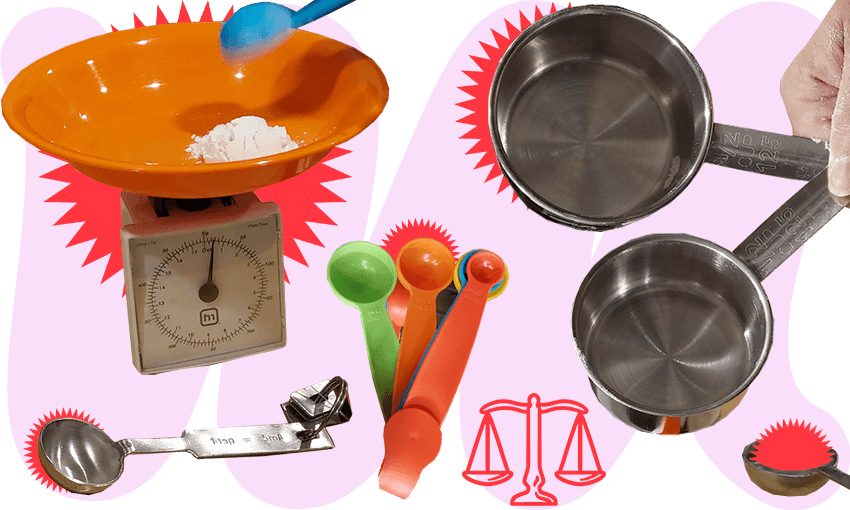 Can you really trust your measuring spoons?

By Tulia Thompson
Guest writer
Made possible by

Are you actually bad at baking, or are your utensils just letting you down? Tulia Thompson investigates.

Last week a tweet was published that struck fear into the hearts of New Zealand’s home bakers. It claimed – with photographic evidence – that Countdown’s 5ml / 1tsp measure in fact only held a measly 3ml. Rumours of other inaccurate supermarket-bought measuring utensils soon began to filter through the grapevine.

Clearly somebody needed to do something about it. I decided to launch an investigation into the measuring equipment on sale at our three largest supermarket chains.

Like many quests for justice, mine was partly fuelled by childhood angst. When I was a kid my mum used a large, ceramic mug as an all-in-one measure for her baking. She thought it worked. It did not. When I grew up and remade her recipes, they were unrecognisable.

Using wrong amounts when you’re baking, I figured, is like exploring without a compass: you might enjoy the scenery, but you probably won’t end up where you’re meant to be going. My home economics teacher instilled in me the firm belief that baking is chemistry, and depends on correct ratios. By comparing different supermarket brands I hoped to reveal the truth so that everyone could enjoy perfectly-made homemade hot cross buns over Easter weekend.

My new favourite supermarket, Pak’nSave Mount Albert, got things off to an inauspicious start by being out of measuring cups. Undeterred, I bought a 5-piece set of Pams plastic multicoloured measuring spoons for $2.79. New World Mount Roskill had the same Pams plastic measuring spoons, but for 20 cents more – New Zealand’s supermarket duopoly was showing its true colours. Countdown St Lukes had both plastic and metal Food Guru brand – the metal measuring spoons were $5.

On the metal measuring cups I bought from Countdown, I noticed both the cup and the half-cup said “1 cup, 250 mLs”. Interesting. Could a similarly mislabelled spoon have been to blame?

Measuring one teaspoon of flour on my kitchen scales was not super useful – the hand on the scale-face barely moved because it was in 5-gram increments. The random kitchen scales I inherited and which have sat dejected at the back of the cupboard for years were providing too rough a gauge for the precision teaspoon game.

I also had no way of knowing which of the three measuring cups or teaspoons was the most correct. I was merely dipping my fingers into the unknowable mysteries of the universe. Who measures the measurers?

I regretted smugly ignoring my sixth form physics teacher when she told me I would need physics someday.

My search for answers led me to Tamsyn Clemerson, a keen home baker from Wellington and the source of the original tweet about the 5ml measuring spoon that only held 3ml. The Khandallah resident, who often bakes school lunchbox snacks for her six-year-old, immediately set me straight on one fact: the measuring spoons were actually from New World, not Countdown.

Her mum had previously used the same New World measuring spoon to measure rennet when making mozzarella, which subsequently failed, meaning four litres of milk went to waste. Clemerson was worried that other people might also have incorrect measuring spoons: “I kept thinking what if people are splashing out on ingredients to bake a cake and then the cake fails?”

With the knowledge that the measuring cups held different amounts, and spurred on by Clemerson’s mum’s mozzarella mishap, I wanted to know whether small differences in quantities would affect hot cross buns.

“It’s not the end of the world,” said food writer Julie Biuso, who assured me my hot cross buns would be fine whichever measure I used. The highly regarded baker has written several cookbooks, most recently Shared Kitchen, which she co-wrote with her daughter Ilaria. Biuso said more precise measurements are needed for some ingredients like pungent spices, chilli and baking soda, but otherwise a bit of variance is OK. Her website has a useful guide to measurements and conversions.

Biuso told me she uses metal measuring cups and spoons from a kitchen store. “They are always going to be level, they’re not going to buckle [and] you’re not going to put them in the dishwasher and have them get all twisted and out of shape.”

But some in the food industry say it’s time for measuring cups and spoons to go. Celia Hay, director of the New Zealand School of Food and Wine, said measuring with cups and spoons is both inaccurate and old-fashioned. “People just need to change and forget about spoons,” she told me.

When training people for commercial kitchens, Hay’s school uses digital scales and measures everything in grams. She recommends buying digital scales, which are sensitive enough to measure small amounts, and using recipes that have the amounts in grams.

Despite the knowledge that measuring spoons are increasingly arbitrary, I still wanted to know which of my supermarket spoons were accurate. So I went home to repeat Clemerson’s teaspoon measuring experiment, using a small syringe bought at the chemist. I lined up my Countdown, Pak’nSave and New World measuring spoons, and measured 5ml of water into each one.

The room fell silent with anticipation. I could hear the buzz of the fridge and the distant chirping of crickets. I was about to uncover the truth.

The 5ml fit into each spoon precisely – there was no discernable difference.

Tulia Thompson is a cadet in the Next Page cadetship programme, public interest journalism funded through NZ On Air. She will be working with The Spinoff for four weeks before working with Metro, North & South, New Zealand Geographic and Pantograph Punch.