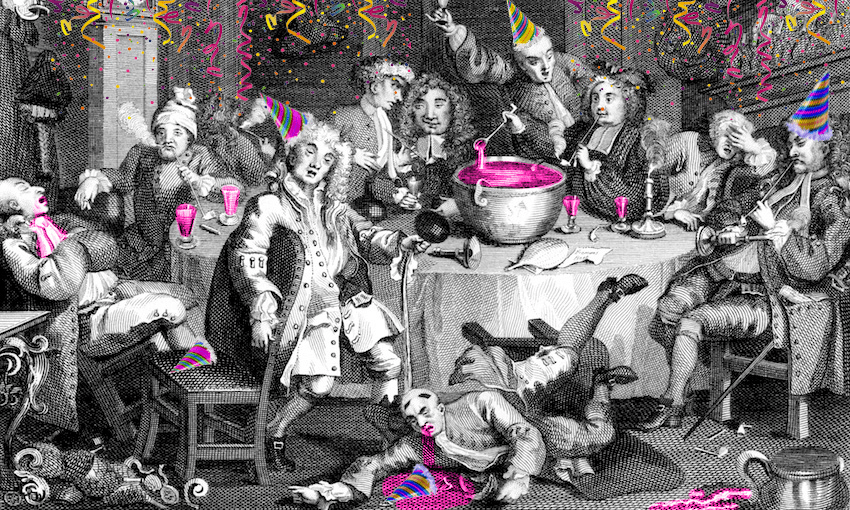 Punch was big on the 18th-century party scene, to which this painting by Hogarth (embellished by The Spinoff’s Tina Tiller) attests (ORIGINAL IMAGE: GETTY IMAGES)

Why punch is illegal in New Zealand (kind of)

Punch was big on the 18th-century party scene, to which this painting by Hogarth (embellished by The Spinoff’s Tina Tiller) attests (ORIGINAL IMAGE: GETTY IMAGES)

In the best drinking cities in the world, sharing a punch bowl with your mates at a bar makes for a splendid evening. To have a similar experience here, you’ll have to stay home.

This is a sample of responses from Spinoff team members to being asked what came to mind when they thought of punch.

These answers, clearly, are all kinds of wrong, but they’re also pretty much right.

The first written records of punch appear in the 1600s, making it probably the world’s oldest cocktail. It was created, as many good things are, by throwing a bunch of stuff together and hoping it tasted good (and that it would induce drunkenness, presumably).

“The origins of punch were about trying to create something you’re used to,” explains Wellington bartender and punch enthusiast Peter Lowry.

“European sailors would find themselves in India or further east, and when they ran out of wine and beer they were left with arrack — a very strong spirit — or something like it.

“In creating punch, they were trying to create something that would taste like wine or beer. They would water it down and add flavourings in the form of bitters and lemon juice.”

Punch made it back to the old world courtesy of those sailors, who found the drink’s citrus content helped ward off scurvy on the journey home. It quickly became de rigueur in places like London, both with the sailors and their working-class peers — it wasn’t taxed, so was a lot cheaper than beer or wine — as well as the posh people.

“It was seen as slightly exotic and exciting, and the upper classes who were throwing large parties would have ornate punch bowls made,” says Lowry.

The operations manager for Wellington bars The Library, Forresters Lane, Chow and Le Samourai began seeing punch in a new light thanks to American drinks historian David Wondrich, whose 2010 book Punch is credited with spearheading the drink’s rehabilitation.

“For me it was going down the rabbit hole a little bit,” says Lowry. “My views on punch were that bowl of floating fruit at a bad party. When you’re proven to be completely wrong, it piques your attention.”

Discovering and exploring historic drinks has been a big trend in the cocktail world in recent years, and punch, with its fascinating story, infinite versatility and inclusive nature, has become popular overseas, particularly on the east coast of the United States.

There’s been a move away from the waistcoated, moustachioed speakeasy-style bartender, a trend that was proving to be “more excluding than exclusive”, says Lowry, a Belfast native who worked in the US and Canada before moving to New Zealand nine years ago.

“They needed to bring in ways of welcoming people, being friendly and inclusive but still being fun, cool and a little bit over the top, and punch is a great realm for that.”

A group of friends sitting around a table at a bar sharing a great big bowl of punch is a uniquely convivial experience that can be compared to a family meal, says Lowry.

“There’s almost an element of sibling rivalry — is someone going to eat quickly and finish all those roast potatoes? You’ve always got one eye on that person who’s going to try to get a few more cups of punch in before it starts to run low.”

When he moved to Wellington in 2009, Lowry was surprised to find punch was nowhere to be seen. “The Wellington cocktail scene was so highly regarded, and so many good bartenders work here, so I just kind of expected punch to be a reasonably big thing because it was developing everywhere else.”

But thanks to section 254 of the Sale and Supply of Liquor Act 2012 — which states that spirits aren’t allowed to be served in vessels exceeding 500ml — we Kiwis are deprived of punch (not to mention jugs of margarita or proper sangria, which is made with brandy).

Lowry has looked into ways around the rule, such as splitting up the alcohol in the punch or having the punch bowl behind the bar and serving it to people individually, but it’s just not the same, he says.

“The whole joy of a punch is that it tastes one way and then it develops and changes over time as a little bit of ice melts and the drink softens. You get releases of aromas and flavours that you wouldn’t have had before.

“The law really baffles me — at Chow I’ve got a sangria on that was developed to be made for a larger number of people, but we have to do individual portions because it contains a brandy. But I’ve embraced all the other aspects of Wellington being friggin’ awesome, so I can handle one silly little law.”

That one silly little law doesn’t, of course, stop you from serving a lovely big bowl of punch in your own home.

Lowry is organising an event as part of next month’s Visa Wellington on a Plate that will arm guests with the means to do just that. The team from Forresters Lane (which used to be Motel) is joining forces with Joseph Slater from Six Barrel Soda for We Cordially Invite you to Party!, which is all about the art of the welcoming drink.

One theory behind punch’s name is that it comes from the Sanskrit word for five, because the original drink may have had five ingredients, but David Wondrich reckons it’s more likely an abbreviation of “puncheon”, a barrel that held spirits.

Either way, the “rule of five” is a good place to start when making punch, says Lowry, meaning something strong, something weak, something sour, something sweet, and some spice.

He shares some tips and a recipe with The Spinoff here. “If you follow the basic rules, you’ll create something delicious.”

The Spinoff’s Beverage content is brought to you by Fine Wine Delivery Co. They’re completely and utterly devoted to good taste, whether it’s wine, food, craft beer, whisky, rum… They firmly believe that eating and drinking well is an essential part of a life well lived, and that it’s possible on almost any budget. You just have to know where to look. Their website is a great place to start or come into either of their purple Auckland SuperStores at 42 Lunn Ave, Mt Wellington, or 60 Constellation Drive, North Shore.