A new initiative is taking on food insecurity and food wastage by encouraging diners to take uneaten food home. And, as chefs taking part of the scheme explain, what you do with those leftovers needn’t be limited to a quick blat in the microwave.

It’s hard to know just how much food our local cafes and restaurants waste, but it’s estimated New Zealand’s hospitality industry creates around 24,366 tonnes of food waste each year, most of which is avoidable. That comes at a huge environmental and social cost.

While we’re wasting masses of food across the country, the Salvation Army distributed more than 113,000 food parcels last year – the highest number in the 14 years of its yearly report, which in 2020 suggested food insecurity was on the rise in Aotearoa, as did other charities.

Ozone is one of more than 40 restaurants across the country to sign up to a new fundraising scheme by not-for-profit pay-as-you-feel dining initiative Everybody Eats, which encourages diners to ask for takeaway boxes for leftover meals and donate $5 in the process. The special boxes, called “Goodie Boxes”, allow diners to make an instant donation to Everybody Eats via Apple or Google Pay. It’s an attempt to make a firm link between food wastage and food insecurity in Aotearoa – two birds with one stone, if you will; save the leftovers on your plate from ending up in landfill and help someone access a delicious meal. The Goodie Box initiative has been taken up by more than 40 restaurants and cafes across the country (Photo: Supplied)

Reducing food waste is one of the driving forces of the menu at Ozone, which has locations in Auckland and New Plymouth, so it’s a natural fit for the brunch spot to take part in the initiative, says O’Connell. “As people who use a much, much, much higher volume than your average consumer, it’s our responsibility to respect that food, keep it out of the bin and use it as much as possible.”

He’s excited about the prospect of the food boxes: “I’d say it’s a conversation starter for sure, and the option to pay it forward is great as well.”

While the cafe’s portions are designed to avoid leftovers in the first place, if customers find themselves with any, Ozone wants to encourage them to take them home in a Goodie Box – which, with its bold design, quite literally brightens up the somewhat grim connotations of the doggy bag. 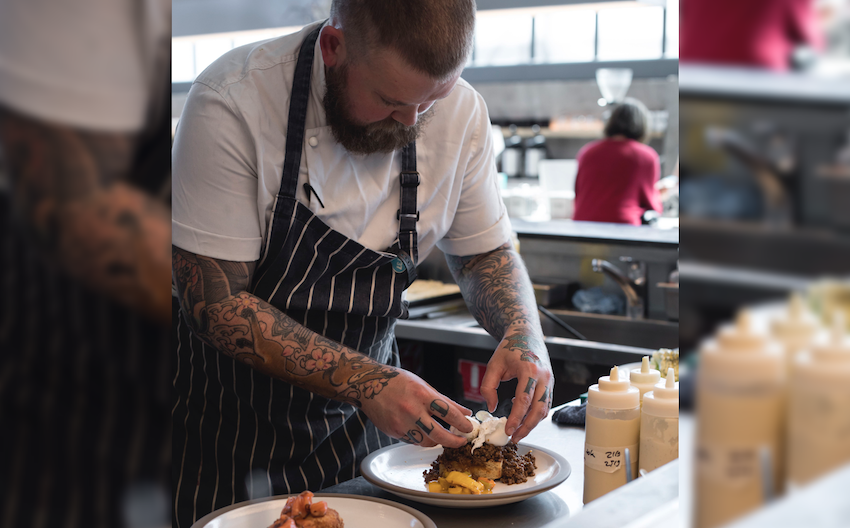 O’Connell’s ethos when it comes to using leftovers is simple: “You want it to be quick and easy.” His favourite method for repurposing leftovers from his menu is to turn those bits and pieces into bruschetta. Take a chunky hunk of sourdough rubbed with olive oil and garlic. Then, tumble over whatever you have leftover from their menu: it could be the smoked kahawai, a couple of spoonfuls of mince or a few florets of barbecued broccoli and chilli. “That’s honestly the best thing,” he says.

Then there’s the smoked fish kedgeree, which O’Connell reckons would work particularly well as an upcycled leftover meal. Top it with a fried egg, some sriracha and some mayo and you’ve got dinner for one the next day. You’ll find the boxes at Oikos Hellenic Cuisine in Wellington too. Theo Papouis, the restaurant’s chef and owner, says it’s not uncommon for people to take food from his restaurant home. “Because of the style of food, it’s quite easy to eat at home.”

He’s excited that the boxes further normalise taking home leftovers, and encourage his customers to feel confident in asking for a takeaway box. “The fact that it prompts you to help out someone in need is even better,” he adds.

If you are lucky enough to have leftover slow-cooked lamb from Oikos, Papouis suggests: “Just heat it up, toss in some canned tomatoes or tomato paste and cooking liquid and then you’ve basically got a beautiful ragu for a pasta – easy.” It’s tried and tested too. “I do that myself if I have that leftover from the restaurant.”

Then there’s the chicken kalamaki; grilled chicken skewers with garlic, paprika and wild oregano. If you’ve got a couple of those as leftovers, they’re perfect for lunch the next day. Simply take them off the skewer, fill some pita breads or make a wrap. “There’s always something you can do with things. Don’t just throw stuff away,” he says. Working in the hospitality industry means some waste is unfortunately inevitable, but Davies believes businesses can do more to avoid this. “If you’re conscious of it and you try to make use of every part of the plant or animal you’re using, you can do your bit throughout the kitchen and then through to the guest,” he says.

Once the food is served, it’s mostly out of their control whether it’s wasted or not. But, Davies says, “if people have leftovers, then taking it home is the best thing they can do”.

How can customers repurpose leftovers from his vege and fish-focused restaurant? Davies suggests chopping leftover veges and tossing through salads with grains to “liven them up”. It’s a simple shortcut that can add a surprising amount of flair to your weeknight green salad.

The grilled cheese toastie provides another vessel for leftovers, he says – just pop whatever you’ve got between a couple of slabs of bread with cheese. The crispy eggplant with butter vindaloo sauce off Gatherings’ current menu would work particularly well in a toastie. “You get all the goodness of the night before but you’re not just eating exactly the same thing reheated.”

The challenge of avoiding food waste provides a creative challenge for chefs the world over, says Joe O’Connell. Being able to turn offcuts of meat, imperfect vegetables and stale bread into tasty kai has long been a badge of honour for cooks. “You have to be strategic, you’ve got to plan that out, you have to be really thoughtful. “And,” he adds, “it has to be delicious.”

So there you have it: dealing with leftovers isn’t limited to zapping them in the microwave or eating them cold out of the box on your work lunch break (though there’s nothing inherently wrong with either of those options, of course).