Stuck in level four, Aucklanders are smashing deep-fried dough balls into their faces like never before. Chris Schulz tries to get his hands on one.

When Daniel Black begins listing flavours of his filled doughnuts, I tell him to shut up. He doesn’t listen. “We do a Belgian chocolate mousse and a raspberry cheesecake,” says Black. “There’s vanilla bean custard. We do a crême brulée one which has a caramelised crunchy sugar coating.”

When I start laughing maniacally, Black says something that nearly tips me over the edge: “There’s passionfruit curd which comes with a toasted marshmallow meringue on top.” It sounds so good, yet each of those words feels like a fist landing square on my face.

That’s because Black’s doughnuts are incredibly difficult to get. From their Henderson base, Daniel and his partner Annie offer a rotating menu of 70 different flavours, all fresh, hand-made and preservative-free. Since they began offering deliveries a week into level four, they’ve sold out every single time.

Bored of lockdown, stuck at home, unable to get takeaways and sick of eating their own bad baking, Aucklanders are smashing their way through deep-fried, cream-filled, home-delivered balls of dough like never before. “It’s the ultimate comfort food,” says Black. “They’re desperate for it.” 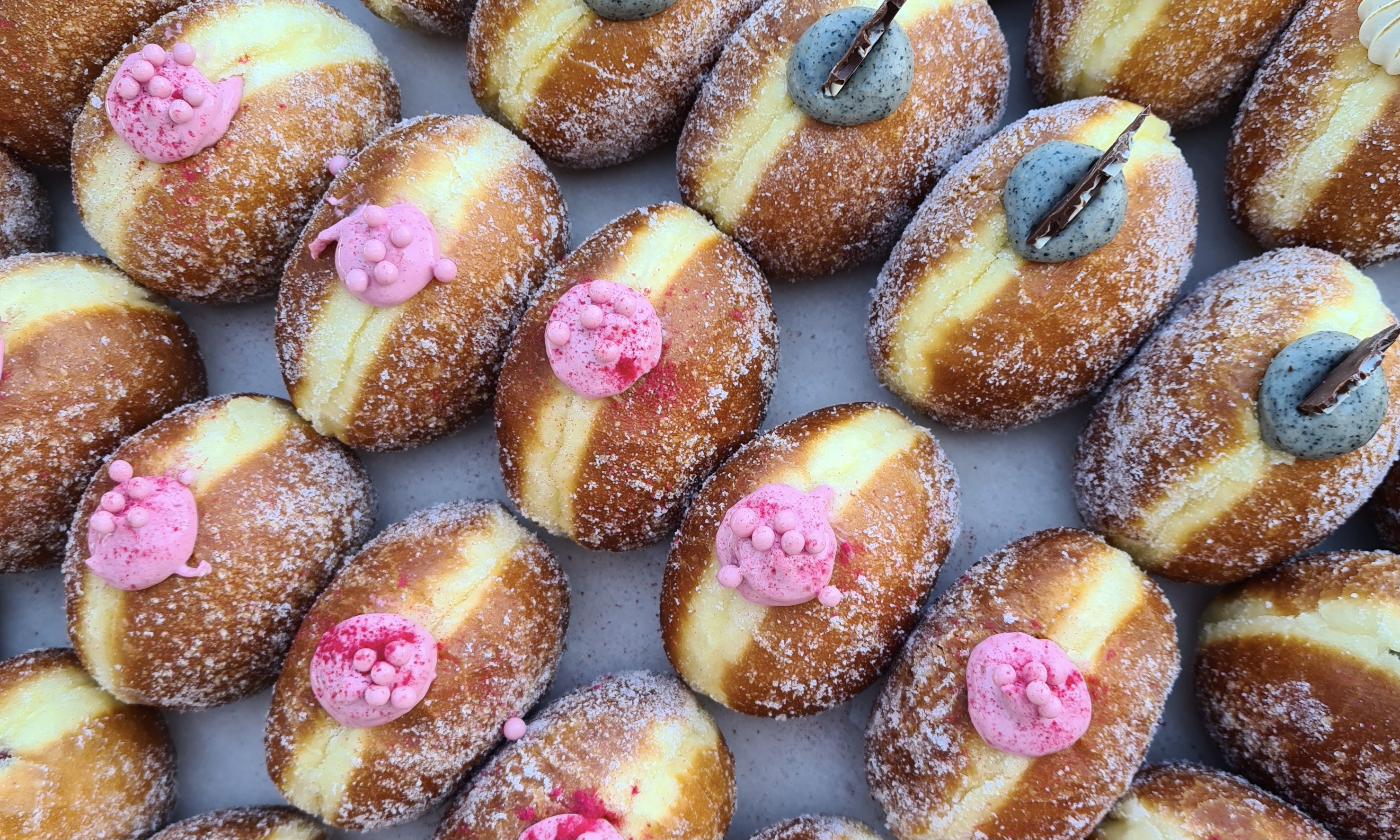 Black has clear proof of this. Whenever he opens up Grownup Donuts’ website for orders, they sell out in minutes. Some order a dozen at a time; others are corporate orders wanting to treat staff working from home. They’re at capacity: bakers arrive at 3am to begin putting together up to 200 orders containing 1,500 doughnuts, and drivers show up at sunrise to start delivering them.

They’ve hired extra help, rented more vans, and transport their delicious sweet treats as far as Silverdale and Takanini. “It is a bit of a logistical challenge,” says Black, who says they’re sticking to alert level rules by keeping teams distanced and in bubbles. “We are very busy.” About the only spot Grown Up Donuts hasn’t delivered to, it sounds like, is my place.

They’re maxed out, and they’re not the only ones. For Father’s Day recently, Isabel Pasch’s Bread & Butter Bakery in Grey Lynn offered a limited edition doughnut pack of hazelnut chocolate praline, and salted caramel pear and mascarpone. They came in boxes of four that cost $30 each. She had room to make 100 of them.

“We put them up on our online store on Wednesday morning and they were all gone by Wednesday afternoon,” says Pasch. Plenty of people missed out and they didn’t mind being vocal about it. “We got absolutely bombarded by people going, ‘Argh! Why can’t I order the doughnut box?’”

Because of that demand, Pasch has offered her doughnut boxes every weekend since, and they keep selling out. This weekend’s flavours are passionfruit meringue and blueberry mascarpone. When I checked her online store, she’d written this message: “Doughnut boxes will continue as long as we are locked up. What else is there to look forward to?”

Pasch thinks they could easily sell more, but they don’t have the bench space or staffing numbers to do it. As it is, a team of three bakers arrives at 2am so deliveries can begin at 7am. “There seems to be a lot of doughnut hunger out there,” she says.

Why the sudden rush? “They just want something fancy to treat themselves and something that will kick the endorphins up a notch,” says Pasch. “There’s not much of that going on at the moment.” She believes doughnuts can affect people in other ways. “Maybe it’s a good mental health thing that we need to keep going.” 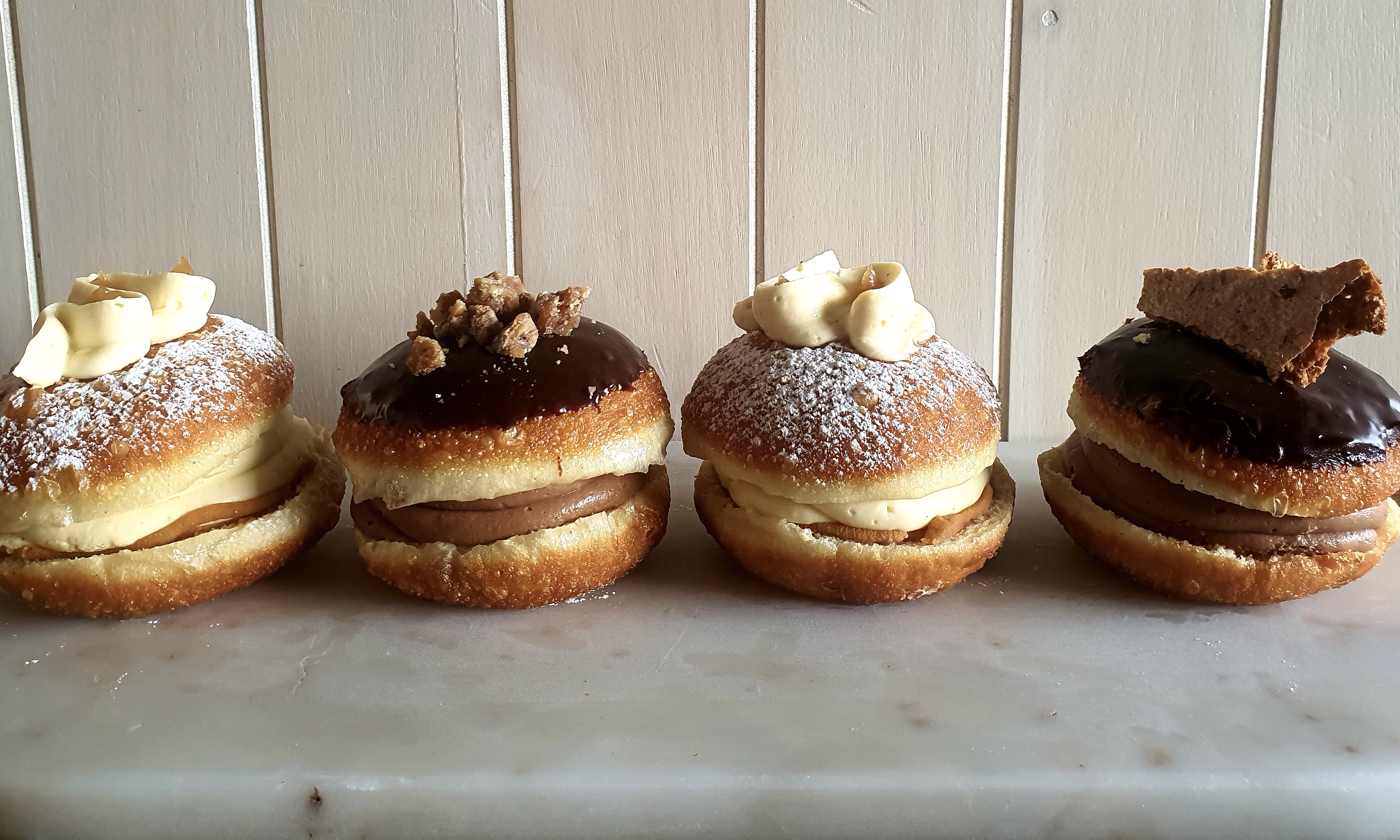 Black agrees. Despite their lack of availability putting me in a dark frame of mind, he believes a doughnut stuffed full of Belgian chocolate mousse is a mood-shifter. “There are people in self-isolation. They’re worried and stressed about Covid-19 and whether or not they might have it (and) they get a box of doughnuts waiting for them at the door,” he says.

“That’s a bright spot on their day. We’ve had so many messages saying, ‘They’re the highlight of our day, week or even month.’”

When the country first went into lockdown, Grace Tauber and Shenine Dube, the owners of Grey Lynn’s small pink doughnut shop Doe, decided to take orders for just one day a week. “We were hesitant. There was a lot of uncertainty,” says Dube. “We wanted to be cautious.”

Sitting at home, hotspotting data from her phone to counter the dodgy wifi, Dube opened Doe’s website up for orders. Nestled between a battery shop and a panelbeaters, Doe is just a small operation with a staff of four. Sticking to alert level rules, they can cook and deliver a maximum of 500 doughnuts a day.

Within 20 minutes, they’d sold out. “We had 500 people on our website at one time trying to order, trying to check out,” she says. “It was such a mess.” Dube tried to close the website off, but her data had run out. Orders kept flooding in. “I could not shut it off,” she says.

They’d learnt a hard lesson. “That day we had to do way more (doughnuts) than we were supposed to do.” 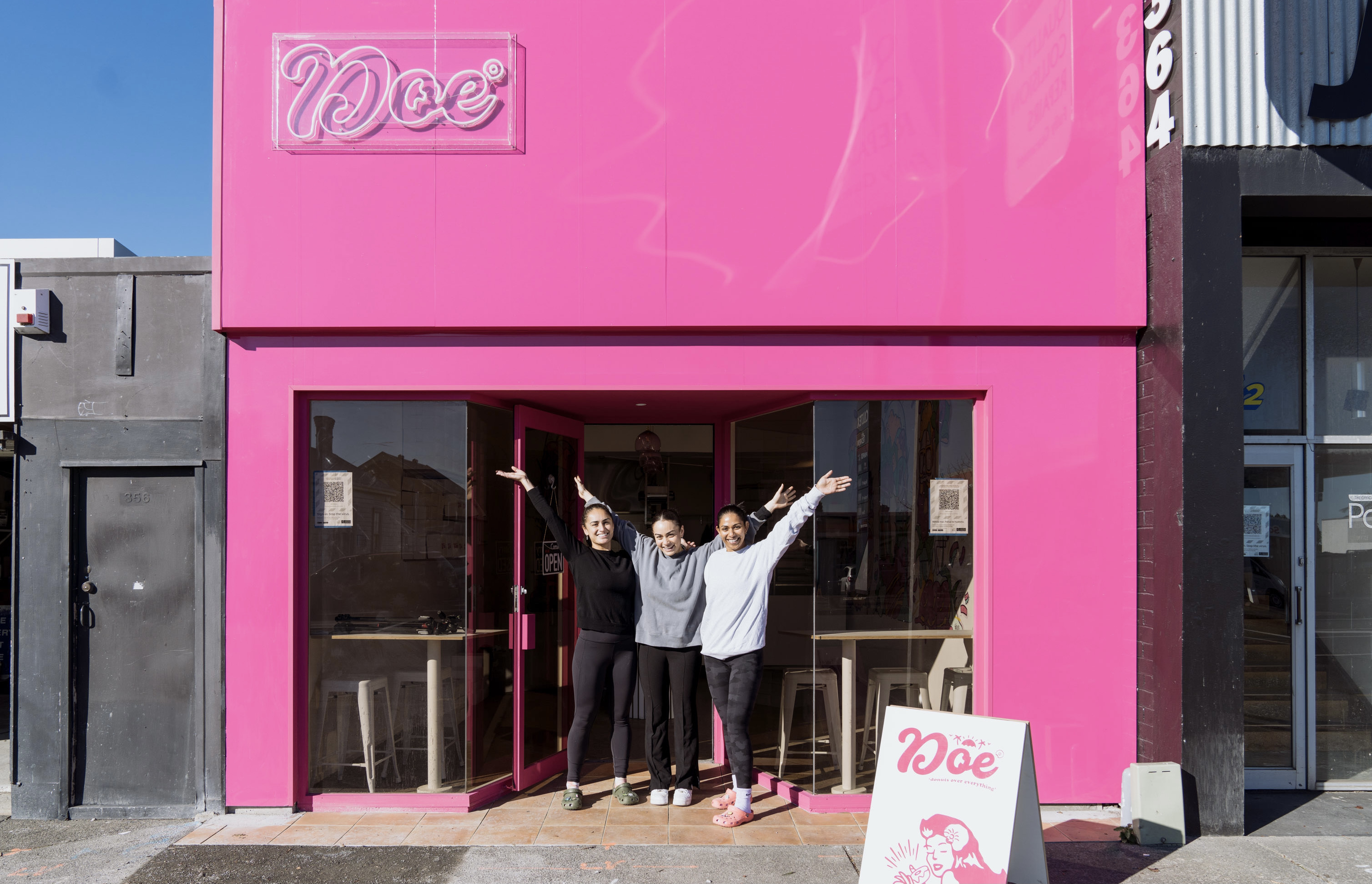 The small team at Grey Lynn’s Doe often sell out of their Pacific-infused doughnuts in minutes (Photo: Supplied)

Doe’s founders are now open three days a week delivering their Pacific Island-infused take on doughnuts, with flavours like pineapple pie, peaches and cream and Caramilk among their most popular. They’re in the kitchen by 6am, and when they get home in the evening, there’s paperwork to do, emails to sort, and messages to respond to.

Even with Auckland’s alert levels set to change, there appears to be no end in sight for the doughnut frenzy. It’s something the duo behind Doe are banking on. “Sometimes I get scared to say it out loud because it happened with cupcakes – it was such a big thing and no one really hears about them any more,” says Tauber. “But … there are so many different flavours that you can create with doughnuts. I feel like people really will always love them.”

Can’t they just sneak an extra order in for me? Erm, no. They’ve stopped telling people when their website will be open for business, and refuse pleading messages like mine that land via Instagram and Facebook. Like spots in New Zealand’s MIQ facilities, to get your hands on Doe doughnuts you just have to keep hitting refresh.

My search for lockdown doughnuts will have to wait for another day. “There are no secret orders unless you’re family or friends,” confirms Dube. She feels bad turning customers away, but they just can’t take their orders. They’re simply too busy. “We do want to take a million orders. We just physically can’t do it.”