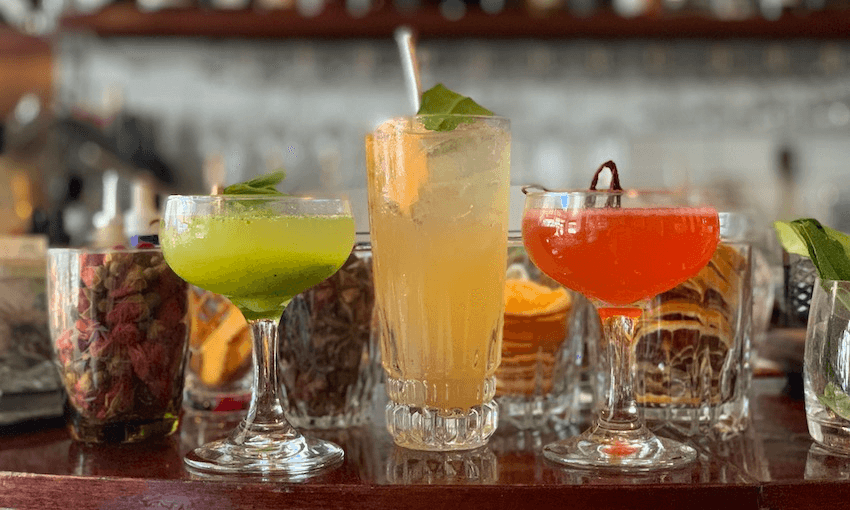 In high spirits: Three cocktails from the Highball booze fest

Wellington’s always been a good booze town. These days it’s all about the craft beer and natural wine, of course, but years before hazy IPAs and pét-nats were de rigueur, there were cocktails.

I spent my formative boozin’ years in the capital, when the Matterhorn was at its peak, when Lord of the Rings stars hung out at Motel but I was too intimidated to go there, when Havana and the Hawthorn Lounge opened, followed eventually by Mighty Mighty, which, it soon became clear, was the best bar there ever was and ever will be.

And I discovered cocktails. It started slowly – I still remember being absolutely roasted by a cooler friend for ordering a cosmopolitan at Chow when I was about 19 – but I soon trained my palate to enjoy the bold flavours of negronis and old-fashioneds and the like.

I left Wellington but the cocktail scene continued to flourish without me. There’s now The Library, CGR Merchant & Co, Crumpet, Forresters Lane, to name just a few, and some world-class cocktail makers have made the city their home.

So it was only natural that one day, a celebration of all things cocktails would come to the capital. Highball, held at the Embassy Theatre last weekend, is the new offering from the Wellington Culinary Events Trust, which brings us Visa Wellington on a Plate and Beervana each year. They know their stuff, then, and the inaugural festival was a grand old time. Here’s a slightly blurry narrative of how it went down, anchored around three memorable cocktails.

The national drink of Trinidad, no less! The Queen’s Park Swizzle was among my first drinks of the evening (yes, we may have been presented with several at the same time on arrival) and it sticks in my mind mainly because it resembled a traffic light, that staple of birthday parties at Cobb & Co and Valentines. My QPS was made by Ray Letoa, a bit of a Wellington ledge – he won a bunch of bartending awards with Coco at the Roxy, and is now the global brand ambassador for Angostura, which, as I learnt, makes delicious rum as well as the bitters it’s more famous for.

Anyway, the drink is named after the Trinidadian hotel where it was invented in the 1920s, and is basically mint, lime (that’s the green), rum, sugar syrup (orange-ish) and bitters (red-ish) over heaps of crushed ice, and ’twas delicious. My friend Sarah and I sampled a couple of other cocktails at the Angostura too – one called a Miramar fizz, which had dry ice in and was therefore awesome, and an Angostura 1919 daiquiri, which tasted damn good.

Next we ascended the grand marble stairs (great venue, that Embassy) for a whisky-blending session with Johnnie Walker (SO MANY WHISKIES, SO LITTLE TIME), then grabbed a haloumi sandwich and headed into a lecture theatre. It’s a bit weird going to learn stuff when you’re half-cut, but I’m a professional so I managed to pay attention and actually absorb quite a bit of what American cocktail historian Philip Greene had to say about Ernest Hemingway.

I read a bunch of old mate Hem’s works in my youth and enjoyed them, but as my bitter, cynical feminist soul hardened with age I came to scoff at all the dude bros who idolised him (it’s a red flag, ladies, trust me on this one). Needless to say I headed into the lecture with my guard up slightly, but y’know, it was Saturday night, I’d consumed a lot of liquor and you have to admit, the dude lived an interesting life. Plus he had good taste in cocktails.

Greene, whose day job is something fancy and law-related at the Pentagon (he lived in Wellington and lectured at Vic law school for a while, funnily enough), has written a few books on cocktails, including a Hemingway-focused one, and co-founded the Museum of the American Cocktail in New Orleans. So he knows what he’s talking about. The best part was as we were enlightened about Hemingway’s favourite cocktails, we got to drink some too! First up was his special version of the daiquiri, created for him sans sugar by La Floridita bar in Cuba (he was diabetic). We soon moved on to the Green Isaac’s Special, named after a little Bahamian island of which Hemingway was fond and featuring gin, fresh coconut water, lime and Angostura bitters. It appeared in his novel Islands in the Streams and unsurprisingly, it was damn tasty too.

Newly erudite and increasingly, er, cheerful, we headed into the theatre itself where there was music and merriment and more booze, of course, to talk sustainability with Dan Felsing of Crumpet. The bar industry is a bit of a waste nightmare, but there are increasing efforts to improve things. At the charmingly named Crumpet, next to the Opera House foyer on Manners St, they do their darnedest not to waste anything: Felsing served me a Pressed Daisy, a drink that featured hazelnut orgeat, a syrup made from hazelnuts leftover from Crumpet’s house-made hazelnut liqueur. After they’ve flavoured the orgeat, the nuts get a third and final use in a pecan and hazelnut butter that goes on the food menu. Yum. The drink also had apple brandy and maple and pine cider made by Steel Press, a side venture of Crumpet bartender Sean Manning, and was tart and appley and refreshing and delicious.

What happened next? We had some more food (burnt coconut and mushroom curry with fresh Asian herbs and rice, and chilled soba noodle salad with honey truffle ponzu and house-smoked fish by Hot Sauce, very nice thank you), then I might have had half a negroni, then I went home, sated but a little disappointed that I did not have the capacity to drink more cocktails.