Messing too much with summer berries is sacrilege, but this heavenly light sponge provides a fine vehicle for the most luxe of fruits.

In this time of misinformation and alternative truths, I’m going to lay some refreshingly stone-cold facts on you. The greatest summer food is a berry.

I mean don’t get me wrong, banana milkshakes in a cardboard cup from the dairy and cold sausage sandwiches are right up there at this dazzling time of year, and if anyone wants to post me a kilo of cherries I would be your best friend, but berries better them all. Portable, yummy, healthful, a couple of punnets are always welcome if you’re going to one of the many, many BYO-potluck-smart casual-BBQ-thingies people unimaginatively hold in December. I’m not going to play favourites either – strawberries, raspberries, blackberries, boysenberries and blueberries are all grown locally in my area and they’re all ripe now – but not for long. So get in! And whatever you do, for the love of jellytips don’t cook them. Chuck them in the freezer if you can’t eat them all at once. Bottling fruit or making jam in summer is nothing more than a tyrannical domestic drudge, luring you into spending the very best of New Zealand’s golden weather inside, wilting over a hot boiling pan of steamy fruit and sugar for hours, listening to your neighbours having a way better day shrieking about in their above-ground pool. It’s too damn hot in this country for that kind of foolishness. It’s also completely pointless as berries are blissful without boiling the crap out of them and all raspberry jam from a jar tastes pretty much the same anyway. Berries don’t need extra messing with. They should really be eaten fresh and al fresco, which is Italian for “with a swiftness/whilst on a sun lounger/out of the navel of a bronzed surfer with a wolfish grin”, depending on the regional dialect.

If you really, really must provide a vehicle for these luxe fruits, a sponge cake is the answer. Making a heavenly light and butter-free sponge is not maybe as traditional as you think. My grandmother’s version of this dessert was to happily buy a bright yellow rubbery cake in a cellophane wrapper from the local grocers and slap half a cubic foot of artificially flavoured strawberry buttercream icing directly on the top. I don’t know where she got that sickly sweet – and delicious – idea from but to be fair, Gran didn’t have an electric egg-beater for much of her life. The thought of whipping both egg whites and then cream for a “proper” sponge cake by hand is something she probably quite rightly scorned as a waste of time she could have better spent chain smoking Camels and reading The Tablet. But we have it so much easier now with our electric gadgetry. There’s nothing at all difficult about making a classic sponge cake when you live in the literal future.

I’ve had this sponge recipe all my life, and it probably originally came from Tui Flower or Alison Holst, those mighty queens of 1970s Kiwi cooking. I don’t know. But it is the best I’ve ever found for reliably producing that old-fashioned light, dry taste and texture. It’s also a perfect sponge base for making trifle, that sublime cold dessert without which your Christmas will be a travesty. So that will be handy.

My hatred of hot kitchens and the slavery of summer cooking is such that I have risked an all-out feud with my mother-in-law because a) I am very brave and b) I have banned the use of the oven in my house at all on Christmas Day. But I will make an exception for cooking this sponge a few days ahead – I’ve tried using plain bought sponge or those expensive Italian rusks and neither of them hold custard quite as well. A few teaspoons of sherry and a layer of cold custard on top of each sponge before you add cream and berries and lo! A trifle is born. First of all – and this is important – find yourself a helper. Give them a pair of scissors and make them do the frankly boring as hell job of lining the base of your cake tin with paper (baking parchment, old butter wrappers, greased brown paper from shopping bags – whatever). Also, get them to whip the cream for later and take the tops off the strawberries. Whether you do this with threats or bribery is up to you – chef’s choice!

Now separate the eggs. There’s no non-disgusting way of doing this – you will be handling the ovate equivalent of snot here, so brace yourself. I find the least yolk breakage happens if you pour the entire contents of the eggshell into your hands and gently let the floopy sloop drip between your (clean, obvs) fingers into the mixing bowl. Oddly calming. Throw the naked yolks into a separate bowl for later. 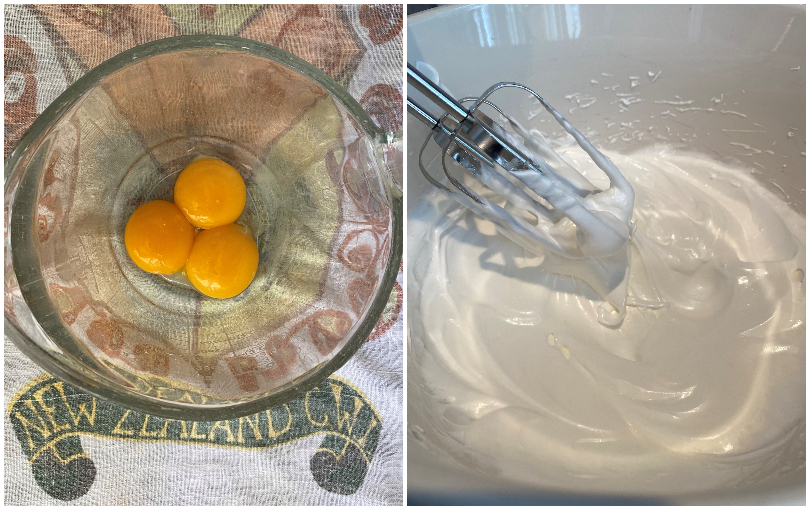 Yolks, and the stiffest of peaks (Photos: Amanda Thompson)

Go for a serious blat with your electric cake mixer in the egg whites. The whites need to look puffy and white before you add a third of your sugar; blat some more, then add the next third of sugar and so on. By the time you have finished you should have a bit of a sweat on your brow, the smell of hot metal in your nose and a bowl full of very stiff shiny peaks.

Pour the egg yolks into the bowl and mix on low speed for about 5 seconds – until only just mixed in.

Get rid of your wonderful electric beater at this point, it can’t help you any more. Now, you need to fold in the flour/cornflour/baking powder mix and you should probably sift it first. I’m not really one for finicking about with dry goods but in this case it does make a difference. Just use any old sieve. Fold the dry ingredients in gently and respectfully – knocking all the air out of the beaten eggs at this point would be a tragic turn of events. The resulting cake batter will be stiffer and dryer than you are used to but don’t panic, bung it straight in the oven at 190C for 15-20 minutes. You’ll know it’s cooked when you gently touch the centre of your golden sponge and it doesn’t wibble wobble. Folding in the dry ingredients, and fresh out of the oven (Photos: Amanda Thompson

When the sponge is cool and turned out, split it in half horizontally with a bread knife. No matter what they might do on those stressful cooking competitions, never let neatness or accuracy bother you when you are doing this. Be confident and hack away. Gently spread a generous wodge of jam on the bottom layer, and sprinkle a few prepped berries around. Top with half the whipped cream. Put the lid on, then the rest of the cream and berries.

Make your helper do the dishes. Enjoy.