Miss Torta in central Auckland is putting the spotlight on a snack that’s commonplace in Mexico, but until now relatively unknown in New Zealand.

You’ve heard of a torta, but what is it, exactly? Well, depending on the cuisine it can mean a flatbread, cake, tart, sweet pie, savoury pie or an omelette. In Mexico, though, it’s a sandwich.

A new shop focusing on the Mexican torta has just opened in downtown Auckland. Owner Manuel Moreno Gonzalez is originally from Mexico City but has lived in New Zealand for the last 10 years. He worked in restaurants in Christchurch and Auckland before in June last year opening his own joint, Mr Taco, a spot that quickly amassed a loyal following and made it onto Metro Magazine’s Cheap Eats list for 2020. I’ve even heard that a Mexican customer cried while eating there because the tacos were that good.

Nestled between what is surely the oldest Mexican restaurant in Auckland, Mexican Cafe, and Gonzalez’s original outlet, is his new shop, Miss Torta. He’d been looking for a spot with more room for customers to dine in, and having it two doors down from his other restaurant makes running two places at once a lot more manageable.

The shop had a soft opening  just before New Year’s, but opened officially last week. Gonzalez’ aim is to show us another side to Mexican food – pushing beyond New Zealand’s focus on tacos, nachos, churros and burritos when it comes to the cuisine of his homeland. He’s doing so by focusing on Mexican breakfasts and of course tortas, the shop’s namesake. While tortas occasionally turn up on some Mexican restaurants’ menus, slotted in with the entrees, and there have been a couple of pop-up sellers of the sandwich in the past, Gonzalez and I agree that this must be the first permanent shop dedicated to the torta in New Zealand

They’re as integral to Mexican street food these days as the taco, but the history of the torta is pretty unclear.

While corn was the staple food for indigenous Mexicans, wheat was introduced by Spanish colonists and the consumption of bread (an essential torta ingredient) grew post-colonisation. By the early 17th century, there were 13 bakeries in Mexico City. It’s been speculated that a precursor to the torta was developed around this time.

Another possibility is that the torta is of French influence. The French occupation of Mexico only lasted from 1862-1867, but their influence over Mexican cuisine continued decades after their defeat. Exactly when and how the torta came to be is still a mystery. Really the only thing that’s certain is that by the mid-20th century, the sandwich was firmly cemented in Mexican food and culture. 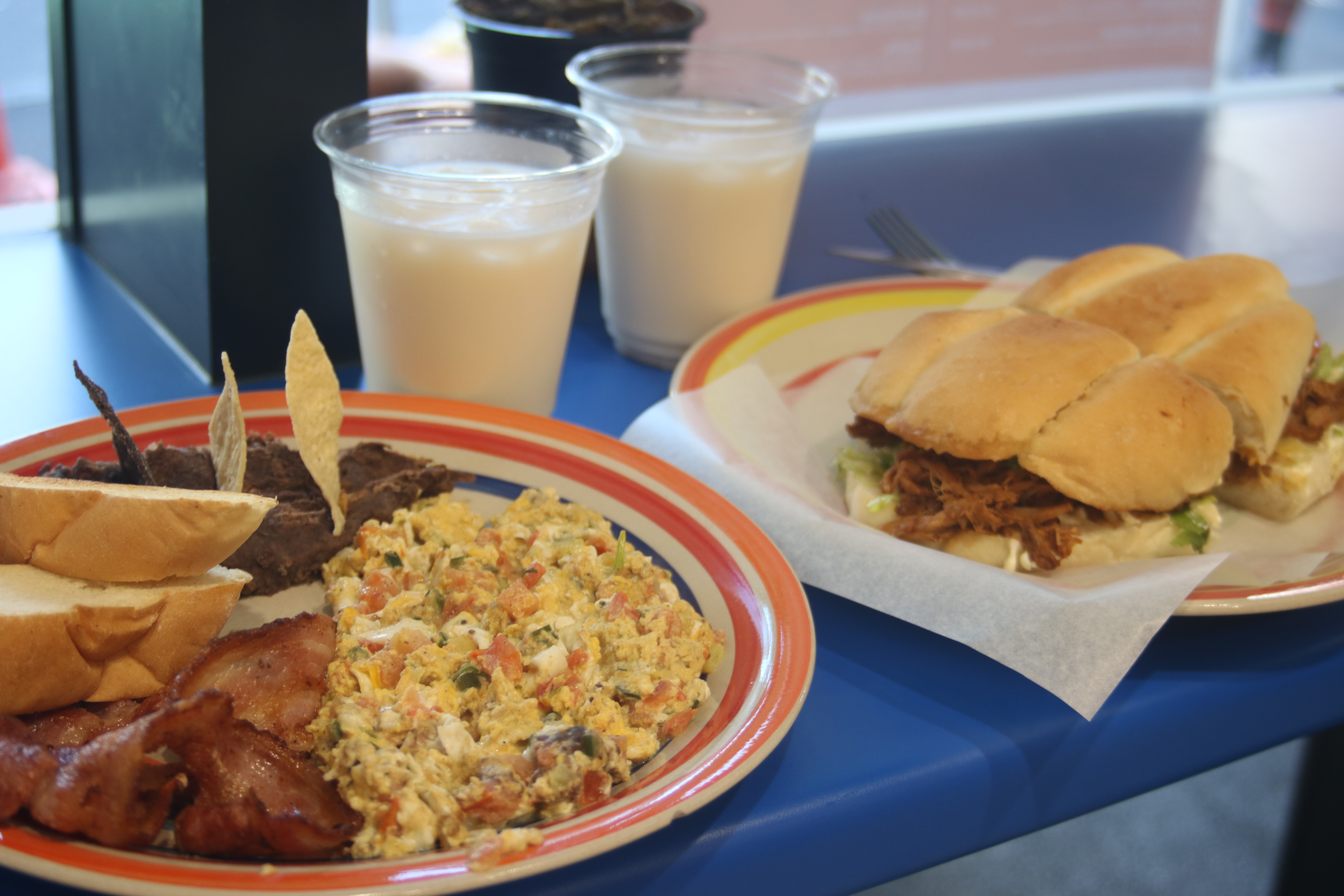 We visited Miss Torta a few days after New Year’s on one of those it’s-so-humid-I’m-literally-stuck-to-my-seat type Auckland days. Without any real shopfront advertising, little precedent for most locals to know what a torta is and most people still seemingly out of Auckland on holiday, the shop was still abuzz with happy customers and interested passersby. We ordered the Pierna Adobada torta ($16) which was filled with slow-cooked pork marinated in adobo sauce – a widely used Mexican sauce spiked with ancho chillies, vinegar and garlic – and, as is standard with all the tortas on the menu, tomato, lettuce, onion, avocado and jalapeño. All of this was housed between two halves of a pillowy telera bread roll with its characteristic double slit. Telera bread is the bread traditionally used for torta. It’s essential. So essential that because no one sells telera bread in New Zealand, Gonzalez worked with a local baker to replicate it. He says it took them multiple attempts to get the bread as soft as it needs to be – but they got there in the end.

Miss Torta also serves up huevos a la Mexicana – eggs scrambled with tomato and capsicum, refried beans, bacon and slices of the fluffy telera bread. At $12, it’s a bargain if you ask me. Iced horchata ($5) – a sweet rice milk that was ladelled into our cups from a big glass jar on the counter – was lightly spiced with cinnamon and a welcome relief from the heat.

As we left, Gonzalez said we had to try the Milanesa torta next time we stopped by – that’s a torta filled with crunchy breaded and fried beef cutlet. It wasn’t in stock on the day we visited because they were yet to receive their beef order, but I know what I’ll be ordering next time.

The location of the spot seems kind of poetic in its proximity to Mexican Cafe (a place where I,  like many Aucklanders, had my first taste of Mexican food). It feels symbolic of the development of the cuisine in New Zealand, which is seeing a shift from Tex-Mex offerings from non-Mexican owners to a slowly growing number of authentic Mexican outlets under Mexican ownership. In a world of travel restrictions making it difficult to travel to new places and try new foods – or, for many, to visit home and eat the foods they love – authentic and varied food joints are of newfound importance. Thanks to Manuel Moreno Gonzales and Mr Taco and Miss Torta, any Aucklander can visit Mexico this weekend, if only over lunch break.

Miss Torta is open from 10am-8pm Monday-Saturday and from 10am-5pm on Sunday.