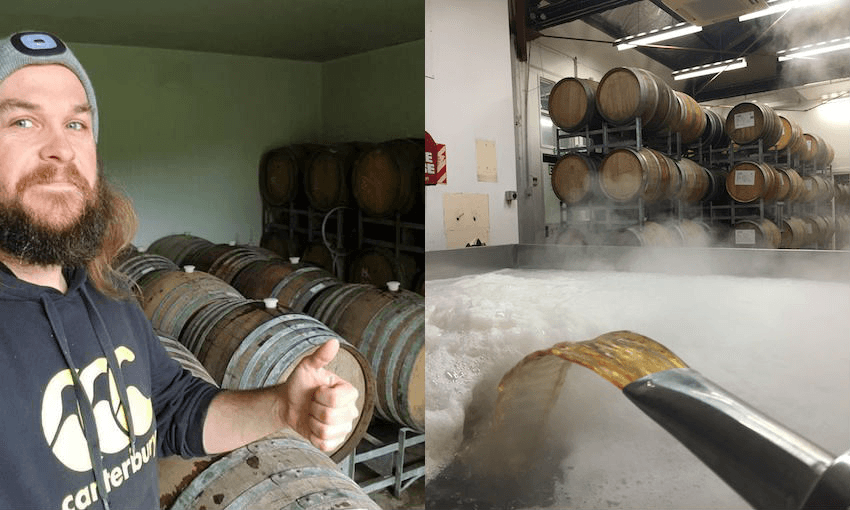 Brayden Rawlinson of Ninebarnyardowls, and the coolship being filled at Garage Project’s Wild Workshop (Photos: Supplied)

Out of the wild brew yonder: Why weird beers are the new normal

Brayden Rawlinson of Ninebarnyardowls, and the coolship being filled at Garage Project’s Wild Workshop (Photos: Supplied)

Did you know that all kinds of weird and wonderful shit floats about in the night sky, and you can make beer with it?

If you’re into wine, you’ll probably be familiar with the idea of terroir — the way a Central Otago pinot noir tastes different to a Martinborough one, for example.

It’s all about how the physical aspects of a particular region — the soil, the climate, the terrain —affect the taste of the grape that ends up in your glass.

Terroir has not been traditionally associated with that other popular bevvy, the humble beer. But it’s an apt way to describe the unique aspects of brews made by wild or spontaneous fermentation — the age-old lambic style perfected in Belgium that’s experiencing a renaissance both here in New Zealand and abroad.

At Garage Project’s Wild Workshop in Marion St, downtown Wellington, the brewers have been experimenting with spontaneously fermented beers and wines for a couple of years. Only recently, however, have they installed a 3000-litre coolship (sometimes spelt the Flemish way, koelschip), which is a large, shallow vessel that looks a bit like a big stainless steel bath.

If you’re brewing a regular beer, the hot wort (basically the first iteration of the beer, before it’s been fermented) needs to be cooled down as quickly as possible before the yeast is pitched so no nasties have the chance to find a home in that nice warm liquid.

With spontaneously fermented beers, however, the hot wort is transferred to the coolship, which is traditionally outdoors, and left to cool down overnight. Instead of yeast being pitched (that just means sprinkled over), wild yeast from the air is allowed to accumulate on the surface of the wort and inoculate it — so you’re encouraging exactly what you’re trying to prevent in regular brewing. The process can be done only on the coldest nights of the year, to minimise the possibility of undesirable yeast strains and airborne pollen getting into the wort.

At the Wild Workshop, the Garage Project team has positioned their coolship by big windows that can be opened wide to allow the Wellington air to come in and do its thing — whatever that may be.

“You never know,” explains Ruffell. “It’s a combination of what’s in the atmosphere and what’s ingrained in the building. If you go to some of the great Belgian producers, the building almost smells like their beer. It’s quite amazing.”

Next year the team plans to move the coolship up to the loft and install roof panels that can be opened and closed.

After its night in the coolship, the wort is transferred to barrels, where it stays for several years developing complexity, before beer from different barrels is blended and bottled. Garage Project uses a range of wine barrels, plus massive foeders that once held cognac and a few big terracotta amphorae.

“These beers take several years to come to fruition, so there’s no real hurry,” says Ruffell. “It’s like the slow food equivalent in brewing.

“It’s ultimately working towards showing what unique New Zealand terroir has to offer.”

Garage Project was looking for a site in Martinborough in the Wairarapa for its Wild Workshop initially, but soon realised the commute from Wellington would be too much of a hassle.

“Then we sort of realised that Garage Project is an urban brewery, and Cantillon, one of my top breweries of all time, is based in the heart of Brussels. We realised this needed to be an urban project as well, so we turned our attention to the city and found the site.”

But another wild fermentation beer project, albeit on a much smaller scale, is in full swing in the Wairarapa countryside. Brayden Rawlinson recently started as the head brewer at Tuatara, but his side project is Ninebarnyardowls, based at his parents’ farm in Gladstone, half an hour north of Martinborough.

The name is an anagram of his own name, but Rawlinson encourages a commonly held belief that he’s a big fan of the nocturnal bird. “People think I have this weird infatuation with owls, it’s fucking hilarious. I’ve kind of just gone with it.”

The moniker is apt, however, because barnyard flavours are a big aspect of his beers. “And I’ve got chronic insomnia so I’m up all night like an owl, so it kind of all fits.”

Rawlinson is a winemaker turned brewer and the farm is an ex-vineyard. Last year, he managed to convince his dad to give up his shed — which used to house the vineyard equipment, meaning it’s already a hot bed for all kinds of yeast — for his son’s brewing experiments.

But it was no ordinary beer that Rawlinson wanted to make.

“I constructed a 100mm-insulated room to maintain a constant temperature and got 15 barrels from where I’d worked as a winemaker. Ingrained in the barrels is the terroir of Gladstone — the grapes, the yeast, the brettanomyces,” he explains.

Rawlinson convinced Martinborough Brewery to let him brew wort there and worked with a Masterton-based engineer to build a 1800-litre coolship. The hot wort is transferred from the brewery back to the farm, where it’s put in the coolship. He did three batches over three nights in late July-early August last year, which filled 15 barrels.

A portion of the grain used in Rawlinson’s beer was grown on the farm, and the water came from a bore there. “Within five years I want to source 100% of the ingredients for my beer from within the 2km radius of the farm,” he says. “I’m trying to encapsulate in a bottle a part of the world that I love so much. This beer is not going to be able to be replicated.”

The beer stayed in the barrels for just over a year, before different blends were bottled with the addition of sugar and champagne yeast to make them re-ferment and get nice and bubbly.

“Every single barrel was different,” he says. “One smelt like fermenting pineapple, one smelt like feijoa, one smelt like oxidised oranges, a couple smelt like almonds. They’re all influenced by what was in the barrel before and the yeast that was used for those wines. Last year I used 12 pinot noir barrels, two merlot barrels and one pinot gris barrel.”

Of the blends we tried during the interview, one had vinous characters, was highly carbonated and very dry, while another was smoky, with a slight barnyard character caused by the presence of brettanomyces. For the uninitiated, these beers can be challenging. “They’re weird, they’re funky, they’re very polarising,” admits Rawlinson. But if you go in open-minded, they’re delicious — expect something closer to a wine or a cider than a hoppy IPA.

Rawlinson did it all over again this winter, so the shed is now filled with a whole lot more barrels slowly doing their thing. He released a few kegs of the first batch but now he’s working at Tuatara, it’s a conflict of interest for him to sell his beer — something he’s fine with.

“I can perfect a blend but it’s still years before it’s released, so I have time up my sleeve. At this stage it’s just a very involved hobby.”

He has, however, sent 100 litres of his first batch to his friends at Craftwork Brewery in Oamaru, who make similar Belgian-inspired beers, and will soon visit them to make a blend.

The next plan is to go back to his winemaking roots and make grape beers. Rawlinson has 13 Montepulciano vines on the farm, plus access to other varieties through his winemaking contacts, and plans to plant more, with the aim being to make single-grape lambics by combining different grapes with different beer blends.

“I was a winemaker who become a brewer when I realised I could produce beer in two weeks rather than waiting eight nine months for a good wine,” he says. “I started off with conventional beers and have come full circle back to beers that are more closely associated with wines.”

If this all sounds a bit niche, keep in mind that lambic beers have experienced a huge surge in popularity. “In the 80s and 90s they were incredibly unpopular — you couldn’t give them away for love or money, says Ruffell. “But now they’re the most sought after beer in the world — they trade hands for huge mark-ups on their purchase prices.”

This can be attributed in part to the return to favour of everything handmade and heritage, he says. “Like traditions with cheesemaking and charcuterie, it really went out of fashion for a while and came roaring back.”

It’s also a style that appeals to brewers who are a sick of the dominance of hoppy beers. “The craft beer industry is so saturated with hop-forward styles that it’s time for another aspect of brewing to take the limelight,” says Rawlinson.

Brewing a beer that’s so unique, and so reflective of place, is also a huge drawcard, he adds. “It’s cool to be able to say I made this but I didn’t really make it, I just put it in the right place.”