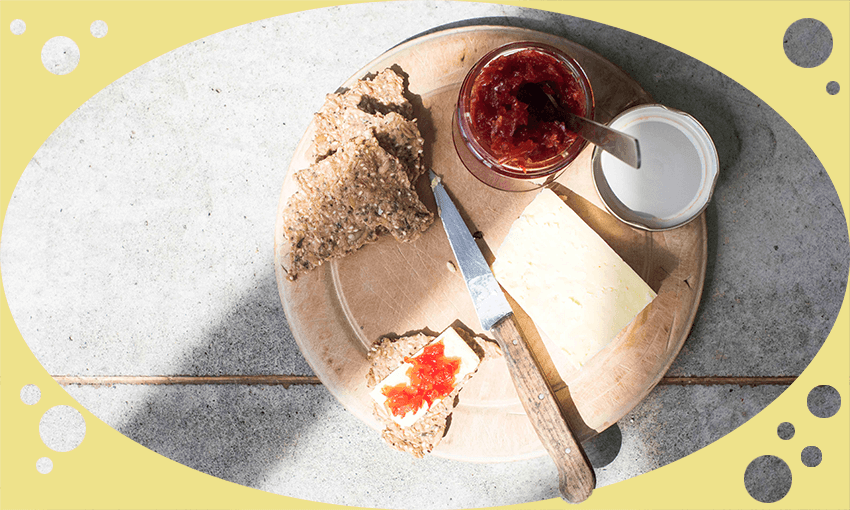 Preserve the last of those late summer veges with this simple jam that’s a perfect match with cheese and crackers.

I’m lucky enough to have a greenhouse which means that, seeing as I live on the side of Taranaki Maunga where our summer growing season is a short one, I can now grow heat-loving vegetables such as chillies, capsicums and eggplants. As summer veges come to an end I have been blessed with a bumper crop of red capsicums, and what better way to use them than turn them into delicious, sweet, sour red capsicum and chilli jam – delicious with cheese or served alongside fritters. It’s mild in heat (I used the long, slender chillies you commonly find at the supermarket) so if you like it a little hotter, once you’ve processed the chillies, add some seeds back in for extra heat.

Preheat the oven to 100°C. Wash four small jars (I always do an extra jar or so just in case!) and put them into the oven to sterilise while you make the jam. They only need to sterilise for 30 minutes but I often stick mine in when I begin making my preserves. Put the lids into a large Pyrex jug.

Halve the capsicums and remove the seeds. Roughly chop then put into a food processor and pulse until finely chopped up but not pureed. Transfer to a large saucepan or preserving pan.

Halve the chillies and deseed those before pulsing them in the food processor until finely chopped. Add to the pan.

Peel and roughly chop the onions before also pulsing them until finely chopped. Add to the pot along with the sugar, vinegar and salt.

Bring to the boil then reduce the heat and simmer for about 1½ hours or until the liquid becomes syrupy. Pour boiling water over the jar lids then put the jam into the sterilised jars before screwing on the lids.