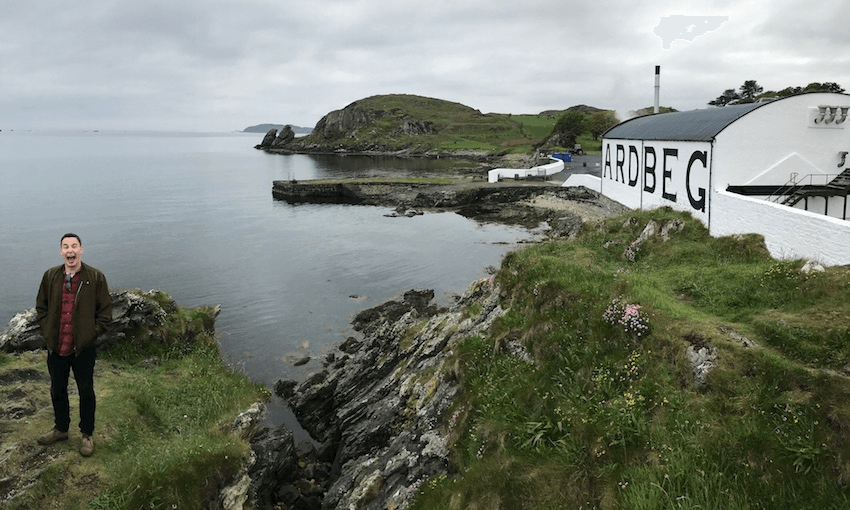 In Islay, no one can hear you scream (Photo: Jono Hutchison)

No mean peat: A refined trip through the birthplace of great whisky

In Islay, no one can hear you scream (Photo: Jono Hutchison)

Whisky was dribbling over the top of my glass and a large Scottish man was standing over me yelling, “Is that enough?”

He ignored my reply and kept pouring. Booze soaked my hands and pants. It fell onto the concrete floor and puddled around my shoes. The world spun slowly. “Drink up,” the Scotsman said. His name was Paul, and he was my new best friend.

About 15 hours earlier I’d arrived on Islay, an island near Ireland with a name that means ‘island’. The sparsely inhabited settlement in south-west Scotland is only a little more solid than the sea. Most of it is made of peat – a mossy substance halfway between mud and coal. There’s hardly any rock. The roads undulate over the peat swamps. But the bog is the island’s greatest asset: it’s the key ingredient in some of the world’s best whiskies.

Think of a smoky whisky; it probably comes from Islay: Laphroaig. Bowmore. Ardbeg. Bruichladdich. The small island’s eight working distilleries dry their malts over peat fires built out of cuttings from the nearby swamps. The fires give their spirit its trademark smokiness. I’d made plans to travel to the island after going through the insufferable and embarrassingly predictable process of developing a passion for whisky – and particularly peaty whisky – as a male in my early 30s. I got there on a sunny evening in early May, ready for a refined trip through the peaty kingdom. Less than a day later I was getting trashed with Paul in the cold basement of Lagavulin Distillery.

My public transformation from whisky connoisseur to hammered loudmouth began at 10.30am, when I was ushered with roughly 15 other people out of the Lagavulin gift shop and into the distillery’s warehouse for what they call a whisky ‘demonstration’. In reality the event was just drinking seven drams of whisky at breakfast time – a practice better known as ‘alcoholism’. Our demonstration was led by a tiny Scotsman called Iain MacArthur, a legendary Islay local who’s been making whisky for 47 years. There’s a video on YouTube about him from 2010. It captures his slices of wisdom, which include, “If you see around Islay, there is plenty peat and you’ll never run out of” on peat, and “tears were running out your eyes because of the midges” on midges.

But it was his assistant Paul who truly captured my heart. He hated me. For being a smart alec. For being a New Zealander. Most of all, for being an obvious idiot. Paul identified me early on in the demonstration as a potential target, pouring extra whisky into my glass and saying rude things about sheep and my admittedly horrible accent. We started with a six-year-old whisky. It was too young, Iain said. He was right. It tasted like gasoline. We drank it quickly. Next, a 13-year. Then a beautiful 15-year-old whisky. Two 19-year-olds. Paul ordered me to extract the 24-year-old whisky from the cask myself – a process that involved sucking a metal pipe until spirit rushed upward. I spat a cloud of booze in Paul’s direction. He poured roughly a cubic metre of the 60%-proof whisky into my glass in response. The amount that spilled on the floor alone would probably have sold for $100 in a New Zealand bar. My wife was tipsy, throwing half-glasses of whisky into a patch of dirt behind her to make space for the next pour. Another woman accidentally poured most of her drink bottle into her glass. Men were yelling incoherently. We finished with what I estimate to be $4 trillion worth of 36-year-old whisky that no one appreciated.

Redemption came in the morning. We booked to “walk the peaty path” – drink four drams of whisky in an hour – at Ardbeg. Emma, who was charged with guiding us on the path, read from a sheet after we sipped each one. “It says here this one has notes of blackberry, walnuts, and a hint of marshmallow,” she said. I told her I couldn’t taste any of those things. “Me neither,” she replied.

There are people that can identify every transcendental and possibly illusory flavour in a whisky, she explained. I asked when marshmallow ever passed near whisky in its journey from malt to cask. She shook her head and laughed a little ruefully, then told a story about a well-loved Islay distiller. He was due to talk at a tasting event but the speaker before him was going overtime explaining nosefeel and flavour profiles. The distiller stuck his head into the room, sniffed the air dramatically, and said “I’m picking up distinct notes of bullshit”.

The truth is the whisky industry can be a little wanky. The YouTube videos I’ve seen often feature bespectacled booze professors dipping their noses into glasses and emerging to tell you their drink has hints of speckled acorns and Portuguese appleseed, before telling you to buy a $400 bottle of Macallan.

It’s not wrong to appreciate the unique identities of different drinks or savour a particularly good one. There’s not many things in life better than putting a few drops of water in a dram of Lagavulin 16-year and feeling waves of self-righteousness and refinement wash over you with each sip. But whisky is best enjoyed in places like the Lagavulin warehouse: surrounded by new friends and Scottish men who are trying to make you die of alcohol poisoning. People on Islay seem to get that. They can do a sensory tasting tour with the best of them, but they also know how to party. We asked Paul what his favourite whisky was on our way out of the Lagavulin warehouse: “I don’t drink whisky as much when I go out,” he said. “As I get older I find myself more drawn to Jägerbombs.”

1. The warehouse demonstration at Lagavulin Distillery
Make sure you’ve made plans to walk, bus or taxi home.

2. Walking the peaty path at Ardbeg
A tasting taking in four rare, limited-release whiskies that would cost you $1 billion in a bar.

3. An informal tasting at the Bowmore bar
Taste the Bowmore range on the cheap while you look out over Loch Indaal.

4. Join the Friends of Laphroaig, get your own patch of land, and claim your rent
Laphroaig lets you claim a one-metre patch of land near the distillery in exchange for becoming a supporter. You can claim your rent each year – it’s a dram of whisky.

5. Go to the Ballygrant Inn
One of the world’s great whisky bars. Also it has dogs and cats.