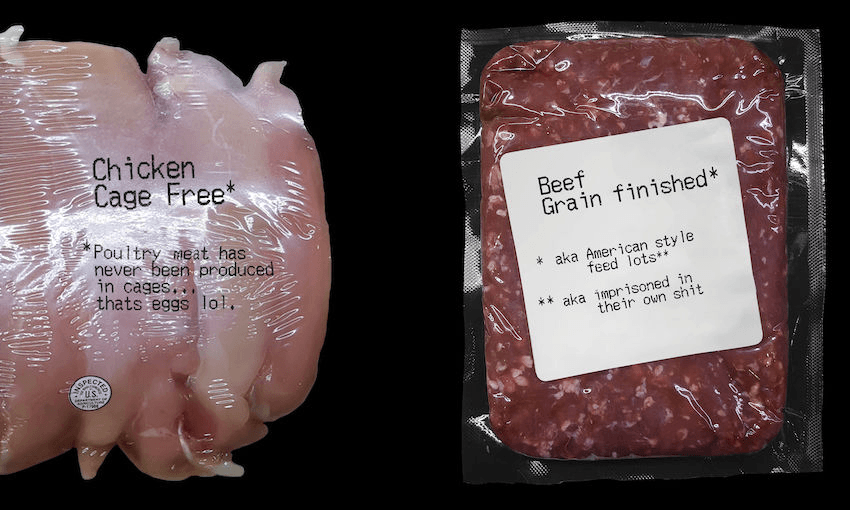 Decoding the language around our meat labelling

Keen to choose ethically produced meat, but feeling thoroughly confused by the options in the butchery aisle? Here, Jane Lyons attempts to shine some light on the murky world of meat labelling, and shares some tips for making better choices.

There isn’t really a guide for meat terms here in New Zealand, just a smattering of cloudy words, a lack of official standards and a whole lot of uncertainty that left me feeling more confused than when I’d started. I’ve sniffed around MPI welfare codes, SAFE, SPCA, meat producer websites and news articles to formulate the glossary below.

Gluten-free French fries and cage-free chicken meat have one major thing in common – they’re absolute bull****. Fried sticks of potato never had gluten and chickens bred for meat in New Zealand have never been raised in cages. If cage-free is the best accolade on chicken packaging, then that is potentially an indication that things are a bit grim.

As for cage-free pork – cages and crates are a reality for a lot of pigs in New Zealand so a promise of cage-free is positive, but that might be where it starts and ends in terms of ethical raising.

Grain-finished meat comes from cattle that have been raised on grass and then moved to a feedlot to consume grain for their last days of life (between two and eight months), a method of feeding that some meat companies believe brings about more flavour and tenderness to the meat. You may remember seeing feedlots in the news a few months ago – the drone images of big exposed pens dotted with cattle looking like ants on a piece of shortbread. Do some Googling to make up your mind about this agricultural process.

Much like free-range, free-farmed (usually associated with pigs) is a bit of a loose term that doesn’t appear to have an official standard attached to it. According to the Hellers NZ website, free farmed means pigs are housed in “eco barns” with open doors allowing the animals to roam outside when desired. But SAFE claims that free-farmed animals cannot roam outdoors. It seems that some larger-scale producers like Freedom Farms believe they couldn’t be fully free-range at the scale they are due to environmental concerns around large amounts of “piggy do do” getting into waterways if the pigs are outside. So they choose to have their pigs live in paddocks for the first bit of life while they’re with their mothers and then be moved to large, open-sided yards called deep straw shelters where the “piggy do do”-saturated straw is composted. Freedom Farms is independently audited for animal welfare standards. Its website says it’s “Farming the Freedom way”, but does that mean they fall in the free-farmed category? Is there a category? I’m not sure.

There is currently no specific industry certification of free range in New Zealand. The Ministry for Primary Industries (MPI) has published a Code of Welfare for pigs, sheep and beef cattle and meat chickens with minimum standards and best practice recommendations (This can be found online at mpi.govt.nz) but this does not include standards for specific claims like free-range.

Independent certification such as the SPCA Blue Tick and AsureQuality (explained below) can be applied for by egg, poultry and pig farms seeking accreditation for high animal welfare standards but this doesn’t necessarily mean the operations are “free range”.

Products wearing the SPCA Blue Tick have been approved as meeting a set of standards called The Five Freedoms. These standards are more stringent than MPI’s Welfare Codes but don’t specifically mean products have come from free-range farms. In an unregulated environment, the Blue Tick can provide some assurance to customers, however, there are concerns over the tick being applied to products from producers like Ingham’s, which might have one “free-range” range with the tick (Waitoa), but offer other products that do not meet standards. In addition to this, the SPCA Blue Tick is paid for by producers, so questions have been raised over the integrity of the accreditation.

As well as providing organic accreditation services, AsureQuality offers an AQ Certified Animal Welfare Mark for chicken and turkey in New Zealand. This accreditation indicates that products have exceeded the minimum requirements in the Ministry for Primary Industries Code of Welfare New Zealand, covering “21 different elements with 111 specific requirements, criteria and measures across Farm, Processing and Head Office activities”.

Certified organic meats have been audited by agencies such as BioGro New Zealand, AsureQuality Limited or Organic Farm NZ to ensure they meet the correct organic standards set by the International Federation of Organic Agriculture Movements (IFOAM). This accreditation can take up to three years and examines the whole growing and production process from soil, water supply, feed, housing, animal welfare, transport and slaughter to ensure producers are walking the talk with their commitment to care for the land and the animals. Aotearoa is currently an unregulated organics market, making greenwashing a common issue in uncertified products as producers can make their goods appear more sustainable than they are. Organic certification is the real deal.

Sorry. I can imagine how you might be feeling at this point. Transparent information is scarily hard to find in this area. With this in mind, I’ve put together a few tips to hopefully clear the fog if you’re a meat eater looking to make better choices:

It’s a fair assumption that there’s not going to be any greenwashing going down when this bad boy is on a label. Look up the certification process online and see for yourself.

If a product has a certification you don’t quite recognise or understand, find the online standards for it and give them a good eyeball to work out how you feel about them.

If there’s something you want to know about their offering that you can’t find online, email or call them and ask. If you don’t get an answer, assume it’s a no.

It can feel embarrassing to ask, but everyone has a right to know where that $7.50 rasher of bacon comes from. Note: always ask nicely, people who are not nice to wait staff are not good people.

OK, maybe an annoying thing to say (extra annoying coming from a non-eater of meat), but if you’re not sure or not feeling good about your options, you can always flag the animal altogether. Or at least for a few meals. Recipe books by Anna Jones, Emma Galloway and Yotam Ottolenghi are good places to find inspiration.