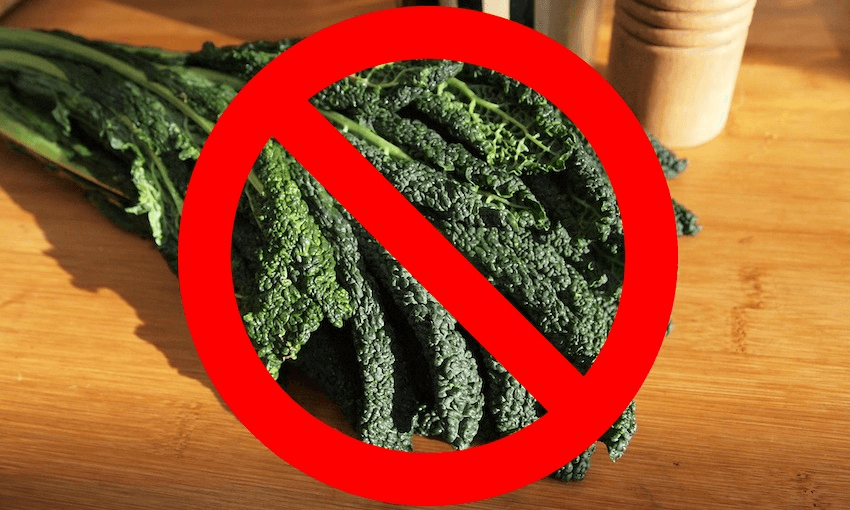 This is cavolo nero, which is a type of kale (we maintain that all types should be cancelled)

Kale is cancelled: Here are five greens that are better

This is cavolo nero, which is a type of kale (we maintain that all types should be cancelled)

The modern zeal for eating this cruciferous crap must count among the most ridiculous food fads of our time, says Amanda Thompson.

I bought a lush salad the other day, not a ‘I really should eat a salad or I might get scurvy’ grudge salad, but an expensive, delicious-looking salad, one I really wanted, full of chopped veges and garlic and parsley and chicken and kūmara and all the tasty things. I shoved a huge sporkful in my gob only to realise that all the curly dark green stuff wasn’t parsley at all – it was kale. Kale. I may have teared up a little in my disappointment rage.

I have always wondered if the worldwide enthusiasm for eating this cruciferous crap started as a joke about how easily people can be fooled. Did a couple of lifestyle chefs have a bet? “Bet you can’t convince most of the wealthiest populations in the world that, with more healthy choices available to them now than ever before, what they really want is indigestible, bitter-yet-bland cattle fodder.” Someone clearly won a fiver there. How else could this have happened? Kale is one of the most ridiculous food fads to ever happen in a civilised society and it needs to stop. More bitter than silverbeet, less tender than spinach, more bland than cabbage – give me one good reason to use kale outside decorative planting on traffic islands in 2002. I’ll wait.

All edible leafy greens are packed full of healthy antioxidants and fibre, all of them – kale is not special in that regard. Kale’s texture is bad in a salad, it becomes pointlessly lacking in healthiness if cooked, and for the love of all root vegetables, once and for all – frying it does not make it into chips. It is ugly and boring and ordinary, the greens equivalent of a pair of unisex pull-on poly-blend chinos. In the great modern food conversation, kale literally has nothing but small talk to say.

We could all easily stop using kale tomorrow and the only losers will be the unfortunate cattle who, once again, will have it chucked at them as a supplementary food in winter. You can still get your vitamins with broccolini or hashtag your healthy-green-fresh-power-liver-cleansing-super-bliss-glow-life smoothie with a meaningless combination of any of those words if you use spinach. In the interests of not ever being served another piece of this shite shrubbery ever again, I give you five healthy leafy greens that are easy to get in shops, easy to grow, sort of like kale but better than kale (it wasn’t hard).

Not a problematic colonising spinach at all, but a handsome native coastal succulent with fleshy leaves, slightly furry stems and an unusual taste, this vast and hardy plant will never die or be bothered by pests. It’s a true supergreen that grows so fast and ferociously in any garden space, anywhere, you might remember that one time you watched Little Shop of Horrors all the way through and start feeling nervous. Tasty and full of healthy things, kōkihi can be eaten any way kale can be eaten but with so much more pleasure it’s not even a competition. Good all year round. Some greengrocers and farmers markets will also have it. 1000% better than kale.

The boring one your nan boiled and buttered and made you finish before you were allowed to get down from the table and play Spotlight with your cousins, everybody has had English spinach. We all have an opinion on it, but regardless of the sad ways spinach has been overcooked in the past, it is versatile and also easy to buy or grow most of the year round. If you are lazy like me and just want to chuck it in a soup or something, you can even get it chopped and frozen at the supermarket. Old-school reliable, only slightly bitter but quickly wilts and gets depressing with age like an overly talented secondary school music teacher. 40% better than kale.

Healthy rainbows! Bouncy shiny colourful greens! Just prettier silverbeet, really, rainbow or Swiss chard is probably most like kale because the big leaves tend to take on a toughness and a bitter edge – if that’s really what you feel is missing in your life. Chard looks great in a salad, is full of good healthy benefits, hardly needs any space or attention and the baby leaves are yum as. You can grow and harvest them small even if you only have a little planter box perched on your front step. Chard doesn’t care, chard lives anywhere. Doesn’t travel well and loses it completely in the heat of summer, but then so do I so no judgies from me. 90% better than kale.

Cabbage (or the leaves from that $10 cauliflower you are about to shred, spice and fry until it looks and tastes like something completely different to cauliflower)

Kales and cabbages, cauliflowers and broccolis are almost the same thing anyway, all these plants being so closely related they could be each other’s stunt doubles. Some people believe eating raw broccoli leaves will give you cancer but – as I told my children when they asked for a ‘life motto’ for a school project – some people are dicks. Dip the sliced stalks in hummus. Broccoli is actually one of my favourite greens when raw, peppery and crunchy, and if you didn’t put the leaves in a stir fry you’d only throw them away – what a waste! Don’t bother growing brassicas though, they all take up heaps of room, get covered in snails and all you end up with is one little deformed cabbage head after about 10 years of love and all of your limited patience. Buy ‘em, eat ‘em up, they’re in season now and at least 60% better than kale.

Parsley is a herb, but you knew that. Did you also know if you let it go to seed and run rampant through your garden and then send your kids outside for ‘just one handful’ you will get about 2 cubic metres of greens with their roots still on to chop up for a salad? Piquant, flavourful supergreens that last well, freeze well, and are jam packed with life-giving health properties, both curly and flat-leaved varieties are underrated as a vege. Big chunks of curly parsley are especially good for mimicking that bouncy, choking property of curly kale, just in case you were missing that. Make salsa verde, make pesto, put it in, on, or next to everything like it’s 1982. 80% better than kale.

Just buy it. How risky can it be? What is it, like $3? Give it a go and see what it’s like in a salad, on a sandwich, in a smoothie. Scrape up your inner adult and actually ask the stall-holder what it is called and how they might cook it. It could be amazing. The worst that can happen is that it turns out to be kale. Extremely high chance that whatever it is, it’s still at least 100% better than kale.