In the mood for some good old fashioned pillaging? Then play Assassin’s Creed: Valhalla. But if you want to have a good time while doing so, probably look elsewhere.

As a New Zealander who hails from a different colonised nation, it should be some weird kind of reverse revenge fantasy to colonise Britain. To do so in a visceral fashion, especially at 4K definition at 60 frames-per-second, should be one of the gaming experiences of the year. Unfortunately, Assassin’s Creed: Valhalla doesn’t quite provide that revenge fantasy. It doesn’t even manage to be very fun.

Valhalla is the 12th major installment in Ubisoft’s flagship Assassin’s Creed series, and the third in its quiet genre reboot, which pivoted the franchise from open world stealth to open world RPG. This entry moves the action to ninth century England as it is being colonised by the Vikings. The player controls Eivor (a fictional character who can be played as either male or female), a Viking raider who ditches Norway with their adoptive brother to settle a new land. Or, more accurately, to steal that land from the people who already live there. As happens with the rest of the player characters in the franchise, Eivor has to deal with the millennia-long fight between the Brotherhood of Assassins and the Templar Order.

The gameplay is three steps forward, but two steps back from Odyssey, the previous Greek-set entry in the series. It attempts to streamline the fairly monotonous sidequest feature from that game, and provide more concrete rewards for the usual Ubisoft collect-a-thons, by letting those collections build up your settlement and your tribe’s presence in Britain. Where the gameplay is unequivocally an improvement over its predecessor is the combat: it is more brutal, faster paced and much more reactive. In Odyssey, it only took a few hours before your character felt like a literal demi-god. Here you’re just a human like everybody else, and the combat expects you to play like one. The fights remain thrilling throughout the game, and the player is kept on their toes, whether they’re just starting out or if they’re hours deep into it. It’s undoubtedly the best part of Valhalla, and for a game that focuses on raiding and pillaging, it needs to be. The rest of the game is business as usual for an Assassin’s Creed game. It’s a massive open world to explore. Your interest in this will largely depend on how invested you are in the setting. Personally, I found Greece to be a much more varied (if emptier) setting, and a much more enjoyable sandbox to play around in. Britain (and a little bit of Norway) has a limited palette that can make it feel like you’re playing a variant on the same level. This isn’t helped by the repetitive gameplay, which is a problem that somehow continues to plague this franchise. After a few hours, you’ve really explored the breadth of what the game can provide, and if you don’t find it immediately gripping, then you won’t have much more luck 50 hours later.

Another thing that prevents the game from being truly gripping is Eivor, who follows the unfortunate Ubisoft trend of being a protagonist that is less a beacon through the narrative, and more an empty projection screen. It’s never clear what motivates Eivor, and Ubisoft tries to split the difference between player agency, by letting us pick what Eivor says and how they react in specific circumstances, and a genuine plot arc, by positioning Eivor as a paradoxically benevolent coloniser. What the game ends up with though, is a protagonist with no depth, unclear motivations, and frankly, no appeal. For a game that tries to be narrative-driven, much moreso than previous instalments, it’s a massive obstacle to get over.

Ubisoft, a company that has been plagued by allegations of sexual harassment and multiple high level resignations, has never been a developer that really, truly engages with the politics of the world it’s depicting. Even Watch Dogs: Legion, which came out just weeks before Valhalla, makes only limp attempts at engaging with the politics that should be inherent in its narrative: a society rising up against a corporation that has installed martial law. Ubisoft couldn’t even take aim at that easy target, let alone hit it, so it’s not a huge surprise that when the entirety of its game revolves around colonisation it doesn’t even load the bullets. 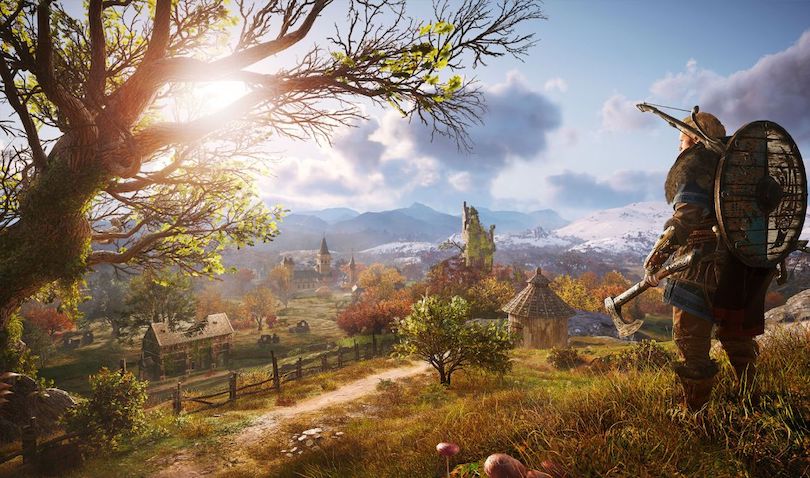 Everything the sun touches is yours to own, but should it be? (Photo: Ubisoft)

The entire point of the game, aside from the overarching conspiracy nonsense which is no more interesting now than it was 13 years ago, is to colonise Britain as a Viking in 900CE, give or take a year. Let’s put aside the revenge fantasy for a moment, and interrogate this. Colonisation isn’t a new concept in gaming; pretty much every strategy game has war or colonisation as its uncomfortable backbone. What’s new is that the conversation around colonisation has progressed to a point where it’s difficult even for gaming to ignore it. It’s bizarre that Ubisoft would make colonisation not just a part of the game, but the backbone of both the gameplay and the narrative, and the justification for everything that you as the player character does. Eivor is here to colonise, and by proxy, so is the player. And… they’re meant to have fun while doing it? Not so much, unfortunately.

One of the key parts of Valhalla is raiding British settlements, monasteries and the like. By raiding other settlements, which is a required part of the game, you gain supplies and wealth to build up your own settlement. In this raiding, you and your fellow Vikings will burn down buildings and massacre enemy combatants. Bizarrely, though, if you kill too many civilians you will desynchronise (this franchise’s version of game over). It’s a choice that’s representative of Ubisoft’s approach to colonisation across the whole game. Raiding a village and burning it to the ground? That’s fine. But killing a villager? That’s evil. It displays either a willful misunderstanding of colonisation or, more likely, a willful reluctance to engage with colonisation and its impacts. Regardless of what you think of colonisation (and if you think it’s a good thing, then, uh, enjoy this game), Ubisoft’s decision to make it the basis of this game but tiptoe around what it might mean to be a coloniser with a conscience is disappointing, and it leaves the game a strange, remote, dated thing.

It’d be easy to ascribe this game’s failings to the classic Assassin’s Creed franchise pattern, which is one good game for one bad game. We’ve already had one great game with Odyssey, even if that didn’t feel very much like an Assassin’s Creed game. So even while Assassin’s Creed Valhalla is the expected bad game, what’s more disappointing is how it fails. The game refuses to grasp the concept at its core – colonisation – and therefore it fails to grip the player. We never understand why we’re doing what we’re doing. Why does it matter if Eivor and their tribe gets what they want? Why does it matter if the Vikings conquer Britain, and what happens if they don’t?

If the game was fun, this would be easy to ignore. God knows, there are many games that revolve around indiscriminate slaughter, war on a mass scale, and senseless violence. But at least they’re a good time. The problem isn’t that Assassin’s Creed Valhalla doesn’t make colonisation fun, although it absolutely doesn’t. No, the problem is that Ubisoft doesn’t seem to understand what makes Assassin’s Creed fun. And it’s not the colonising.

Interested in visual science comms? Siouxsie and Toby want to teach you