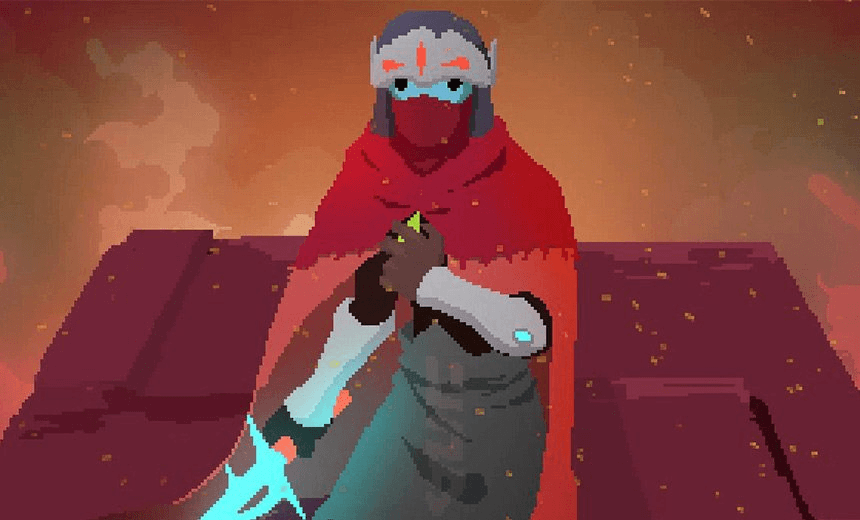 Our own thumb jockey Joseph Harper has a good old whack on a major tribute to old RGPs. He’s bloody into it.

Last week the ‘indie smash’, Hyper Light Drifter was released on PS4 and Xbox One, so I decided to revisit it. This almost goes without saying, but it’s an amazingly cool looking game. Alex Preston and his team at Heart Machine created this as a tribute to the 8 and 16 bit Action RPG classics of yore. The resultant game is fricken beautiful. Hyper Light Drifter’s “ruined world” is a massive, pink, Enter The Void masterpiece.

In Hyper Light Drifter you play as this guy in a cape who carries a light sword and keeps coughing up blood. You can shoot a rechargeable gun. You can cut things with your sword. There is a cool sit down animation. Your main move, though, is this little speed boost dash move. It allows you to jump across long distances and zig-zag your way through groups of enemies.

The game is set in a futuristic dystopia. You’re never told anything explicitly about what happened, but you’re given glimpses of massive robots and stuff. That’s one of the big selling points of the game; the enigmatic way the plot unfolds and the extremely rich world is built. It forces you to engage with it on a level that few games manage to achieve (or even try to). There is no dialogue. Just music, and gorgeous visuals that create a sense of awe. Some players will probably hate it, but it worked like magic on me.

It’s also really hard. Just getting a grip on the dash/slash mechanic takes a fair amount of time. Getting good at it takes even longer. By the time you’ve figured it out, the enemies become super-powerful. You also only have five hit points, which you recharge from time to time. It can be frustrating. But never in a terrible, Teenage Mutant Ninja Turtles from the NES way. It just makes it all the sweeter when you manage to successfully dash/slash your way through a devious cyberpunk horde.

One of the Preston’s goals with the game was to recreate the feeling of a Super Nintendo game, praising the system’s “almost perfect games designed for limited environments.” With that in mind, you have to class Hyper Light Drifter as a huge success. It’s a simple game, you can pour hours into.

It’s a joy to play and the abstract storytelling makes for worthwhile replaying. Cool game. Very good. I like it.

Guys, guys: this content is all because of Bigpipe, the choice as ISP for cool people.