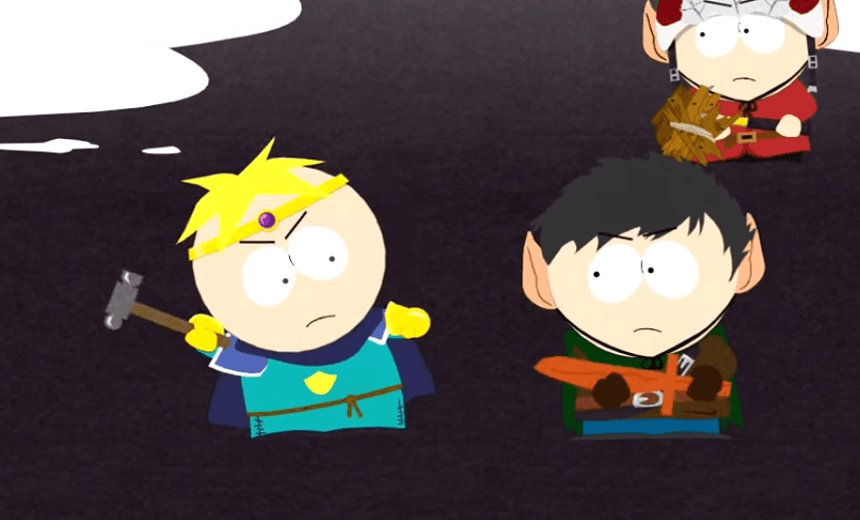 This week I played: Comedy Games

In honor of the New Zealand Comedy Festival Joseph Harper dives deep into a few comedy games. But it turns out that games based on comedy aren’t actually that funny.

The Comedy Fest is happening at the moment and nobody loves to laugh as much as me. So this week I decided to highlight some notable comedy games that have been released for some reason. I don’t mean games that are funny. I mean games that are based on comedy series’ etc. Here are three.

The gen 7 South Park game is an rpg based on the episode(s) where the children get real obsessed with Lord of the Rings. You play as a new kid whose ‘goal’ is to make as many friends as possible. You play through a pretty warped fantasy campaign that ultimately includes Nazis, zombies, aliens, crab people, underwear gnomes and everything else that has ever happened on South Park. There’s tonnes of stuff people would definitely find very offensive, but it’s funny and I liked the armour and weapon upgrades. It’s like Skyrim for kids.

I bought a European copy of this somehow so mine was censored. The scenes that were censored involved the player character getting probed in the butt by aliens, and an interactive abortion scene so I guess fair enough. Still it’s would be kind of weird to have a South Park game that doesn’t feature at least some element of aliens putting a butt probe in someone. I would recommend this game, especially if you like(d) South Park.

Honestly I haven’t even played this because it looks insanely stressful and boring (a difficult combo to pull off). As far as I can tell, you play ultimo daddy, Jim Halpert and you have to run around fetching coffee and snacks for people. All your favourite The Office characters are here and they all look munted as hell. It also features a prank-o-meter and an almost soundalike version of the cool Office theme song. It looks like an excellent piece of shit.

This is the worst game I have ever played. Everything about it is bad. I reckon almost nothing has aged as badly as Little Britain. Is this fine? Is this fine? Is this(?!!?!?) fine? Add to that the world’s most frustrating bullshit gaming mechanics and you’ve got a winner on your hands. I beat this game in a day and not a single second was enjoyable. From the first level where you play as Vicky Pollard and roller skate around collecting cds for some reason, to the weird Pacman clone featuring that fat shame woman, to the only gay man in the village who rides a bike and delivers papers or something. It’s all awful.