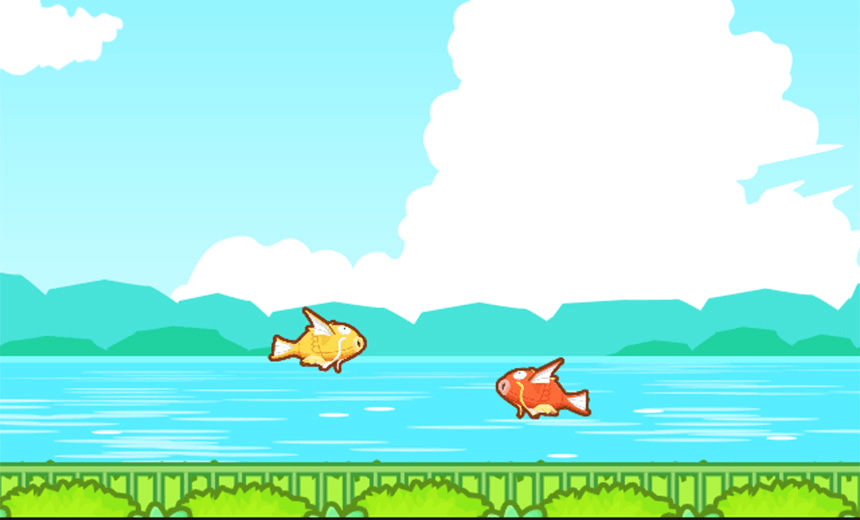 In the soft, glazed eyes of the Magikarp we see a challenge to love that which is unlovable, or so argues Uther Dean.

Magikarp are no one’s favourite Pokémon. Essentially powerless, the limp, flappy fish is famous for its Splash attack that famously, no matter how hard your Magikarp hurls themself into the air, always results in ‘But nothing happened!’ humiliatingly appearing on the screen. Magikarp exists only to evolve into Gyarados, a powerful, fierce looking Pokémon at level 20. Magikarp should have been a metaphor for hidden talent and potential. The meek fishémon that reveals it was really a dragon all along. At the end of day, aren’t we all fish that contain dragons?

But the raw mechanics of the main range of Pokémon games work against this. Magikarp needs to fight, that’s the only way it can gain the XP needed to reach level 20 and show the world what it’s really capable of. That makes it a burden, because it sucks at fighting. You end up resenting your Magikarp as you repeatedly cycle it in and out of battle so it can seem to have been involved and crib XP from the ‘mon that actually won the fight. When you finally get your Gyarados, you treasure it despite it coming from a Magikarp, rather than, as you should, treasuring it because of that fact.

It doesn’t help that Magikarp isn’t the cutest Pokémon. There is a blankness to its stare that makes me think about what Werner Herzog called “the cold indifference of nature”. All which is to say that it is an odd move that the latest freemium mobile game from the aggressively accurately named Pokémon Company is centred almost solely on Magikarp.

Pokémon: Magikarp Jump is an iOS and Android game developed by Select Button Inc. It’s incredibly simple. You catch a Magikarp, name it, feed it berries and train it to increase its JP. JP are Jumping Points. They, somewhat self-evidently, make your Magikarp jump higher. You then take on leagues of other Magikarp in jumping contests. You spend the coins to improve the berries you feed your Magifriend and the training it can do so it gains more and more JP faster. The training sessions are time-limited in the habit-forming way that mobile gaming has long since mastered. You level up and that allows you to catch better Magikarp which can jump higher winning you more leagues so you can train them faster and so on into infinity – the game hasn’t be out long enough for people to discover the level cap. In short: It’s a game that starts off feeling like a Tamagotchi and ends up feeling like Cookie Clicker.

Of course, you can spend money to buy items that allow you to level up your Magikarp quicker but the difficulty against time cost curve of the game is well-shaped enough on its own that it never feels like it’s asking you to pay to play, only play faster.

A day’s play reveals most of what you’ll be getting out of it. The jumping tournament animations are routine enough and don’t escalate or improve in impressiveness as you jump higher and higher. There is, in short, not much to the game. It’s a simple beast.

But, then again, so are Magikarp.

And that’s why Magikarp Jump is so much better than it seems like it should be. By making the crux of the game caring for the most pathetic of the Pokémon and then watching it excel at something it can actually do (rather than what you do elsewhere: watch it fail at something it will never be able to do), the game forces us to see the humble Magikarp in a new light.

It doesn’t attempt to rebrand or rebuild Magikarp. It’s not a reboot, just a remaster. A closer look at our fishy friend, right into their cold, unfocused eyes. When we are forced to care for Magikarp, we see it on its own terms and we start to love it on its own terms. This game does not reduce Magikarp to make it more easily understood, it forces us to work harder to understand them.

The game is full of delicate touches that force you back to loving the Magikarp as a complete and whole individual. If you manage to trick the game into letting you evolve the Magikarp into a Gyarados, it releases it. Game over. It has no interest in Magikarp’s potential, only in its present truth. When you retire a Magikarp and fish up a new one, there’s a tender and odd sequence where the two Pokémon face-off silently.

This is the game ensuring that you consider each of them as separate from the other. They aren’t Magikarp, they are Magikarps. Singular individuals. Your retired Magikarp can be seen swimming through the background of the pond your train your latest one in. They continue the way everyone does. Above the pond is a TV. When you tap it, you’re linked to this music video for ‘The Magikarp Song’ (a song that pre-dates this game, if that matters). It’s a love song to the patheticness of Magikarp, telling us to love them because of their weakness not despite it. Which is what Magikarp Jump is making us do.

And that’s beautiful. In a world seemingly designed around reminding us that we’re not good enough, that we must always strive for nearly impossible ideas of perfection, that we are Magikarp but should be Gyarados, it is delightful to find a game that reminds us to love the patheticness in others.

We don’t need to be able to fight, sometimes being able to splash (or jump) is enough.

This kind of mobile game exists to fill time. To pass unimportant moments while we wait for the important ones. Just like Magikarp is the unimportant moment before Gyarados. By building a game about caring for and praising a thing that lives its whole life in that moment, Select Button Inc and The Pokémon Company have ended up making those moments themselves special and important.

Magikarp Jump teaches us that when you take a moment to really focus on something; even if it’s no one’s favourite, you’ll find a reason to love it. That’s not just beautiful, it’s profound.