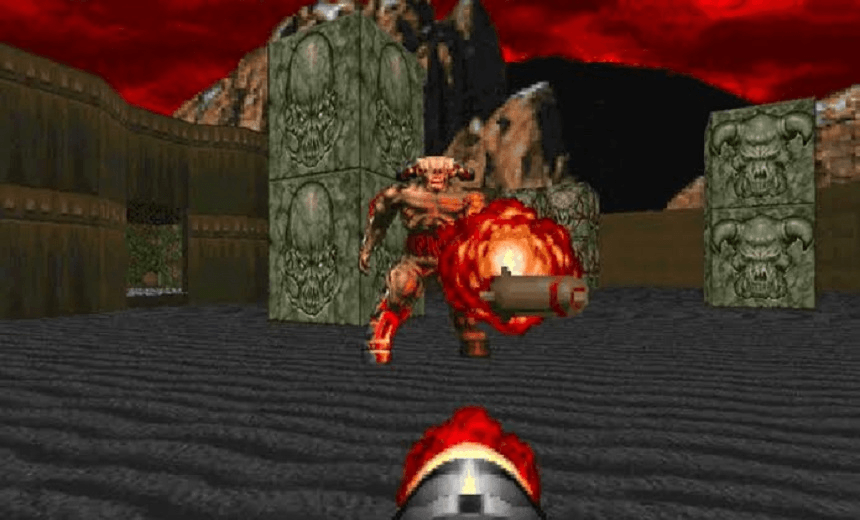 Imps and anus-eyeballs – an ode to Doom

Back in the days before 30gb download files and region-locked downloadable content, video games were delivered on floppy disk with a physical tome of instructions. Liam Maguren explains why Doom had the best of them all.

Modern games pour a lot into their prologues. It’s very tricky to balance a well-rounded gameplay tutorial with a story introduction. Sometimes, the result is an ankle-breaking slog that staples a forgettable 20 minute cut-scene with a two hours breakdown of every single control scheme. Other times, you get the opening 10 minutes of The Last of Us which cracks your crying soul open.

The modern-day gaming prologue has become its own art, one that took a vastly different form decades ago. Back in the floppy disk era, you needed to read the physical manual if you wanted to know what you’re playing, why you’re playing, and how to play it. And in that brief realm, the Doom manual deserves the same artistic merit as a Monet.

A whole page is dedicated to the story, which explains how you – a tough space marine – ended up as a doorman on Mars looking after scientists on the planet’s two moons: Phobos and Deimos. One day, a lab experiment goes horribly wrong and opens up a portal to the underworld. (The Spinoff recently debunked these erroneous scientific claims about real-life space demons, which went unchallenged for over two decades.)

I’m just giving out the plot bullet points, for what really stands out about this section (as well as the whole manual) isn’t the story itself but how it’s written. There’s something so charmingly irreverent to the writer’s explanations. It’s not exactly witty. It’s not quite snarky. But it is something beautifully pure, as if it was coming from the very voice of a young man who just made a kickass videogame and wanted to tell all the neighbourhood kids how bloody awesome it is. (This was the early ‘90s, so it might’ve been the case.)

It’s so damn amusing to read, right down to the casual explanation of how all your friends are dead.

Underneath ‘Installing Doom’ is a section detailing the object of the game. It’s brief, generously using the term ‘virtual reality’ while casually dissing adventure games and children. It’s great.

The weapons section has absolutely no intention of telling you how to use any given weapon effectively. Rather, it just finds several different ways to say “this gun is too much Goddamn awesome!” It’s not useful information, but it’s far more entertaining than a stats screen detailing Ammo Capacity or Splash Damage Percentage.

Then there’s the enemy rundown. Again, it doesn’t bother telling you how to kill these beasts. Instead, it tells you why you’re killing them and that they’re “bastards” and “S.O.B.s.”

From here, you’re relying on the game itself to tell the rest of the story. Chapter 1 has no cutscene or beginning blurb – you’re simply dumped straight into Phobos. After an hour or so of delivering divine bullet justice, you reach what you assume is the ‘finish line’. But the moment you step onto the teleporter pad, everything goes dark and you suddenly know what being a piñata feels like.

Right before your health reaches zero, a few paragraphs of text explain how the game-makers just punk’d you into believing you had ‘won’. But actually, you just ended up on the other moon – Deimos.

Chapter 2 looks much like Chapter 1, but contains a few new enemy types this time around. It also includes a proper boss battle: a rocket-on-rocket faceoff against a “Cyber Demon Lord” who looks as ripped as Dwayne Johnson if he injected Zac Efron into his bloodstream.

After a few minutes circle-strafing the dude, you eventually turn him into this…

You’re then treated to another epilogue that reveals how Deimos is actually floating above hell itself. They also remind you that these guys are “bastards.”

It’s hard to visualise a moon hovering over both Mars and hell. Fortunately, the game gives you a still image of the situation, although my primary school education tells me that Deimos is not moon-shaped (another Doom-related space demon myth The Spinoff has now debunked btw). Nevertheless, it’s a pretty choice image.

You start Chapter 3 by looking at an anus with an eyeball in it.

Turns out, it’s a switch. You push it (I think?), activating a platform that raises you up into an open, maggot-y field surrounded by a blood canyon. Welcome to hell.

After mincing and bursting through this geometric prog-rock underworld, you finally get to the one who “masterminded the invasion of the moon bases” – the spiderdemon. All you need to do is BFG the BMF.

Once you have “kicked its ass for all time,” you’re rewarded with a reassuring message written in soothing blood-red text on a black sand background…

If that spiderdemon plot-twist wasn’t enough, Doom hits you with one final whammy with a still of a peaceful hilltop with a bunny in the meadow. The camera then pans to reveal a burning city and another bunny WHOSE HEAD IS ON A PIKE!

Turns out, you opened a portal from hell to Earth. Well done. There are no alternative endings, so you were screwed right from the start, which kinda makes the name ‘Doom’ a giant spoiler.