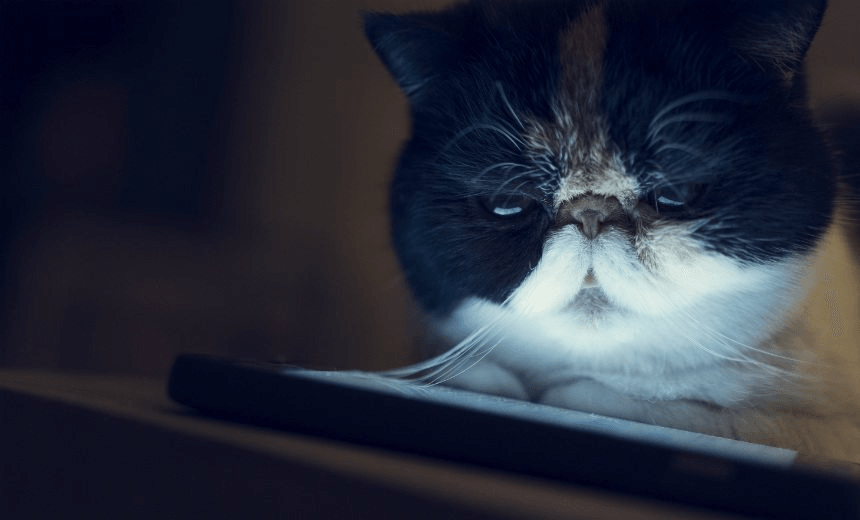 Exclusive: a cat reviews a video game for cats

Joseph Harper shirks his duty and lets his cat Zelda review a game instead. The cat was not impressed.

My cats were going crazy last night. One of them sometimes gets all hopped up after eating kibbles and just wants to play and play. She enjoys the feather-wand and is especially enamoured with this officially licensed Jackson Galaxy fishing line thing that we bought her for her birthday. Sometimes though I have to do work or something and she just stands at the top of the stairs, meowing extremely loudly. She won’t stop unless she gets some playtime action. I love the little beautiful angel, but it can be annoying. Then I read about this game:

A game for cats! I downloaded the version available on the New Zealand app store. It only had one of the three advertised games – the fishing one. But that seemed fine because the fish one seemed like easily the coolest one. I figured this cat video game could raise my cat in the same way my Nintendo raised me. So I downloaded the game.

The next time my cat started going ham, I trotted over, loaded up the app and placed it on the floor. It made little cat noises and splash sound effects, which I reckon is supposed to pique the interest of the cat. It didn’t work. I couldn’t take a pic because me phone was on the floor obviously, but here’s a pretty accurate rendering:

The mechanics of the game are simple. Little colourful fish pop up and you swat them to make them swim back into the water. Swat enough single fish and fish will start popping up in pairs. Your cat racks up the points and then can ‘share it’s high score’ on twitter or facebook. These cats here on the developer’s youtube seem to be very good at the game. Based on my own cat’s reaction, I can only assume these cats are plants who have been paid to pretend to like this cat game.

My cat did look at the fish. She was not even remotely interested in playing. I showed her how to do it via my finger, and also took her paw and put it on a fish, and she honestly looked me dead in the eye and telepathically yelled at me that the game was bad and she didn’t want to play it.

I felt bad about it to be honest and gave her some chicken jerky to compensate her for the emotional labour. Long story short, the cat game is a scam in my opinion.