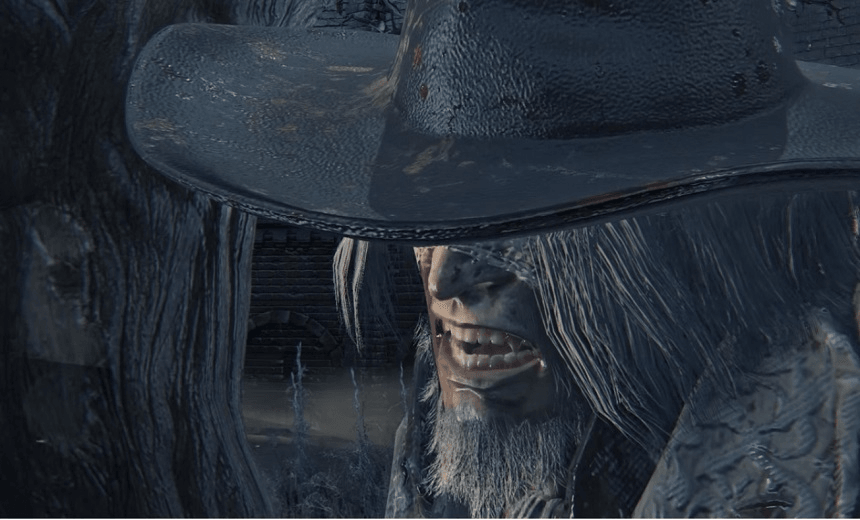 Sick of having his hand held by games made for toddlers, Don Rowe gets masochistic in FromSoftware’s Bloodborne.

One need only switch on their headset while playing online to realise that a significant portion of the gaming community are shrill, prepubescent children. Accordingly, game designers have gravitated in recent times to more simplistic, user-friendly games. Most egregiously in my opinion, the Elder Scrolls games went from an alien, merciless wilderness ready to swallow my anthropomorphic cat-man-mage forever to some kind of weird amusement park ride complete with giant compass, hovering quest markers, fast-travel and all the sort of features that make the game accessible to a thirteen year old.

Bloodborne is the latest in a string of brutally difficult games from publishers FromSoftware which have me convinced their office is a den of code-writing sadists. Set in the labyrinthian gothic city of Yharnam, Bloodborne explores what it means to be terrified in a videogame. Not terrified in the sense of “Oh fuck, something is definitely about to jump out at me,” but terrified like your computer just crashed and you haven’t hit save in three days. Actually, Bloodborne is scary in both ways, usually at the same time.

And I love it.

The aesthetic is Van Helsing meets HP Lovecraft: a gory, demonic cyclone of manic townspeople, gigantic were-beasts, screaming banshees and other near-indescribable horrors. Enemies come from above, below and on all sides, often in overwhelming numbers. Health is limited and the regenerative blood vials take their sweet time restoring what is ultimately a minute portion of the health bar anyway.

Vanquished enemies drop ‘blood echoes’ – the equivalent of both exp. and gold. When death comes, as it inevitably does every five minutes or so, the player’s blood echoes are dropped, leaving a grizzly blood stain representative of the total echoes the player was carrying. Should the player die a second time before retrieving the echoes they are lost forever. Spoiler alert: this happens a shitload, and it never stops hurting.

Because Bloodborne is hard. Seriously fucking hard. For one, there’s no such thing as pausing. I found this out the hard way, hitting ‘start’ and walking away mid-scrap with a werewolf. Of course, the game was still going, and the werewolf proceeded to tear my face off and crush my head like a fleshy creme egg. It’s not a mistake you make twice however – unless the very house is burning to the ground there’s not a damn thing that will pull me away from the screen until either myself or the beast is dead. My new M.O has caused a few arguments, sure, but patching up a relationship is much, much easier than collecting another 20,000 blood echoes.

Navigation is also somewhat of a challenge, particularly considering there’s no map, no compass and no instructions on where to go beyond a linear-ish level design. Players are expected to learn the layout of Yharnam off the top of their head, and they’re expected to learn the old fashioned way; through gruelling repetition. Every death means another trip down the winding alleys of Old Yharnam or a jaunt through the Nightmare Frontier just to get to where you already were before a waddling mass of eyeballs sucked out your soul.

Then there’s the boss fights. Bosses in Bloodborne embody the term OP. Forget your MIRV from Fallout, your top lane Riven and your Eddy Gordo spinning kicks; Ebrietas, Daughter of the Cosmos is about as formidable as it comes. A giant squid thing with a fungus mouth and acidic blood-vomit, Ebrietas is a ‘Great One’, one of six elite bosses the player can fight in Bloodborne. I wish I could tell you about slaying that squiddy bitch, but thus far I’ve never managed to. You need not cross swords with a great one to get your ass kicked clear across Yharnam though. Even early bosses like the flayed, skeletal Blood-Starved-Beast are equipped with frightening speed, titanic health bars and three or four different move-sets to memorise.

It’s a merciless, unforgiving grind at the best of times, but the feeling of success when you finally cut down a boss is virtually unmatched in gaming today. No other game has made me shout at the roof both in victory and defeat, clasping the controller white-knuckled in sweaty hands, just as no other game has left me curled in the fetal position emitting low, desperate moans.

Because it turns out that Bloodborne is kind of like life – brutally difficult with no instruction manual, generally overwhelming, and yet ultimately incredibly rewarding when you get it right. You’ve just got to learn to love the pain.