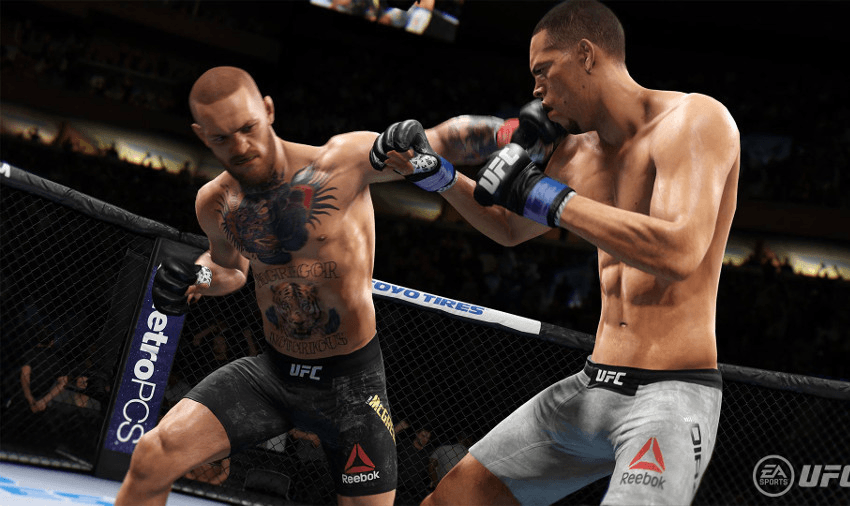 Art imitates life, and that’s why UFC 3 is predictably disappointing

An overly faithful reproduction of the tacky aesthetics of modern mixed martial arts holds back what is easily the best UFC game yet, writes Don Rowe.

Few sports change as much year-on-year as mixed martial arts, and thus the release schedule of the bi-annual EA UFC video game reflects the current state of the sport like no other franchise. The cover artwork alone is a chronological record of the current hot ticket over the past four years: 2014’s EA UFC features Jon Jones, at one time the greatest fighter in the world, now a disgraced drug cheat and felon, accompanied by one time rival Alexander Gustaffson. By 2016 it’s Ronda Rousey, yet to be exposed as a one-trick pony, and an uncrowned Conor McGregor. This year we get McGregor alone, standing triumphant with his famed two belts. Viewed side-by-side, the games provide an example of how hard the UFC pushes a fighter, and how quick it is to throw them aside.

In-game, the first 10 minutes of EA UFC 3 are an animated retelling of McGregor’s ascension atop the UFC, the dominant storyline of the past two years in MMA. And, as has been the case in real life, it completely undersells the rest of the roster who actually fight. Aside from a circus-show foray into boxing, McGregor hasn’t competed since November 2016 and is yet to defend either of his belts in MMA. With the leverage that comes with unparalleled fame, McGregor now effectively holds the UFC hostage, and its investment in brand over athlete is starting to bite.

This is evident in the game’s GOAT (career) mode. As your fighter progresses through the UFC’s feeder organisations, you’re scouted by UFC president Dana White’s TV show Looking for a Fight. Unlike most sports, the UFC as a company has actively and single-handedly shaped the direction and narrative of modern MMA. One of the most excruciating memes pushed by the UFC’s marketing department is that of the vulgar Dana White – a guy who drops million dollar bets while screwing fighters at every opportunity – as some sort of personality. Every bit of literature connected to the UFC pushes his personal brand, and that of the organisation, over any of the fighters. Being pseudo-scouted by a sports oligarch and his goofy cronies is not my idea of a good time. But it is an accurate representation of the way in which fighters must prostrate themselves in the real world and, with the exception of McGregor, take up a position of subservience which endures long past the point athletes are washed-up and permanently damaged.

Mixed Martial Arts is, at times, a deeply embarrassing sport to be a fan of. Though the era of Tapout shirts and Ed Hardy jeans is behind us, MMA is still awkwardly adolescent, and like a teenager, the UFC often sacrifices style for excess. The marketing is clumsy and amateurish, shoehorning up-and-coming athletes into storyline templates – drawn strongly along racial and class lines, like most sports – and at the top of it all is the ubiquitous figure of White. I don’t watch a lot of NFL, but I would imagine those who do are there to see the Tom Bradys of this world, not multimillionaire commissioner Roger Goodell. The comparison is made more depressing when one considers many fighters retain part-time jobs to afford their training camps, unlike well compensated NFL players; many fighters aren’t being remunerated for appearing in UFC 3 either.

On a technical level, the graphics in EA UFC 3 are astounding – the only real clue that this is a video game early on is that McGregor is fighting a legitimate contender. And spare a thought for poor Tony Ferguson, condemned to be knocked out in the first tutorial by a man who may never fight him, piloted by a generation of UFC neophytes who likely don’t know and wouldn’t care anyway. That being said, this is a truly beautiful game, right on down to the blood splatter and knockout animations.

Unfortunately, like seemingly every AAA-release of the past few years, and notoriously those from EA, UFC 3 is replete with opportunities to pay real money in a game you’ve already paid real money for. You can do a little in-game mahi to pick up a few coins if you so desire – 500 to watch a daily ad – but like most microtransactions, it leaves a bad taste. They’re less obtrusive than some, and in the competitive space they’re blessedly absent, but it’s a slippery slope and EA don’t have a lot of consumer goodwill in the bank on this issue.

There are weird bits of shabby design too, like tutorials using Xbox control tooltips on the PS4. But that doesn’t matter so much because, after hundreds of hours in UFC 2, I am born anew with a refreshed soundtrack. It’s still trash, like many sporting games, but thank God it’s at least different. The commentary has been improved too, with more depth and fewer generic lines than previous releases, but it’s obvious that snippets from real fights have been inserted because the sound quality is so starkly different.

Where UFC 3 truly shines is in the reworked striking system. It’s incredibly realistic, and has changed the combat from rock ’em sock ’em robots to something much closer to the game of inches it really is in real life. Kicks are much more laborious and require more energy, but the impact feels substantial and brutal. More ephemeral aspects of the sport like momentum, angles and footwork are represented much more accurately, and while the learning curve is steeper than ever, the satisfaction of really styling on your opponent has never been so good. This is far and away the best MMA simulation ever released, and I think it will age much more like wine than milk.

But this isn’t MMA 3, it’s UFC 3, and thus the tropes which embody the organisation are inescapable. And that’s why, like the sport itself under the UFC, EA UFC 3 will remain a niche release when compared to titans like FIFA.

UFC 3 is exactly like UFC in real life: a strong foundation of exciting athleticism and drama, tarnished by ugly marketing and aesthetics.