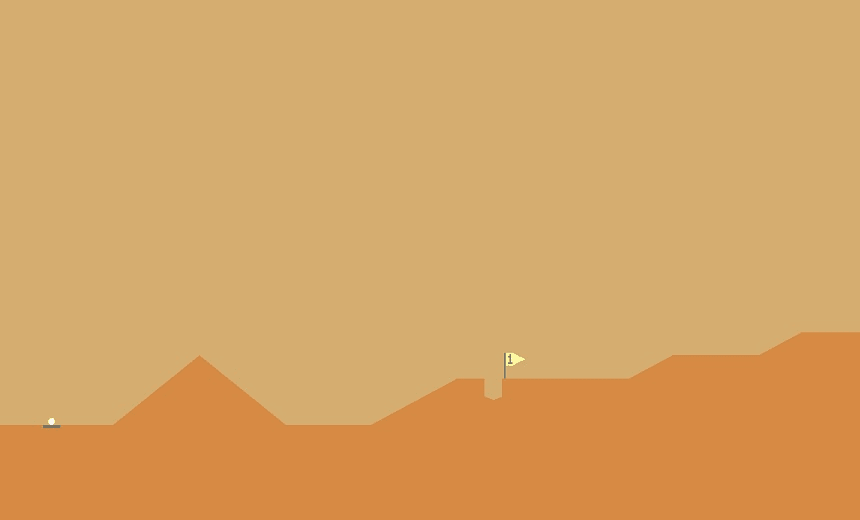 This week I played – Desert golfing and skiing Yeti Mountain

In a mad bout of ‘digital Zen lunacy’, Joseph Harper has accumulated over 13,000 strokes in Desert Golf. He’s spent less time on the slopes of Skiing Yeti Mountain, but both come highly recommended.

The 2K16 working year is well underway and so therefore are my long ass trips to the toilet to play games on my iPhone. I’ve very nearly clocked last year’s sensational Neko Atsume (I need two more mementos from two asshole cats who won’t give up the goods in spite of sashimi on tap), so I’ve moved on to some terrific new games.

“To see a world in a bunker of sand

And a heaven in a wild cactus,

Hold infinity in the pocket of your shorts,

And eternity in Desert Golfing.”

“I saw a single slender pole, and tattered rags around its head.“

Lol get over yourself.

Sometimes there is a bit of water. Sometimes it’s totally flat. I defintely seen a few cacti. Apparently there is a cloud on one level but i missed it. I started playing on Christmas eve and currently sit on the deep blue green of hole 3554, having accumulated over 13,000 strokes. When I started I tried to hit birdies and holes in one. Now I just hit the ball till it goes in the hole. It’s digital zen lunacy.

If you’re like me, you probably spent hours trying to pull of this kind of “Epic Maneuver + Yeti Ownage” on SkiFree back when computers were shitty. If so, you’ll probably enjoy it’s modern successor, Skiing Yeti Mountain from Featherweight Games.

Simply navigate your way down Yeti Mountain, through slaloms, as a surprisingly involved story unfolds around you. There are the usual bonuses. Earning points and unlocking jackets and hats to place on your 8-bit, blackhole lookin avatar thing. It’s all about the little thrill of hurtling downhill, fast. The physics are really nice and make for an extremely satisfying experience, especially when paired with the charming art style, and sound effects. The snow noise is a borderline asmr trigger and honestly makes me feel like when you put a cotton bud in your ear. It’s moderately horny stuff for sure.

Wee flourishes make SYM really fly for me. The deer and birds that run across your screen never to be seen again. The inhalation when you go off a little cliff. The way your arms flap from side to side as you rocket through the courses. Really well done.

The story is maybe a bit ‘so random haha’ and there are in-game ads and occasional pleas for in-app purchases, but they’re integrated into the game/story in a way that makes them much more tolerable. Also, it only costs like $3 to get rid of them.