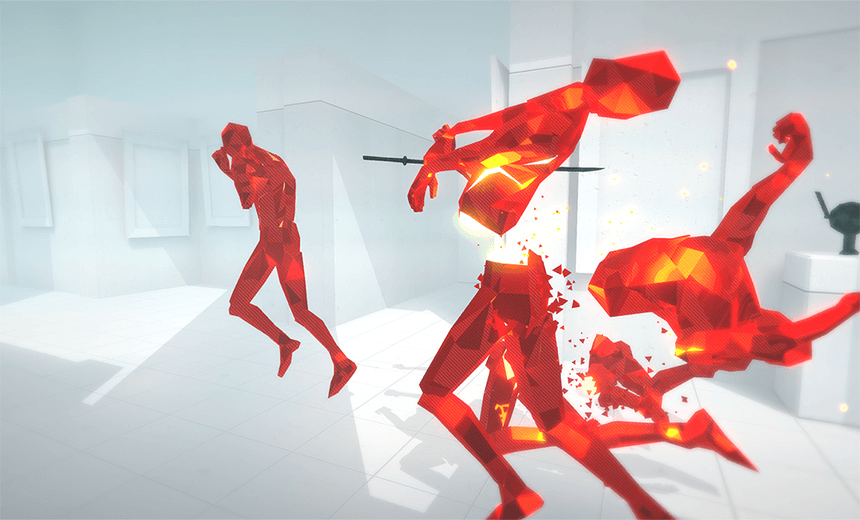 ‘We lose the ability to think critically’: on the danger of hype culture in gaming

Superhot, an innovative critique on the dangers of hype culture and gamer identity, has been ported to virtual reality. But something critical is lost in translation, writes Matthew Codd.

Superhot was one of the most inventive games of 2016. I don’t just mean in terms of its clever twist on first-person shooter mechanics – time moves only when you move, adding a degree of tactics and puzzle solving to the usual FPS mayhem. I also mean its potent, if admittedly obscure, narrative – framed as a game within game, it offered up a sharp critique of hype culture and obsessive fandom that tends to build around soon-to-be-released games.

Content warning: this article includes mentions of suicide, and spoilers for Superhot

Superhot opens with a fictionalised version of the player sitting before a DOS prompt, chatting with a friend. This friend sends them a game called “superhot.exe”, claims it’s the most innovative shooter they’ve played in years, and encourages the player to try it. Thus Superhot starts in earnest, throwing you into a heavily-stylised world of bullet-time gunplay.

As you play through, it becomes apparent that there’s more to superhot.exe than first meets the eye. The game seems to be monitoring your actions, and at a few points it crashes and advises you not to try playing again. It warns you that your interactions inside the game have an effect in the “real” world – hurting yourself inside superhot.exe hurts you outside it, too. Your character becomes obsessed with the game, to the point where they can’t stop playing, and keeps pushing through to see it to the end despite the risks and damage they receive.

This all builds up to an ending where you have to kill your own character in order to become one with the game, at which point it tells you to spread superhot.exe to as many people by telling them this: “It’s the most innovative shooter I’ve played in years.”

Within that rogue AI shtick is a sharp commentary on the hype that so often surrounds new game releases, and how self-destructive that can be when we become so fanatical that we lose the ability to think critically. Long before a game’s even out, we swallow marketing materials like candy, fuelling and building excitement. For many of us, this turns to an almost cult-like fandom, as we convince ourselves that this game, whatever it is, is Next Big Thing and everyone else should be just as excited as we are. We become champions for a game that we’ve seen little of and played even less. At worst, our hype becomes dogma: this game will be the greatest thing ever, and anyone who says otherwise is an wrong, a “hater”, an enemy. And then this fervour we’ve built up spreads like a virus: “It’s the most innovative shooter I’ve played in years.”

The presentation of the Superhot doubles down on all this. The polished white environments and statuesque glass enemies are crisp to the point of feeling sterile, not unlike an overproduced E3 demo video. At the start of each level, words flash up like title cards on a teaser trailer – level names and clues to what’s ahead, but all taking the form of the sorts of meaningless buzzwords and performative military lingo that pepper every press release. “Unfinished business”. “Watch your six”. “Tough day.” The very title of the game might be the epitome of buzzwordiness – what does “super hot” mean, other than “really damn good”? “This game is super hot, man.”

Superhot VR, on the other hand, is missing something. It’s a reimagining of Superhot for VR platforms – not quite a port, not quite a sequel, but something in between. It broadly follows the same structure as the original release, but with mechanical changes to accommodate VR and a mix of old and new areas in which to play out your bullet-time shenanigans. The story largely follows the same trajectory, and canvasses the same themes, but it’s a truncated version. In some ways, it builds upon what Superhot did, but in a way that only really works if you’ve played that game. If you’re coming into Superhot VR without that groundwork, it doesn’t make a lot of sense and much of that powerful subtext is lost.

Superhot VR has the same metanarrative in place: you’re a character in the in-game “real” world, playing the “most innovative shooter you’ve played in years” by way of a series of floppy disks (remember those?) given to you by a friend. As you play through, things become twisted, and the game starts asking you to do things like jump off buildings and shoot yourself in the head.

The same core message is there – “obsessive hype is self-destructive” – but Superhot VR lacks the chat-based narrative interludes that drive that message home. In their place are scenes where you have to put new floppy disks in, doing bizarre things like pulling them out of the computer screen or inserting them directly into your head. For reasons I can’t fathom, Superhot VR also drops the “most innovative shooter I’ve played in years” moment out of the ending, and that’s really the thing that ties the whole narrative together.

The frustrating thing is that VR is a perfect platform for the sort of story that Superhot tells, and some key moments work better in VR than they ever did before. Both games involving figuratively killing yourself to become one with superhot.exe, but in Superhot VR this involves physically stepping off a roof or holding a gun to your head and pulling the trigger. Those are powerful, dramatic moments, and with the right context they push Superhot’s core themes better than any other tool in the game’s kit.

Virtual reality also brings a level of immersion that the original Superhot could never manage, helping you to get lost in the game, and the game within that game. Shooting involves aiming motion controllers and pulling triggers, while you duck and weave to dodge bullets. I’ve never played a more active VR game, to the point that my legs hurt for days afterwards (you’re basically doing squats repeatedly for the entirety of your play session). Every shot, every thrown bottle or shuriken, every dodged bullet feels like you’re the one doing it – and for a game that’s all about losing your mind in a virtual world, that makes a big difference.

I just wish that the original story was kept intact for Superhot VR. What’s here works, but only on the condition that you’ve played Superhot and know what it’s all about. Without that, it’s vague to a fault, and I suspect many will write it off completely. For most people, that’ll be fine – after all, Superhot VR is a whole lot of fun to play, leg pain notwithstanding – but I wish it had the same depth to go with that fun, like its predecessor did.