In general, I’m not a fan of artistic crossovers – more often than not, the new work ends up compromising what made each individual component great – but video game crossovers tend to work better than most. Gamers tend to be more forgiving of changes in genre, style and tone, if it means spending more time in whatever world they originally fell in love with. Persona 5 Strikers might be the peak of the video game crossover.

The game, published by Altus but developed by Omega Force, represents the meeting of two long-running series that have lent themselves bizarrely well to crossovers. The Persona series started as a dark horse spinoff of the Shin Megami Tensei series revolving around teenagers forming relationships with demons to save Tokyo from a biblical threat, and became a mainstream hit with the release of Persona 5 in 2017. It’s no surprise why that was the one to break through: the fifth entry gave the entire JRPG genre a massive shot in the arm, being so sensorily rewarding that even casual fans couldn’t stop playing it (which is a good thing, because you needed at least 100 hours to even finish the damn thing once). Not since the heyday of Final Fantasy had a JRPG been designed so thoroughly to be deliriously enjoyable to play, from the stylish comic-book graphics to the jazz-rock score. It was a game where opening the menu was more of an event than some games have in their entire run. Some games put you off, this one begged you to play it.

The other part of this crossover is a franchise that is loosely defined as “Musou” (or “Warriors”, as its been redubbed in English). The premise of the Musou games is simple: there are a bunch of characters to choose from, the player picks one, and mashes buttons across various battlefields until there’s nobody left. It’s repetitive, but highly addictive. The franchise, which started with Dynasty Warriors, an adaptation of the 14th century Chinese novel Romance of Three Kingdoms, has since spread to encompass the Sengoku era, the legend of Troy, the Attack on Titan series, the Gundam series, and even Zelda. Now it’s taking on the Persona series.

If all that sounds dense, don’t worry: Persona 5 Strikers is actually shockingly accessible. The cast of Persona 5 Strikers, in all their Phantom Thief glory (Photo: Atlus)

The story starts with Joker, the teenage protagonist of Persona 5, returning to Tokyo while the rest of the gang, the Phantom Thieves of Hearts, are on summer break. Before long, they’re having to deal with the Metaverse (the bad place, basically) which is tormenting the populace of Tokyo once more. The battlegrounds of Persona 5 were Palaces, metaphysical representations of various villains and their specific crimes.. A gym teacher who sexually harassed his students had a dungeon where monsters looked like literal dicks. That sort of thing. The Phantom Thieves stole the “Heart”of each villain (the thing that makes them want to be an awful person, these games are not subtle) and the villains ended up publicly apologising for their crimes.

This time, instead of Palaces, we’ve got Prisons, and the villains are Monarchs, guilty of abusing their powers to reach popularity. The first one is a popstar, the second a popular YA author, and so on. Although the difference is largely cosmetic, there’s a softer side to the villains in Strikers; this game is less interested in punishing them for the wrongs they’ve committed, and more invested in finding out what’s missing from their lives to make them act this way. It’s a softness that fits the shallower nature of the game itself. Unlike the original, this isn’t a game to sit down and play for eight hours straight, but something to be picked up for an hour here and there. You don’t want to have to try to figure out where you are in the plot while navigating the punishing mechanics of time management that were a core part of the original’s gameplay, while also maintaining social relationships with seemingly the whole of Tokyo. You just want to hack and slash at some demons with some demons of your own.

The battle mechanics are the ideal blend of both worlds: all the complexity and sensorial splash of Persona 5, combined with the simple Musou pleasure of mashing a button and seeing health bars across the screen go down. Where Strikers goes a step further, in a direction that the Musou series would do well to follow (especially considering the dire ninth entry), is in its strategic focus. There are countless enemy weaknesses to exploit – and keep track of – here, and just as many environmental opportunities to do the same. The Musou games have one battleground, but the Prisons have many smaller skirmishes, and the decision whether to engage and or retreat is much more fraught;. the stakes feel higher.While not all of these mechanics would work in a Musou game, they absolutely work here. When you’re in the thick of it, the Persona-Musou crossover is a match made in peanut-butter-and-jelly heaven. 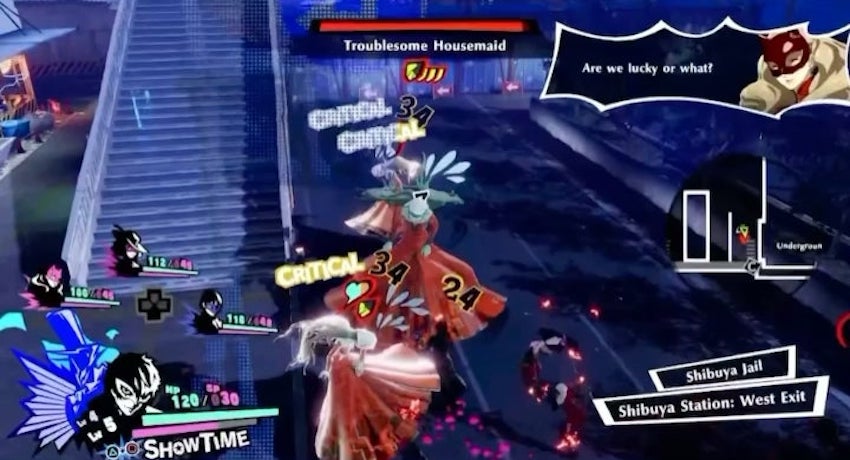 It’s not a perfect game, though. The remarkable breadth of the Musou series – the latest Dynasty Warriors had 90 playable characters – always necessarily relied on a certain shallowness in the characterisation. But here, that lack of depth is more apparent – and disappointing. The Warriors-style gameplay is better than it’s ever been, taking liberally from the mechanics of the original Persona 5 – pacts and ambushes included – but the writing is thinner than any previous Persona game, spinoffs included. While more or less every Persona game descends into a fight against an apocalyptic force derived from the Book of Revelations, that predictability is mitigated by the emotional investment we’ve made in the cast of characters, with vivid character designs and compelling motivations making up for a lack of intellectual insight. With Strikers relying so heavily on the player’s investment in the original game (it makes the mistake of completely sidestepping last year’s expansion, Royal) the characters wear a little thin over this game’s 30 hours. Absence makes the heart grow fonder, shallow writing wears it out quickly.

Reviewing a game like Persona 5 Strikers can end up feeling a bit pointless. People who love the Persona universe routinely gag for another chance to romp around in it, regardless of genre. Fans of the Musou series will mash buttons in any setting, whether it’s 3rd-century China or a planet in the unknown future. What makes this game special is that it’s the most accessible either of these games will likely ever be. If you couldn’t find a way into Persona 5 because it’s 100 hours of incredibly dense mythology, you’ll be able to get into this (but I sincerely recommend you at least give its predecessor a shot). If you can’t get into Musou games because they’re repetitive and too button-mashy, the gloss and sheen of this game should be enough. If you’ve never engaged with either series, now’s the time. Crossovers don’t get much better than this.

Persona 5 Strikers is available on PS4, Nintendo Switch and Microsoft Windows. The reviewer played it on a PS5.