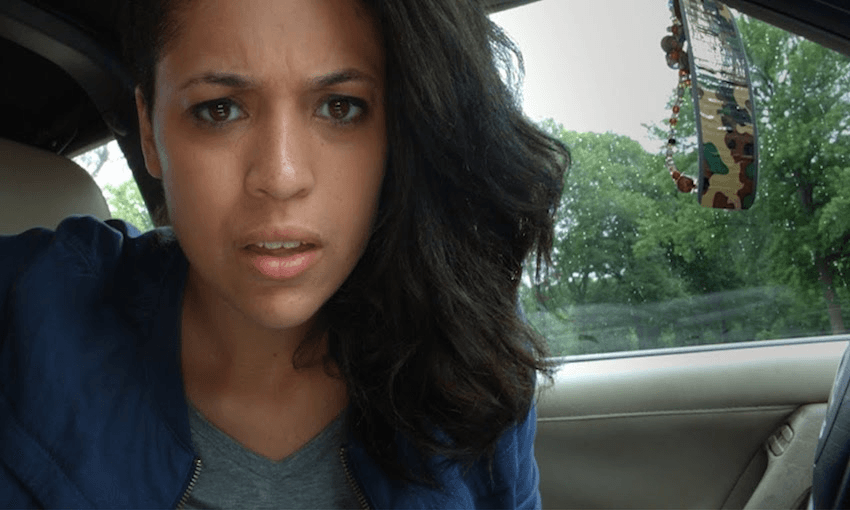 This is my face after playing #WarGames.

#WarGames demonstrates what is wrong with writing in video games

This is my face after playing #WarGames.

The latest from Sam Barlow pushes the form of both video games and TV – but the writing lags behind it, Sam Brooks writes.

Back in 2015, I was a big fan of Her Story, creator-writer Sam Barlow’s award-winning game that precedes the recently released #WarGames. In Her Story, you were left to figure out a decades-old crime based on taped interviews with the lead suspect. It was a game for the classic millennial stalker: you typed in search words and videos featuring those words would pop up, and you would draw links between videos based on what words were spoken by the woman. Sometimes it was people’s names, sometimes it was an exact time or a certain place. It nailed the idea of being an investigator, even if not the reality. But at that point it didn’t matter – you were already invested.

Even though the writing, which is frankly psychology and creative writing 101 level stuff, left something to be desired, the interactivity made up for the lack of realism, as did the performance of lead actress Viva Seibert. For an hour and a half, it’s a compelling game, and even better as a formal experiment – a starting point rather than an end goal.

As a continuation of that game, and a confusing kind-of-adaptation of the 1983 film, #WarGames is about as successful as you might assume a game with a hashtag in its title would be. While Her Story was largely let down by its writing, #WarGames is let down not just by the writing but by the form as well.

#WarGames is more a television show than it is a game. It’s a very slightly gamefied version of watching multiple YouTube tabs at the same time, or having a Skype call with people you’re not friends with. In #WarGames, these people are Kelly, a hacker, and her various hacker friends (we’re never let in on how she knows these people, why she’s a hacker, or how she’s acquired the skills that make her quite good at hacking). Her friend tick off a list of tropes and cliches: there’s the weird European girl (Torch), there’s the moody, dark and handsome broody guy who looks more like an ASOS model than any IT dude you’ve ever met (Jeff) and most bizarrely and worrying, there’s the twelve year old boy (Zane) who says things like ‘why so serious?’ and ‘for the lulz’ with no irony whatsoever.

The game unfolds – although in fairness, it would be more accurate to call this game a piece of interactive fiction than a game – like a low-budget web-series. In a potentially cool twist, everything is delivered via cameras. Usually it’s your standard front-facing laptop/phone camera but sometimes they’re security cameras that have been hacked, and sometimes we’re shown clips that have been stolen from somebody’s computer. In practice, it just means that you end up staring at people who are also staring at cameras.

Which brings me to the hook of the game, a hook with no perceivable pay-off. One of the big sells of the game is that it watches you as well, by which it means it tracks what screen you’re watching and adjusts the story slightly to adjust to it. There’s the chance for this to be huge – who doesn’t experience their screentime these days by constantly switching between tabs, apps, messages and things they started watching but didn’t finish, or wanted to read weeks ago but are still sitting in an unclosed tab on their browser.

But the game doesn’t do anything with this mechanic. Switching screens doesn’t seem to actually change the game or story any, and there’s no real satisfaction to be gained by switching screens to watch someone else, except if it means not having to watch one of the other screens. (I could do without having to see a balaclava-wearing actor do his damnedest to emote ever again.) At no point in the two and a half hours this game lasted could I ascertain what was actually changing and what would matter if it did change. More often than not I decided to just watch the protagonist’s screen. She was the most interesting character, and Jess Nurse’s performance lent the character more specificity and depth than the writing did.

Which, honestly, is less to do with the uneasy deployment of this mechanic and more to do with the game’s writing. In terms of narrative, the story makes little sense. It’s implied that Kelly is trying to clear her mother’s name after she died in a war zone overseas, and throughout the game the hackers manage to have a huge influence on international politics, even inciting an entire (undefined, North African) nation to protest. On a character level, it makes even less sense. Characters are thin, with motivation that is hazily defined at best, and it’s incredibly difficult to figure out where they come from and why they’re even hanging out together.

And then finally, and this is the nail in the coffin, these characters do not talk like recognisable humans, interact like any human you’ve ever met, or even behave in a way that is consistent with the wildly unrealistic limits that has been set up for the characters by the game. They talk and behave in such a disjointed way that you can almost see the writer staring at the screen willing for the words to come out because he has no idea what to write. They seem to come less from a person’s brain than from a scrambled together list of tropes and references.

Video games have a writing problem, in general. If you put #WarGames on television, or marketed it as a web-series, which it is much closer to in regards to its form than it is to a video game, then it would be absolutely slaughtered, or worse, ignored. What we, as gamers, accept as good writing in video games is usually what we’re told is good writing in television. Think of how closely the earlier BioWare games bend over backwards to try and emulate the wisecracking comedy of a Joss Whedon, or what we’re told is good writing in novels – think of the old fantasy tropes that the Final Fantasy series largely trades in.

Video games, or at least their writing, is still trying to emulate what works for other mediums, and many developers are stuck trying to fit a CD into a laptop with no disc drive – it doesn’t work anymore, it doesn’t fit the format, so you need to adapt. I don’t know what adapting looks like yet; even when I think of the games I think have the best writing – the Suikoden series, DanganRonpa, even Metal Gear Solid at its most gonzo – they’re still taking many of their cues from other media. But it won’t look or sound like this. No matter what form you’re working in, if you don’t understand what makes people tick, or at least understand how to convey that through action, dialogue and narrative, then you’re pretty much screwed.

#WarGames is doing its best to try and adapt and push the form of gaming a bit ahead; it’s trying to figure out a new way for us to consume a video game narrative and engage with it. But without the building blocks that make us want to engage with any narrative in any form whatsoever – good characters, engaging narrative, something relatable – it fails utterly. It’s not even good, as Zane would say, for the lulz.