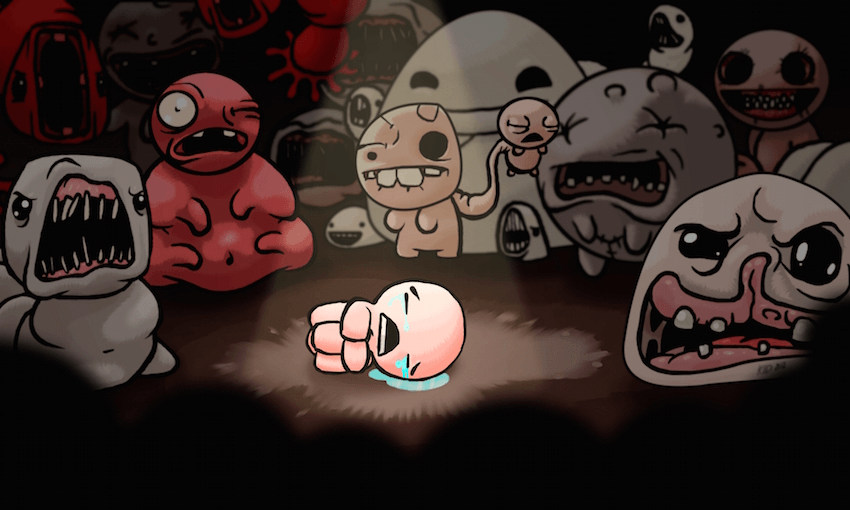 2014’s The Binding of Isaac is the sad game that keeps on giving.

The Binding of Isaac: The sad game that keeps on giving

2014’s The Binding of Isaac is the sad game that keeps on giving.

The Binding of Isaac was the indie cult hit of 2014. Josh Davies examines what makes this game so compelling four years on.

I am addicted to this game called The Binding of Isaac. I love it. I have been playing it since it was released and don’t plan on stopping. Instead I am going to convince you that whatever your current favourite game is, you’re wrong. It should actually be this.

Originally released in 2011, it was remade and rereleased as The Binding of Isaac: Rebirth in 2014. I was at university when this version came out, and the themes of isolation, disillusionment and depression really hit home. I wasn’t at my happiest or most ambitious that year (that would be me at age four, when I wanted to be a dinosaur and had made some strong strides in both roaring and having teeth) so instead of putting my head down to get a PhD in Palaeontology, I was instead hating every minute of class and spending all day playing on my PC. Any media that reflects that funk (the bad kind) and makes it funky (the good kind) is very easy to latch onto, helping you find the silver threads woven into that sad sack you’ve been rolling about in.

I bought The Binding of Isaac: Rebirth on the day of release; since then I have spent a total of 2671 hours inside its world and counting. Not consecutively, of course – I’ve reserved it for times when I was meant to be at lectures or writing articles for online digital news outlets.

The Binding of Isaac has a very simple premise. Isaac, a small child, and his evangelical mother live alone in a house on a hill, and one day God tells his mother to kill him, so the titular Isaac is kind of in a bind. First, his Mummy Dearest takes away his pants and locks him in his room, saying that he has sinned, and now she’s going to get all murder-y, to use a technical term. (This probably reminds you of the story where capital-G-God tells Abraham to kill his son, for good reason.)

Isaac finds a trap door leading to the basement and dives in, finding that the basement is filled with monsters, demons, and your average sentient faeces. And now, he has to fight his way out. But how, I hear you ask? Well, like all kids, Isaac, learns that his tears are a powerful weapon. Literally, you cry and your tears kill the monsters, demons and sentient shit.

All the playable characters in the game are the biblical bad boys and nasty girls – Cain (of Abel fame), Judas (the traitor) and Eve (fruit Judas), all of whom you later learn are just facets of Isaac’s creative spirit trying to find itself, manifesting themselves in him wearing a wig. The story is told almost entirely through visuals with no dialogue aside from an opening narration. This allows you to imprint your own perspective onto Isaac, and makes his 2D lo-fi self more human and relatable then most AAA video game characters.

For example, to get stronger you pick up items that allude to a past that, if interpretation is anything to go by, wasn’t at all pleasant – items like a chemical peel that make you stronger but burn your face, a wooden spoon that makes you move quicker, and a can of dog food that gives you health. Isaac starts as a pristine child in the first basement but as he goes deeper in he begins to look more like the monsters he is fighting, growing stronger through relics of self-harm and abuse. But it’s not all gloom and doom – there’s also a party hat item.

To put it bluntly: I like sad stuff. I like things that don’t shy away from the bleakest aspects of life. A lot of society ignores the fact that one day we will all die but I find that finality to be… fascinating? In The Binding of Isaac that macabre nature is sincere and reverential where as many other forms of media seem to hold subjects like death or evangelicalism at arm’s length attempting to talk about them without submerging themselves in the darkness.

The Binding of Isaac taps into my desire to see that stuff. Its macabre approach is sincere and reverential, whereas many other forms of media, especially video games, seem to hold subjects like death or evangelicalism at arms length. They attempt to talk about them without submerging themselves in the darkness. Ed McMillan, who also made popular indie game Super Meat Boy, is the main creative voice behind Isaac – he grew up in a very religious family and clearly brings that personal experience to the game

It’s quite hard to justify thousands of hours in a game other than saying, “I’m an adult, you’re not my boss, shut up’’. I could say the soundtrack plucks your heartstrings, and I could even make up some stuff about how deep down we’re all just crying little boys making biblical allegories in our mind. But really, at its core, the reason is the game has a huge variety, an astoundingly well-refined progression system, easily learned but hard to master mechanics, and it’s just really, really fun.