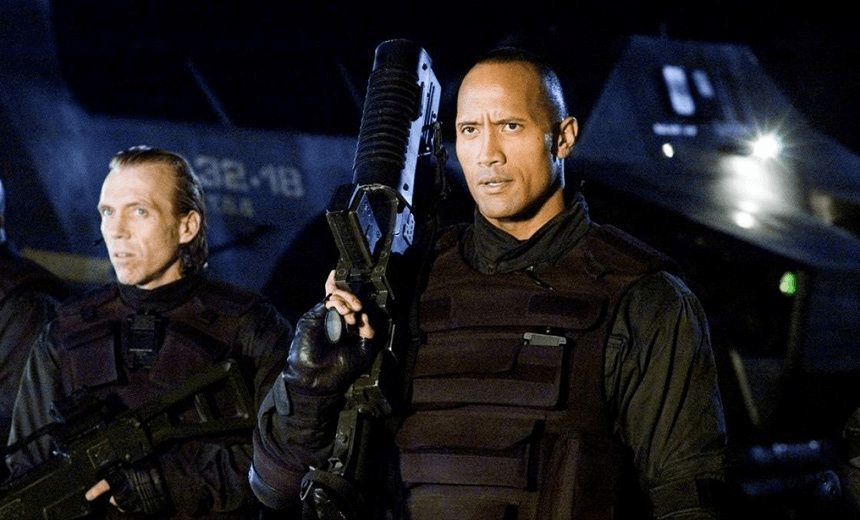 The Donbox is a regular series where killing machine Don Rowe watches a movie based on, inspired by, or just damn ripped from a video game. This week: Doom’s 2016 iteration has been celebrated the world over for it’s faithful honoring of the franchise’s roots. How does the 2005 film adaptation compare?

Two minutes into Doom the first arm is torn clean off, blood spraying like a pressurised hose and painting a door red with abstract art. It’s the hyper violent, gratuitous gore fans have come to know and love over the past two decades, and should have set the stage for a romping action film worthy of the franchise.

Instead it was the beginning of almost two hours of pseudo-Alien ambushes and The Rock saying ‘fuck’ a lot for emphasis.

Doom is the story of a squadron of space marines sent to investigate a disturbing series of events at a research facility on Mars. Despite the events taking place in the year 2040, where inter-dimensional travel is considered blasé, this marine is still playing a Gameboy from 300AD.

If the aesthetics of fiction design the future, things sure will be ugly. Automated doors and halogen are the name of the game, and the military is plagued by the most obnoxiously clicky weaponry since American Sniper’s baby. Space scientist Pinky does have a sick wheelchair to be fair though. And for some reason, the bra has gone out of fashion.

So too has quality control in the military. The Space Marines in the RTTS squad consist of a greasy perv, a child, a dude with possible PTSD, two capable black guys, a token Japanese dude, a religious fundamentalist called Goat and The Rock. They’re uniquely homophobic and transphobic, in that early 2000 jockish tradition. Near the start of the film the blonde solider man talks about getting a room with a bottle of tequila and three “lady boys”. Later he tells the kid “you know, when I asked for some pussy I didn’t think I’d get you.”

The blonde homophobe is also a drug addict and a psychopath.

Goat flagellates himself with a hunting knife for that hugest of indiscretions:

Mack spends half the movie guarding Pinky, and gets one line in Japanese plus half a radio call before he’s unceremoniously decapitated by a Hell Knight. I should have known he’d go first. With two black dudes plus The Rock, Mack was the obvious token.

Over the next hour of flashlights in the dark there’s some pseudo-scientific nonsense about the human genome and the soul, but the plot is on the lighter side even of the 1993 game from which it gleaned its name. Nary a mention of Hell either, which is kind of integral. To the entire series.

But then, in a twist I honestly didn’t see coming, The Rock goes full heel. After massacring a bunch of redeemable scientists, he shoots The Kid in the throat before being pulled through a nano-door by a bunch of demons.

The climax of the film is a first-person action sequence lifted directly out of the game, and is surprisingly similar to the 2016 iteration, just with worse graphics.

And in a fight to the death with evil Dwayne Johnson, we discover his true secret – he’s a masochist who loves being choked.

Final analysis: avoid this adaptation like it is the plague. And if you’re forced to watch it by your thinly disguised monster of an editor? Collect pity from your work colleagues and friends.