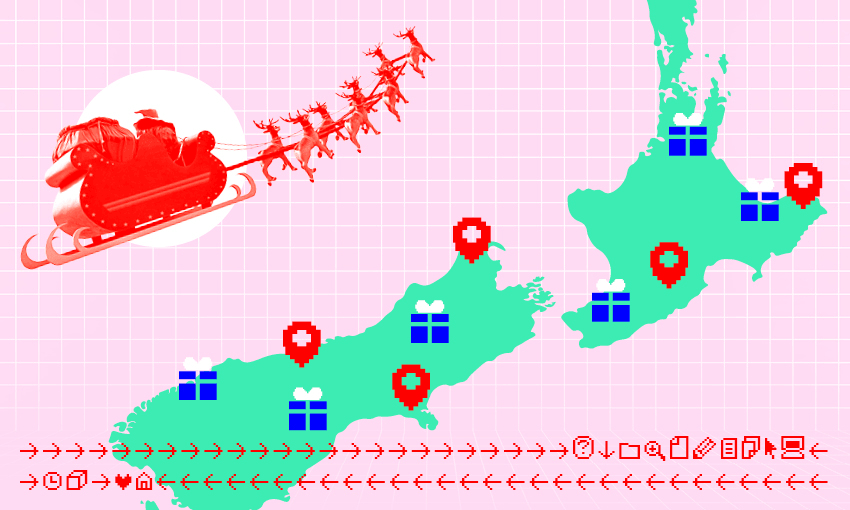 High-tech resources have been deployed to help US children track Santa’s journey for decades, but New Zealand kids have missed out on the fun. For IRL, Dylan Reeve looks into the local organisation fixing that problem.

For years, Aotearoa’s tamariki were left out in the cold when it came to tracking Santa’s journey on Christmas Eve. However, advances in technology and the efforts of local experts have meant that, finally, our kids can watch Santa (virtually) as he wings his way towards us.

In 1955, the Sears department store in Colorado Springs placed an ad in the local newspaper telling local children that they could call a special telephone number to speak to Santa Claus, but a typo meant that instead of publishing the store’s Santa hotline, the number in the ad was actually that for the US Air Force’s Continental Air Defense Command (now called NORAD). That’s the secretive military operation charged with detecting incursions into United States airspace by, they feared, Soviet nuclear missiles or bombers.

After the phone started ringing, the legend goes, the commander on duty, Col. Harry Shoup, advised his staff to report the current location of Santa to the children calling. Thus began the tradition of the US military using their immense resources to track and publicly report the location and progress of Santa on his mission to deliver Christmas presents.

Unfortunately for New Zealand’s children, limitations in radar coverage over the vast Pacific Ocean that Santa crosses towards us from the North Pole, as well as our time zone, have meant that the traditional efforts of the US military to keep American children up-to-date on Santa’s journey have been useless in Aotearoa. NORAD’s systems often don’t even get a lock on Santa’s sleigh until well after our tamariki are already in bed.

Fortunately, advances in technology, specifically GPS technology and high-speed satellite communications, have changed the game in recent years, and local forecasting service WeatherWatch has been able to harness these advances for the benefit of New Zealanders.

“The supercomputers we use for forecasting are able to tap into satellites in order to track Santa’s movements from the North Pole all the way to New Zealand,” explains WeatherWatch chief forecaster Philip Duncan.

However, given the value of Santa’s cargo of gifts, especially at the beginning of his journey, there are security concerns that have to be taken into account. “We have to switch our tracking off before midnight,” Duncan says. “There’s a lot of interest in where he is, so we have to be careful about exactly how specific we are.”

To help maintain Santa’s operational security, the WeatherWatch Santa tracker only provides hourly updates of Santa’s progress as he takes off from the North Pole at around 1pm on Christmas Eve, NZ time. The last update is delivered at 11pm, just as he’s on final approach to Cape Reinga.

The early tracking provided by WeatherWatch isn’t just popular with New Zealanders, either. “We get children from America watching our site. They post comments saying ‘don’t forget us, we’re on this street, in this suburb, in this state’,” says Duncan. “I just love it. They don’t want to wait an extra day to see Santa’s progress.”

WeatherWatch has big ideas for the future too, with plans already underway to improve the tracking for next Christmas. “We’re in talks with people about a more detailed experience next year, because we think there’s a lot more we can tell people about his journey,” adds Duncan, with excitement in his voice. “We will add weather information about conditions on his journey, and even departure conditions in the North Pole. He takes off in freezing temperatures, and arrives in a summer climate here. There’s quite a lot of variation along the way.”

Santa’s massive work day begins on take off from the North Pole a little before 1pm New Zealand time on Christmas Eve. Got kids keen to keep an eye on Santa’s approach, or maybe feeling curious yourself? You can track jolly old St Nick’s progress starting on the WeatherWatch Santa Tracker, and then, the next day as Christmas Eve moves around the world, at the NORADTracks Santa website.