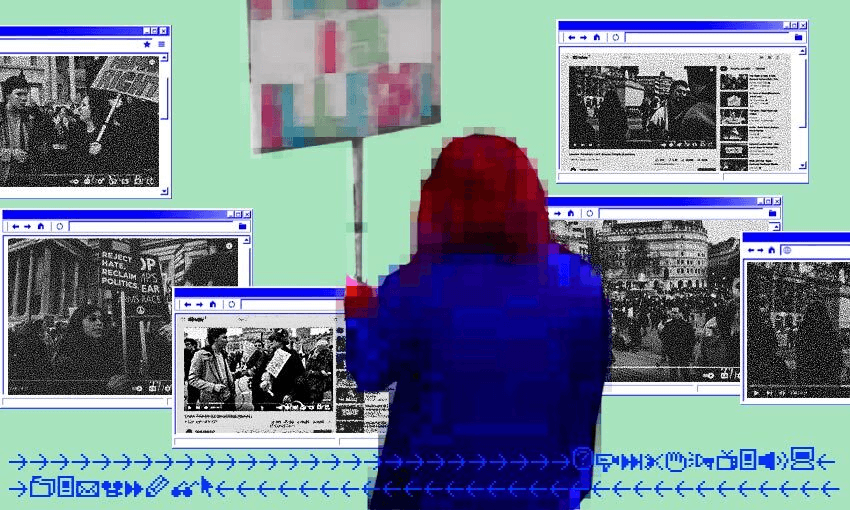 I was the ‘abortion girl’ on a viral far-right video

Image: Tina Tiller
After a far-right YouTube personality aggressively vox-popped her for his video at Women’s March London, a New Zealand woman watched in horror as she went viral. She shares her first-person account for IRL.

As told to Madeleine Holden.

When I heard about Women’s March London in 2017, I knew I needed to be there. I was living in Shepherd’s Bush at the time, and I wanted to be part of the international movement protesting Trump’s election and the fact that he was a misogynist, white supremacist and all-round terrible human being.

I knew the demonstration was going to be huge, and it was: more than 100,000 people turned out to protest the US president. I went with a friend of mine and we stayed the whole day; spending hours walking from the US Embassy in Grosvenor Square in Mayfair to Trafalgar Square in central London. By the time we arrived, it was late afternoon, and when two guys rocked up on a push bike with a sound system, we joined the impromptu party that formed around them. It was a really friendly atmosphere, and I was dancing and feeling great.

Suddenly, I became aware of a person approaching me. There was light in my eyes and I couldn’t see clearly, so initially I thought I was being approached by a hot, pixie-cut lesbian. By the time I realised the stranger wasn’t a lesbian but just a boyish incel holding a camera, I had a second guy – a very posh-talking, Slender Man figure – thrust a mic in my face and start firing questions at me. I was like, “What the fuck is going on?”

I now know the man was Caolan Robertson, a then-nascent far-right YouTuber, but he didn’t introduce himself or his project at the time. When someone sticks a camera and mic in your face, you freeze. I had no idea what was going on, but I figured if I stayed calm and answered his questions, I would get out of the situation soon enough.

I first got the sense Robertson was trying to trip me up when he asked me twice what I was doing at the march even though I’d already answered, and after he asked me a few hypothetical questions about abortion, I decided to disengage. The whole exchange lasted about 30 seconds and I assumed the footage would be unusable. Because Robertson was focused on abortion, I figured I was probably talking to an anti-choicer. I didn’t realise how much worse he actually was.

The next morning, my friend sent me a panicked text message. “Oh my God, that guy, he’s called the New Brit, [the video] is on Facebook.” When I clicked the link she sent, the video already had 100,000 views. It was boosted by Breitbart UK, which sent it into the stratosphere: it blew up all over Facebook and on Robertson’s YouTube channel. I couldn’t stop watching and reading the comments. Once it got to a million views, I just went numb.

Because I had engaged with Robertson’s questions and he didn’t selectively edit my section like he did with other interviewees, a lot of the comments focused on me, calling me the “abortion girl” or the “Aussie girl”. The comments were horrific and violent; the gist being that we were all stupid and deserved to be raped. They were threatening to do a whole lot of shit to all of us.

I felt sheer terror at this point. I was in shock and I started panicking that I would be identified by some of these far-right men in the street. All they knew about me is that I was the “abortion girl” who “refused to engage in an argument”, and that made them really, really angry.

I completely locked down my social media accounts and got rid of my profile photos. If it wasn’t for my anonymity in the video, things could have been much worse than they were. Still, the fear of these very vocal men who really hate what I stand for didn’t go away for a really long time.

The experience changed how I viewed protests and demonstrations. I had always felt safe and empowered before then, attending relatively small protests in New Zealand which didn’t tend to be infiltrated by counter-protesters and far-right celebrity hopefuls. They were always welcoming and safe spaces, and I’d never really seen them get invaded like that. I’m a lot more cautious about attending those kinds of events now.

This was just shy of five years ago. Since then, Caolan Robertson has renounced white supremacy and now works as a “counter-extremism advisor”. He’s doing his thing and that’s great, but I don’t think anyone who’s been a victim of someone like him can ever fully trust that kind of narrative. He’s left a lot of damage.

To this day, I believe abortion is a human right, and I’m never going to apologise for that. But thinking back, my experience made me really militantly attached to those views. I was like, “How dare you try and shame me for this. Fuck you, I’m just going to do even more work with this, I’m just going to get even more feminist.” You end up getting really, really defensive.

I can’t even imagine being vox-popped like that now; we’ve become even more polarized than we were in 2017. It makes me think of all the anti-vaxxers and their protests and videos, and how violent people are getting. It’s so easy to forget that we are all human beings with thoughts and feelings and families. We don’t deserve to be thrown on the internet and used as props for someone else’s narrative.

If we reduce people to 10-second soundbites we deny their humanity, which is exactly what happened to me. I know that as a white lady who is not often read as queer, it’s easier for me to hold this view (and do this work) than it is for others who have been targeted by the far right, but this experience taught me to talk to people I don’t agree with and to ask them questions without initial judgement. This has opened a lot of dialogue and I’ve built bridges this way.

If we don’t meaningfully engage with people when we have the chance, we’ll never make things better.

Do you make your living in the gig economy? Tried to delete your internet presence? Met the love of your life in a strange way online? If you’ve got a great yarn about the internet impacting your life, get in touch with us at irl@thespinoff.co.nz.